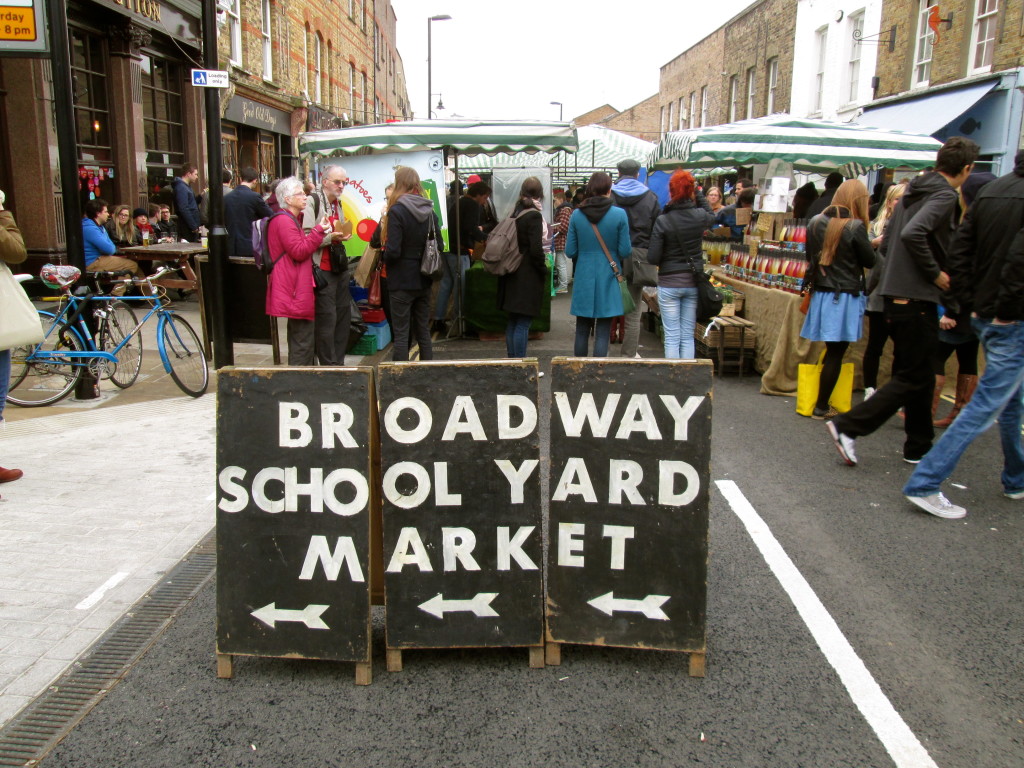 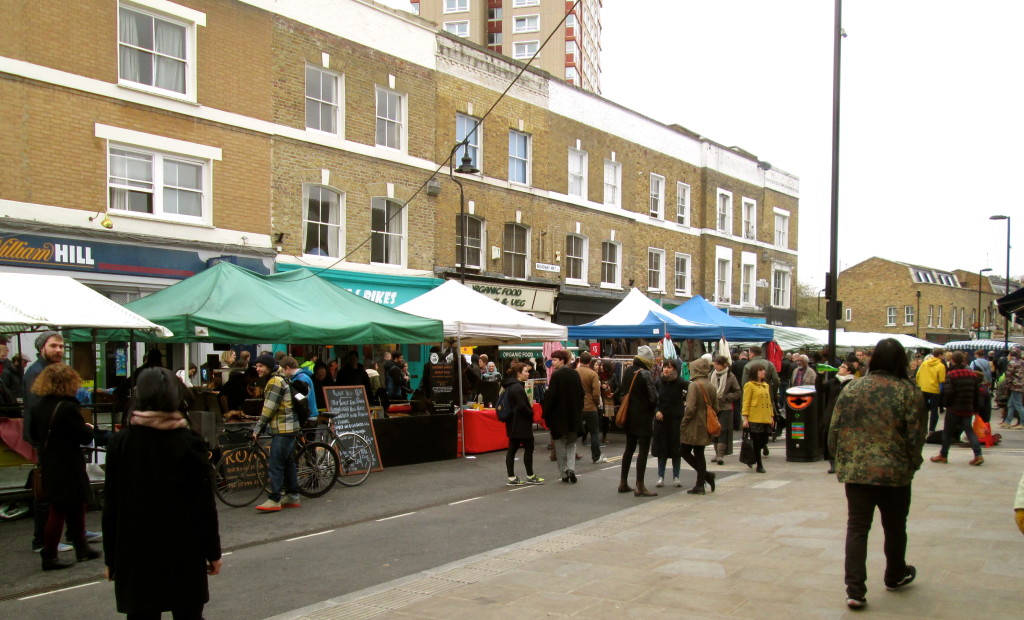 As I’ve mentioned previously, I’d love to do more backyard blogging and writing about the incredible city that is London. One of the best cities on Earth, there is no shortage of restaurants to try, museums to visit, and neighbourhoods to wander through. In keeping with this, I’m starting a series here to highlight some of my personal favourites, the things I think make it so amazing to live here. I get a lot of emails asking for advice on visiting London, so hopefully this will help. To those not planning on being in London anytime soon, I hope that the articles will still be interesting and entertaining… and that maybe they’ll entice you to visit sooner rather than later! 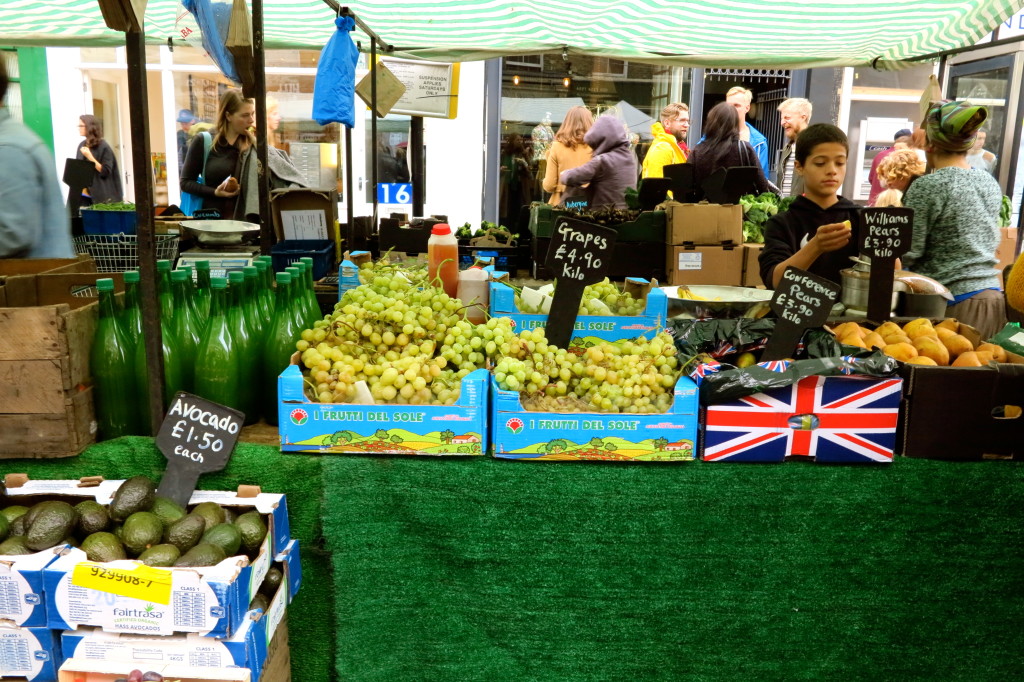 My absolute favourite thing to do on a Saturday in London is visit Broadway Market. Found along Regent’s Canal in East London, it’s where I buy all of my vegetables, cheese, bread, and other sundries for the week. I’m not alone; according to their website, 90% of people attending the market live nearby, and buy their weekly groceries (or at least a few treats) to bring home. And that’s what I love most about Broadway Market – the fact that it is so community based. It is small enough that you can get to know the stalls quickly, and that the vendors will start to recognize you. Nearly everything is local, organic, and freshly made, from the smoked salmon to the mushroom risotto to the red velvet cupcakes, and, whatever you fancy, you’ll be sure to find it here. Broadway Market isn’t just for food, either; vintage clothes and jewellery, used books and records, and tons of other knickknacks fill the stalls. It’s part food market, part craft market, but either way you’ll find something you’ll love. 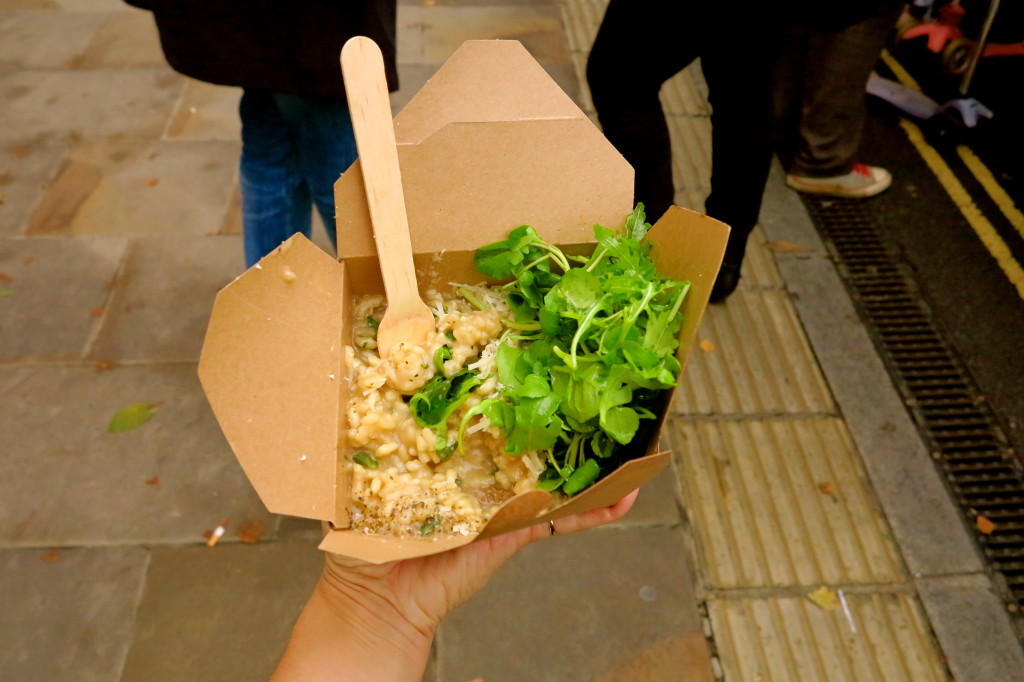 The best risotto I’ve ever had, from Sporeboys 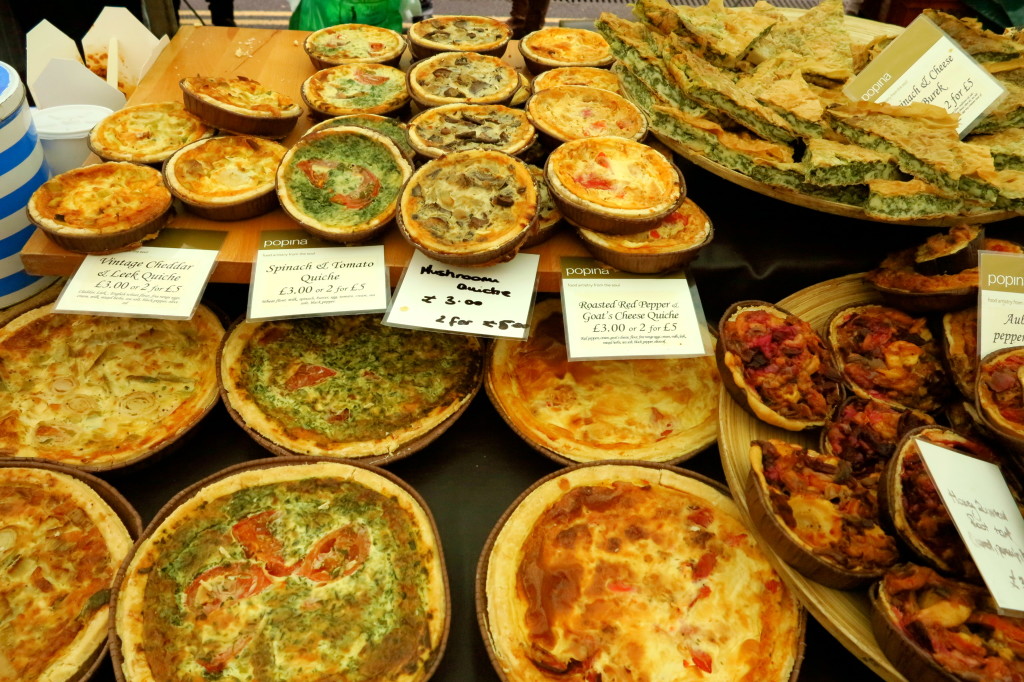 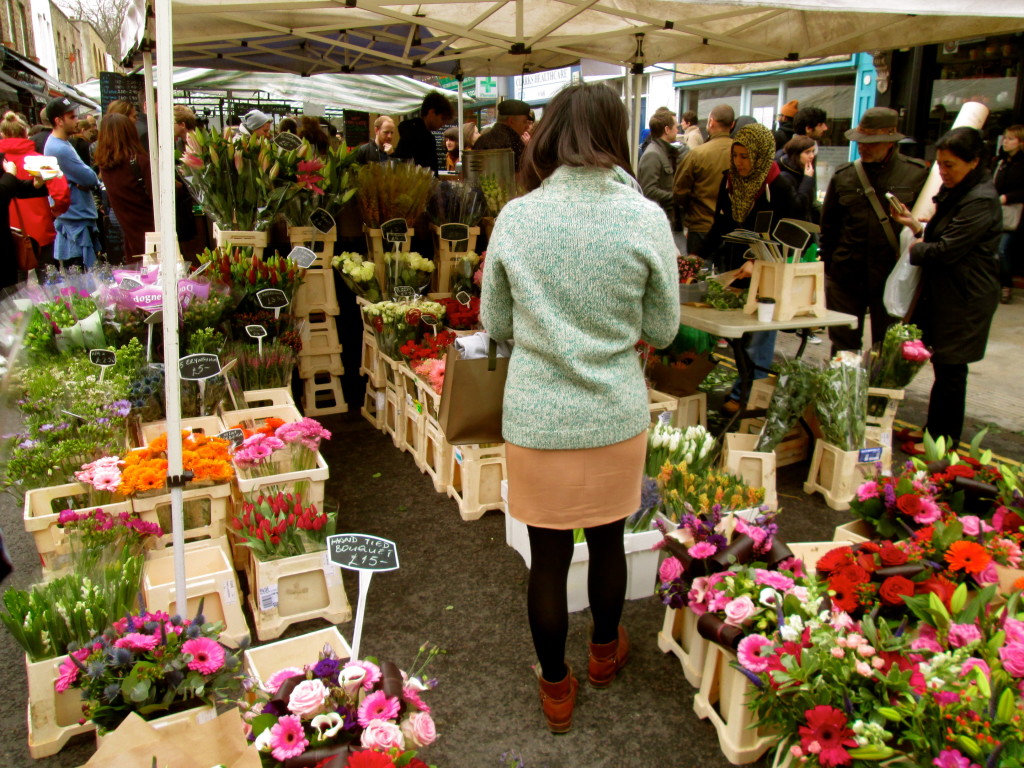 What’s so fascinating to me is the history of this market, and of this neighbourhood. Broadway Market was established when a jellied eel shop, now F. Cooke’s Pie and Mash Shop, was opened over a hundred years ago. It soon turned into quite a flourishing market. Though it lost speed throughout the century, dwindling down to just a few stalls, the community banded together and reopened it in 2004. Since then, the neighbourhood has prospered again, bringing lots of new businesses and residents, including me – there’s nowhere else in London I’d rather live. 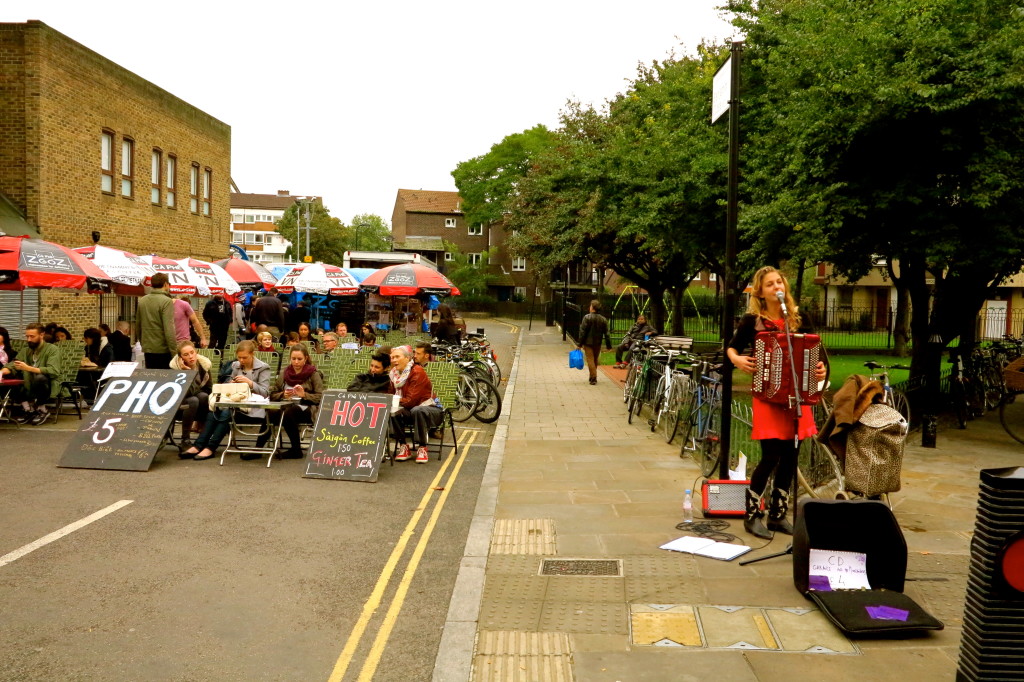 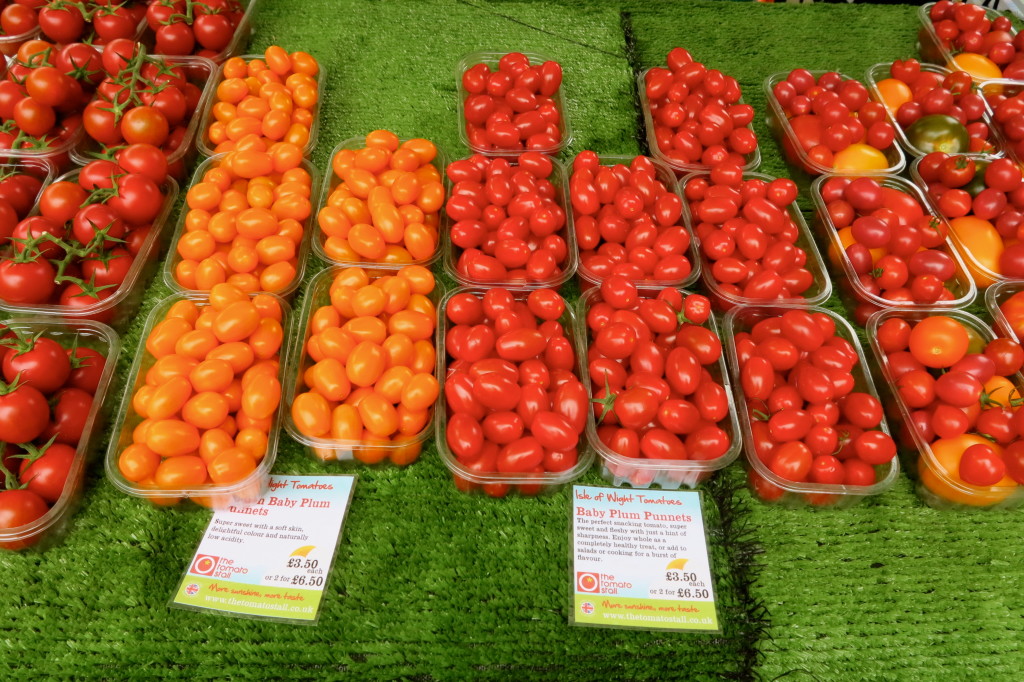 That being said, one of the ongoing debates about Broadway Market and the development it has procured is, of course, the issue of gentrification. Parts of East London used to be seen as a dangerous place to live, but more and more families and young professionals are moving in, replacing abandoned warehouses with upmarket apartment buildings. I can’t avoid this reality; it’s happening on my very street. I’m one of those young professionals, in fact. Around 40% of Hackney’s properties are social housing, and it will be interesting to watch what happens to this neighbourhood over the next decade. 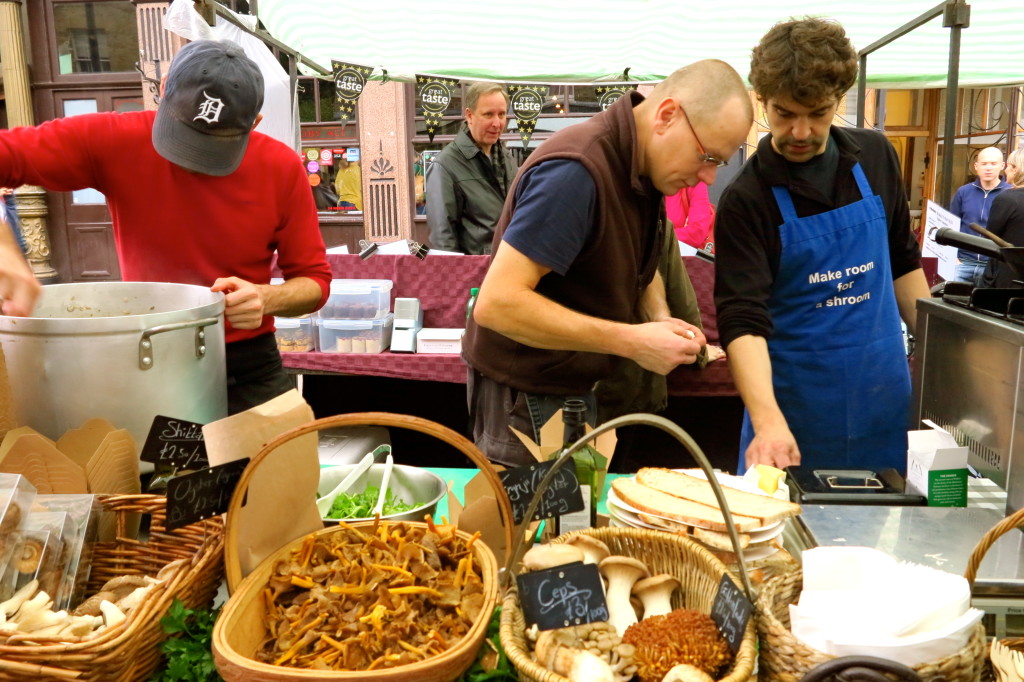 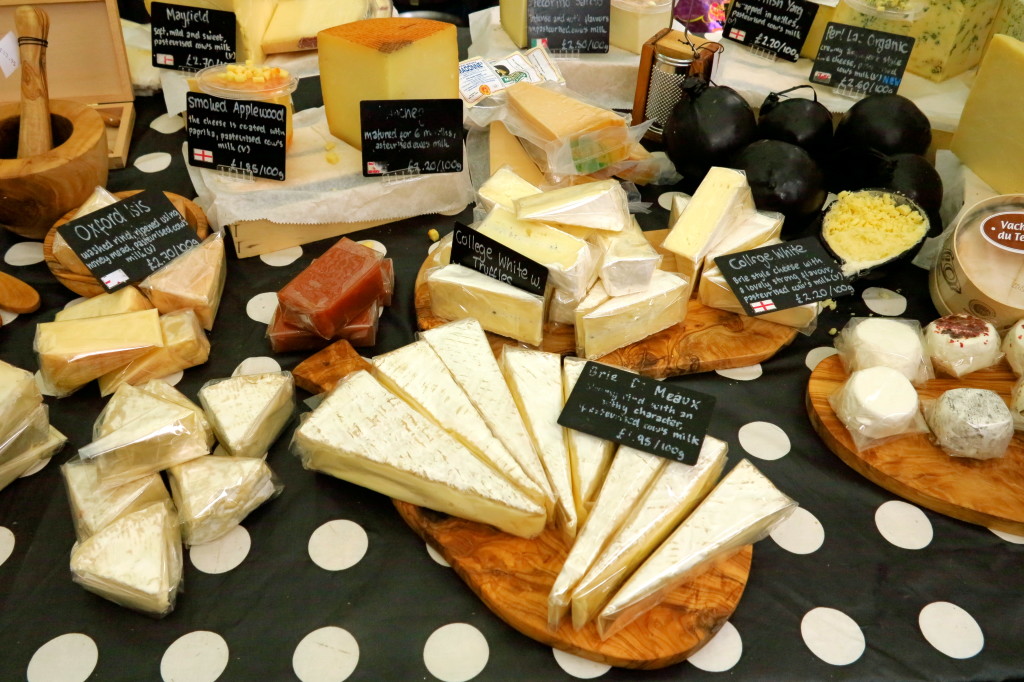 At this point, however, I see Broadway Market as a very good thing for the area. It brings people together, brings people outdoors, and encourages people to purchase local, healthy food. It has helped to make the area safer and cleaner. It has made East London, and specifically Regent’s Canal, a beautiful place to be on a Saturday. Whether you’re here to sample the delicious food, catch some great live music, or just gawk at the locals, I highly recommend visiting Broadway Market. And if you see me, please say hello. 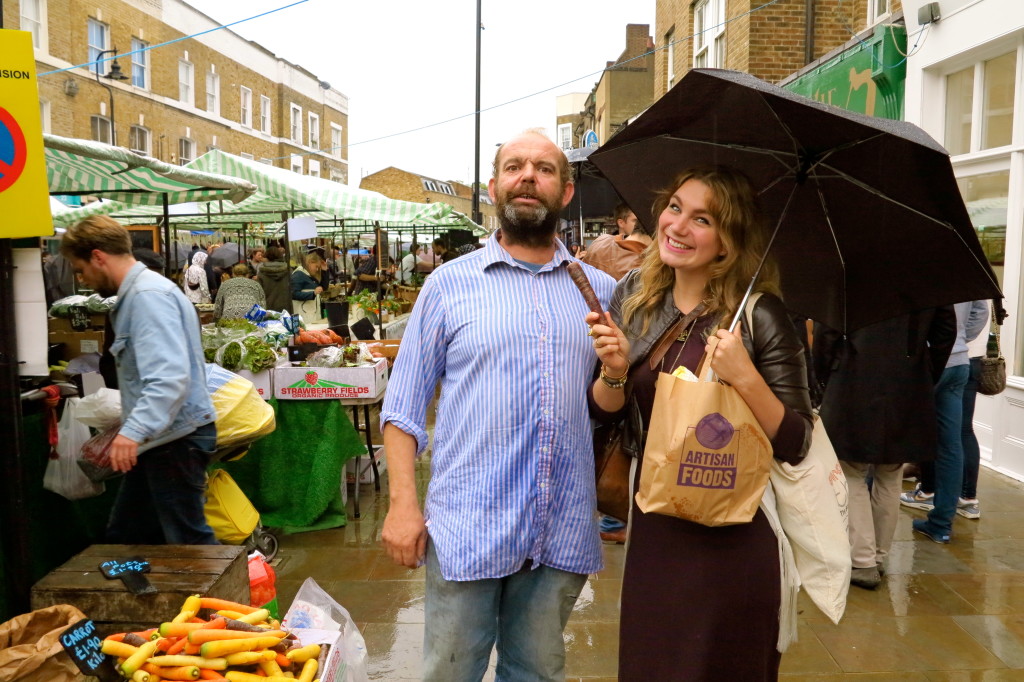 After I bought my vegetables from this stall, the man insisted I have a purple carrot because it matched my dress 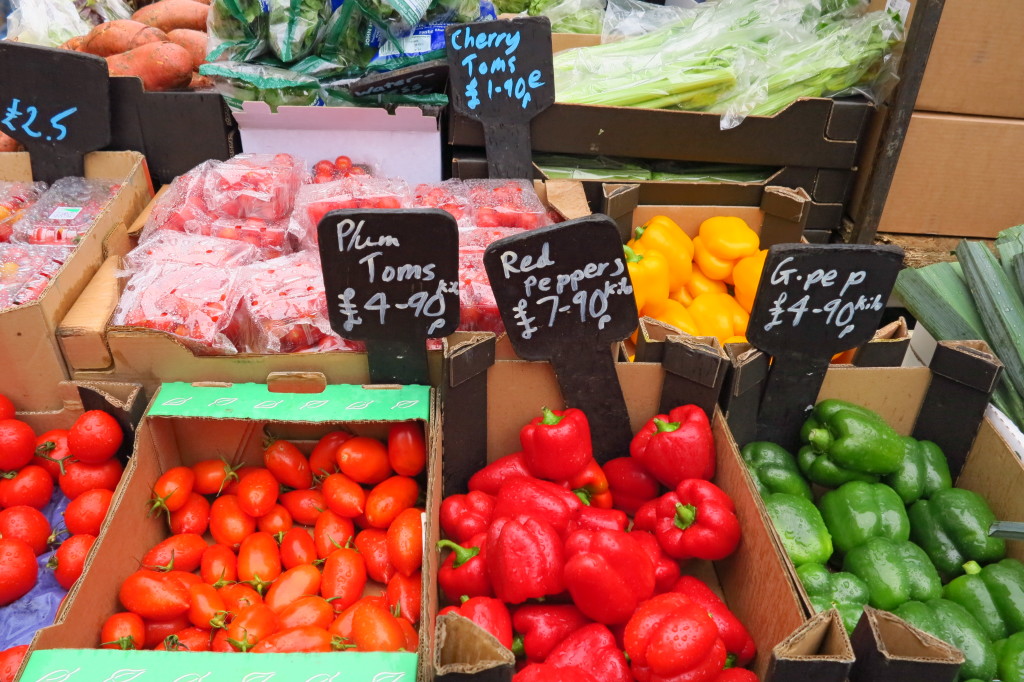 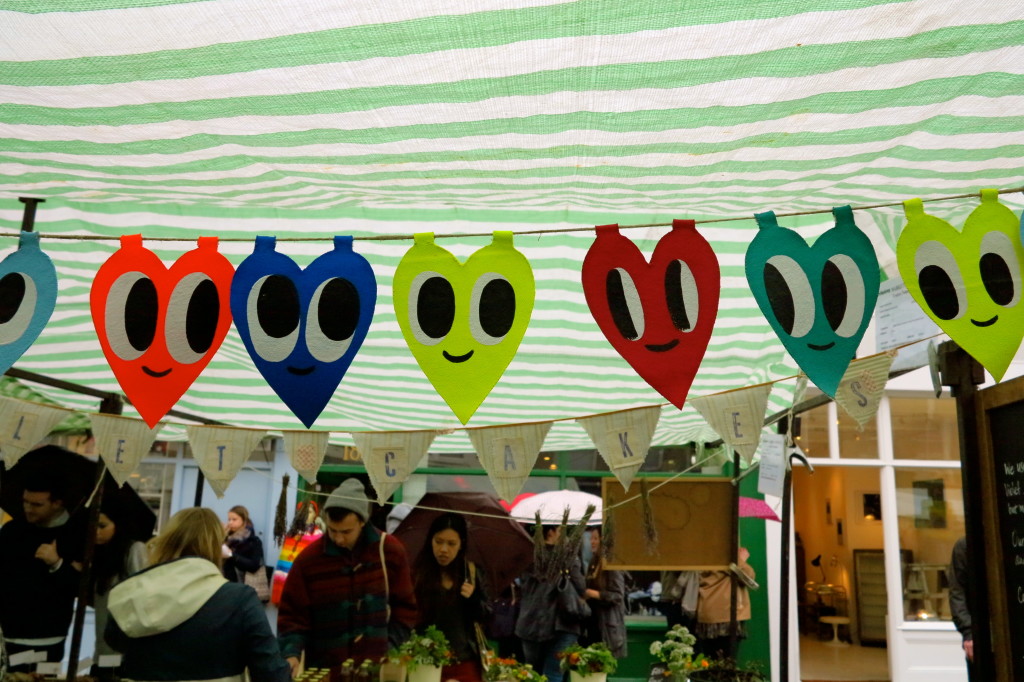 Details: The closest tube stop is Bethnal Green, though you can also easily get here from either Hoxton or Haggerston on the Overground. The market is generally open from 9-5, come rain or shine. If you plan on shopping, bring cash and some shopping bags (stalls do have bags, but it’s always good to bring your own, saving the planet and all that). 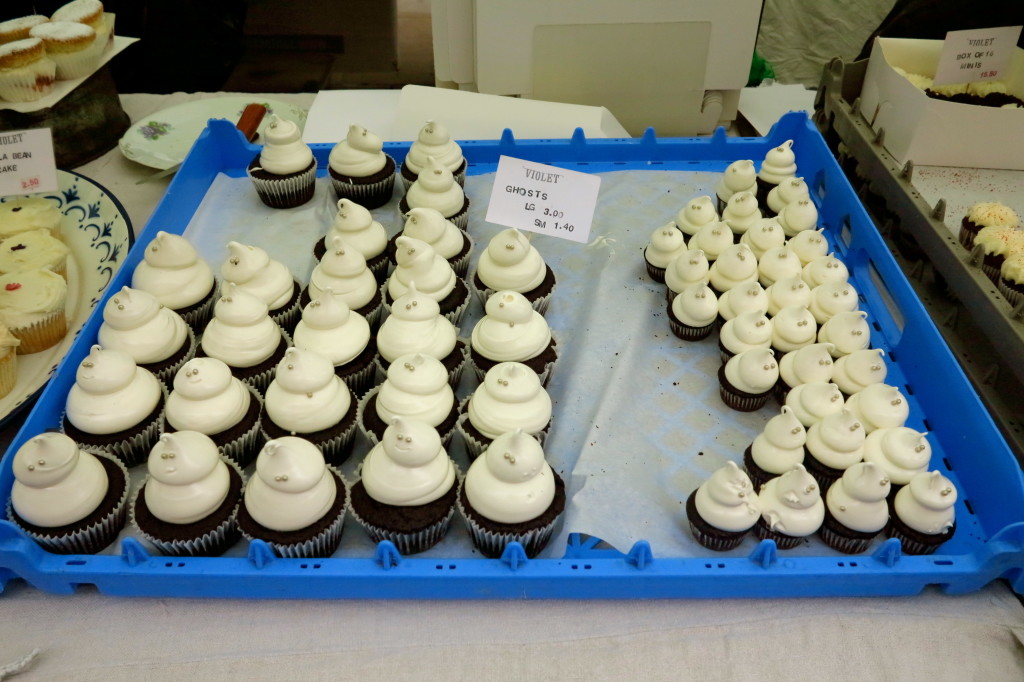 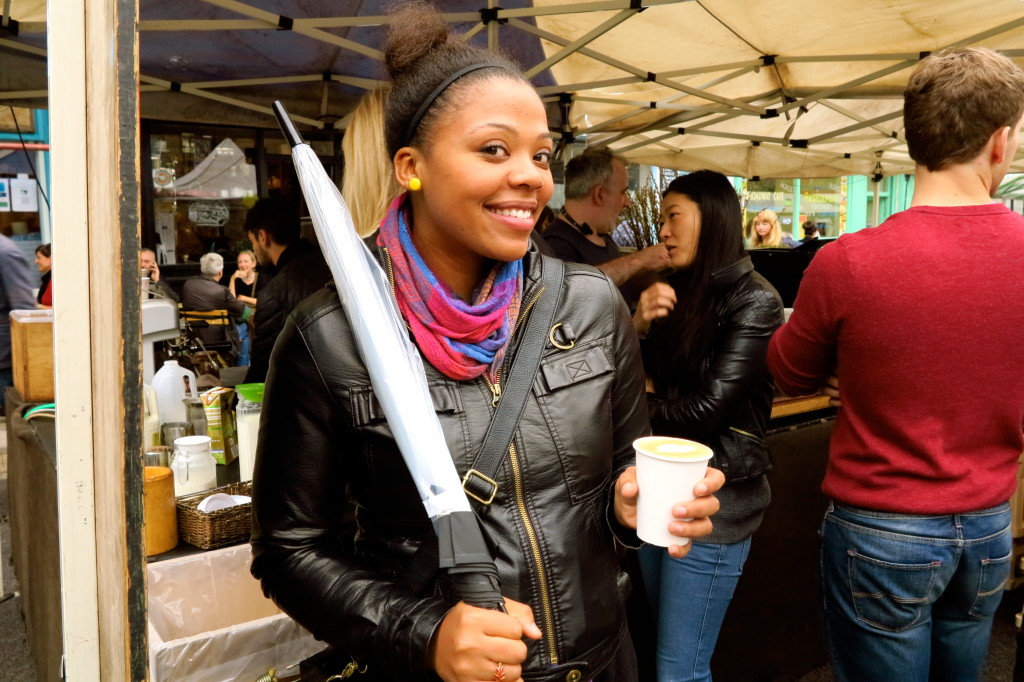 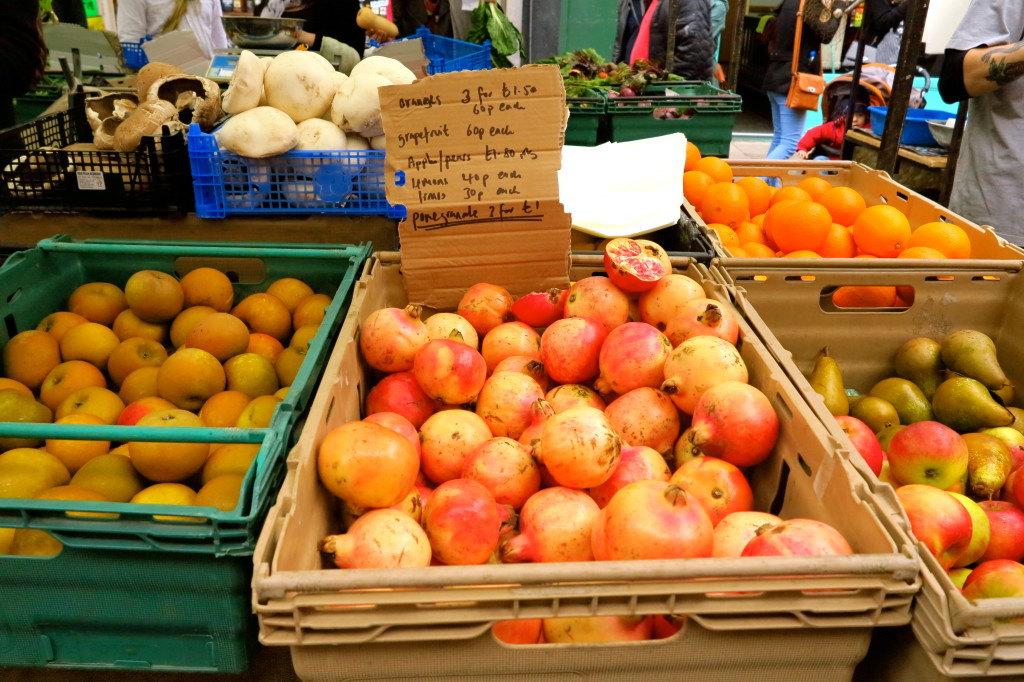 Have you ever been to Broadway Market? If yes, did you enjoy it? If no, would you like to go?

Searching For Authenticity in Sapa

Navigating Home: A Story From Japan

Around The World: Puppies (And Us)

Why You Should Buy Souvenirs (and why you...

Great post and great idea for a series – I look forward to seeing what else you write about! I too live in East London and the various markets were actually one of the big drawcards for me when I decided I’d like to live here.

Oh nice! Isn’t this area the best? Thanks a lot for your comment – I’ll try to post as much as I can about London.

London has been on my to-visit list for a long time now – so I’m really looking forward to hearing more about the city! I especially love hearing about markets!

Yes, I’m sure you’d absolutely love it! London is a fantastic city.

I can’t wait to go there with you!

I can’t wait for that, either!

Loving your London posts. Regretfully I never visited this market in all the years I lived in London – it looks great though. I stuck to Roman Road market when I lived in East London or Borough Market which was near my office. Occasionally I visited Portobello, Spitalfields and Greenwich markets too; they’re all brilliant. Love the fact that you’re holding an umbrella in that pic too – typical London drizzle!

All the more reason for you to come back for a visit, right? I also love Borough Market; I was just there two weeks ago. Spitalfields is quite good, too, and I went to Greenwich market for the first time in April and loved it! I still haven’t been to Portobello since I moved here, I really must go. I remember going about a decade ago, so I think it’s time I made new memories.

I’m trying to prepare myself for the endless winter drizzle…

I’ve been there!! Obviously. haha

Great post! You forgot to mention the salads with flowers in them – I ate it when I got home. It was…interesting. Definitely more of a trend sort of thing – if only flowers tasted as good as they look!

Can’t wait to go there again!

Yes, we’ll have to go back together! I had totally forgotten that you bought that flower salad…

[…] that I’m a huge fan of the East End of London – it’s where I live, so I’m naturally quite loyal to the area. Once in a while (OK, quite often, really) I venture beyond Hackney borough and see what else […]

[…] “Why don’t you try the new pay-as-you-go cafe in Shoreditch?” Isabel asked. After doing a bit of research, I set out this afternoon to find it. And, wouldn’t you know it, I’ve walked past it a hundred times; I live no more than a 15 minute walk away. Once again, this Best of London post features my beloved East London. […]

[…] good friend Brenna talked about her beloved Broadway Market – which admittedly is quite great. Of course, Brick Lane (I accidentally typed ‘Brick […]

[…] On weekends I stock up on lots of local fruit, vegetables, eggs, bread, and cheese from either Broadway Market or Borough Market, so I make a big breakfast to eat while I’m checking emails and social […]

[…] Café: This one is also very near me, found on Broadway Market. As I go to Broadway Market every Saturday, I usually get my coffee and breakfast from the market itself; on other days, however, I go to the […]

[…] End, and about one of my favourite ideas for a café (in East London’s Shoreditch) and about Broadway Market (in the East London borough of Hackney). And while I did write about London Cru and the Saatchi […]

[…] going to Morning Glory next week,” he told me over smoothies on Broadway Market in East London. Something flashed in my brain; I must have read about it somewhere […]

[…] have had an extremely busy summer. Today, at Broadway Market, the wind blew and the three of us […]

[…] Petersburg, print from Berlin (it was a good haul), mask from Zambia, photo from Peru, violin from Broadway Market here in London, painting from […]

[…] never been to the Big Smoke before. While people want to find out about lesser-known places like Broadway Market and the Early Morning Rave, let’s face it: London has some of the greatest sightseeing spots […]

[…] met and the friends that I’ve made. And I still stand by every word of that post. From Broadway Market to Saatchi Gallery, to afternoon tea and early morning raves, I’m still very much in […]

Broadway is my favourite market I’ve come across in London, and I love living a 5 minute walk from it 🙂 I’ve yet to take any pictures of it though so I enjoyed seeing yours! x