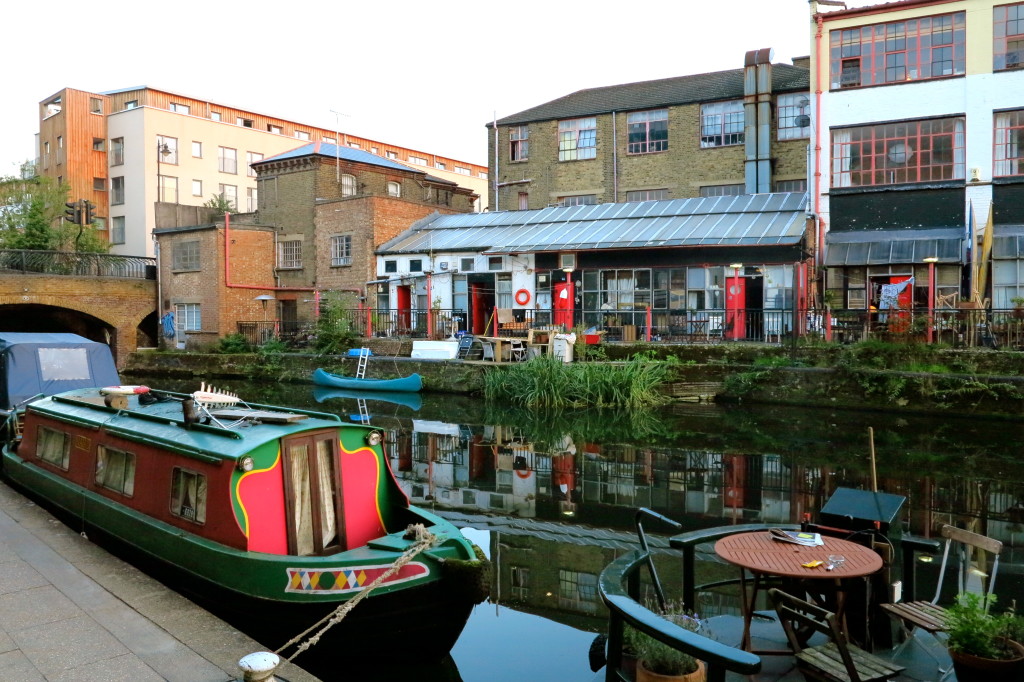 There, standing on the bridge that would take me to my flat, is a young man, his arms outstretched in wanting embrace, his face delighted at the sight of me. Looking at him you would think we were old friends, new lovers, that we had shared laughs or drinks or at least a handshake.

I have never seen him before in my life.

He is drunk. He is trying to remain collected, trying to remain unthreatening, though his very actions, his reaching for me and stumbling toward me, are belying his goal. There is something about his face that makes me stop, despite knowing I shouldn’t, despite knowing that home is just around the corner. I need home, I need to sleep after an exhausting trip to Dublin and a long day of classes. There are very few people left walking up and down Regent’s Canal, and I don’t want to be standing out here with this stranger, but I let him speak.

“I seem to be a bit lost,” he says, his eyes roving this way and that.

“We all get a little bit lost sometimes.” Now is not the time to get philosophical, but I have just come from the pub where talks of travel and glasses of whiskey have done their deed. “Where do you need to go?”

At my reply he stops, peers at me. As if he is the first man to ever have such an epiphany: I am speaking to a foreigner.

“Where are you from?”

What a strange question, that. It should be easy by now, I should have an answer memorized, but for anyone who has ever spent time travelling, or left her hometown, or simply didn’t fit into that place that was once so easy to fit into, the answer is a daunting one. It is the question I am asked more than my name. It is the first thing people say to me, in hostel common rooms and in smoky little bars and in overpriced taxi cabs and even now, right now, standing outside my flat. Even outside my home, I am questioned, I am needed to be compartmentalized.

I am guilty of it, too; it is an icebreaker, an easy way to make conversation. I learned long ago to never assume that I know the answer, no matter the accent, though that’s perhaps the byproduct of years of erroneously being called an American.

John, as I now know him to be called, is still mumbling to me about finding a London “more east than this,” about searching for Brick Lane bagels and pubs that might still be open for a pint. My bag is heavy, my feet hurt, but I’m genuinely trying to help him, gently urging him as far away from the street as I can while still herding him in the right direction. He keeps forgetting my name, but he’s charming in that floppy-haired English kind of way. Blue eyes, plaid shirt. In another life, a few hours ago, we might have met in different circumstances, and I would have thought that he was cute.

He asks me again.

“Where are you from?”

And a few hours ago, if we had met over a drink and we had discovered we had a little bit in common, if I had felt that he was the kind of man who might want to know, I would have told him.

Where am I from? I was born in Winnipeg, though I left 11 years ago. I went to university in Halifax, and lived in Toronto for a short while. But then I made the road my home, and travelled for years, and lived in parts of the world I didn’t even know existed until I arrived. I found homes in Russia, in Scotland, in Japan, in a backpack. I collected cultures, religions, languages, foods, faces. I remained staunchly patriotic, though part of me still got a little rush when someone told me my accent is hard to place. I took faith in all of those things you see on welcome mats: home is where the heart is, home is what you make it, where we love is home. To say I am simply from Canada doesn’t quite seem to fit, because sometimes my heart is in another place. Sometimes I feel like I’m from everywhere, and nowhere.

With one more explanation of where he needs to go, John makes his way into the night, in search of bagels and adventure. And I, I unlock my front door.

The Bracelet From Varanasi

When I Grow Up

What a gorgeous piece of writing!!

Thank you so much, Oneika!

Gorgeous. You are a woman without a country, a true citizen of the world – and that is quite the achievement!

Thank you, Alyssa. You are such a great support for me, especially here in London!

I always say I’m from Harrogate (or Leeds, to a non-Brit) at first, but then quantify it…”but I lived in South Korea for almost 4 years…and Newcastle for 4 or 5 years before that.” And now home doesn’t feel like home so much, when I’m back in Harrogate. I know how you feel, and this is a beautiful piece of writing.

Also makes me wonder if John was more handsome than Mr. Shirtless Bartender in The Viaduct. Swoon.

Thank you so much, Tom. I’m so glad that you can relate – sometimes I feel like I’m going crazy!

And if we’re comparing men, I would say John was more the boyfriend type (you know, despite being drunk and wandering aimlessly through the streets) and Mr. Shirtless Bartender was more the, um…one night type. So, despite the very real possibility that John ended up in the canal last night, I would choose him.

Tom re-introduced me to your site and I’m such a fan especially of that last paragraph…I always say I’m American to clarify off the bat (otherwise the immediate assumption is that I’m from Asia) but add a “but I haven’t been back in a long time, I’ve been living in Asia and Europe for the last five years”. Though recently I’ve taken to just not caring as much and just saying, “I’m from Paris” (I was there for the last year and a half and had a carte de sejour) and enjoying the confused looks, much like your “I’m from here.” Anyway glad to have rediscovered your blog!

It seems like so many of us travellers go through this! I’m really glad that you rediscovered my blog, hopefully you’ll stick around and keep reading. Thanks very much for your comment!

Loving your London stories! One of the things I love about London is that people from all over the world make it their home, even though they weren’t born there. I only lived in London for about four years before I left the UK but I proudly tell everyone I meet on the road that it’s my home. Please write me a post about the Southbank or Greenwich, oh and bonfire night too!

Thanks, Amy! I will try to write a lot more London stories. I love that international aspect of the city, too – it’s rare to meet someone who was actually born here.

As a study abroad study right now, I can really appreciate this situation.

Lovely story, as always. I just started reading your blog this summer and have never been more inspired to travel.

That said, I’m in Ecuador now for a bit so any tips/suggestions etc. for things to do/eat/etc? Also, any tips for planning an Inka Trail trip?

Thank you Kali! I’m glad that you are enjoying my blog. If you’d like some tips on Ecuador or Peru, please email me! thisbatteredsuitcase @ gmail.com

Lovely piece! Often times in Canada I’m asked where I’m from… & though I live in the East, I am from the West originally which is where my heart lives. But my heart also lies in Paris, so I never really know what to say. Now I’m moving to Dublin & I’m sure my heart will lie there next! x

Thank you, Audrey! I’m glad you liked it.

Sorry to have missed you in Dublin! I hope you had a good time!

Aw, yes, you too! I’m sure our paths will cross again.

[…] then something changed. And although I’ve been realising the change for the last year, as I watched London go by from the cab window yesterday it all was achingly clear: I’m not […]