Searching For Authenticity in Sapa 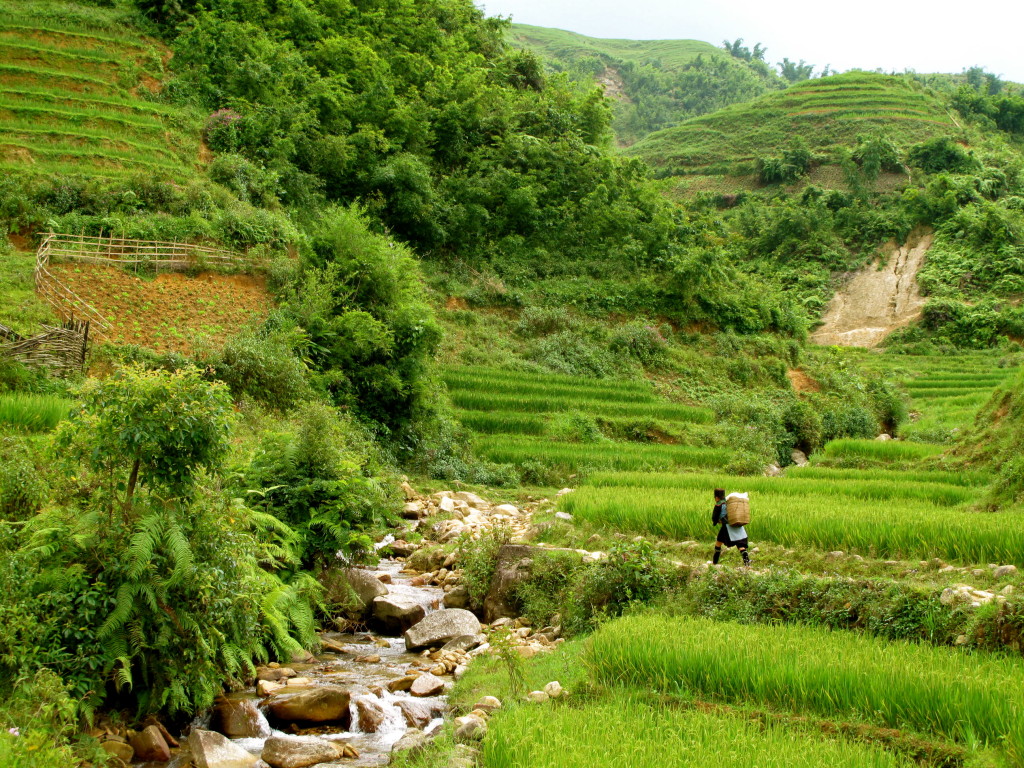 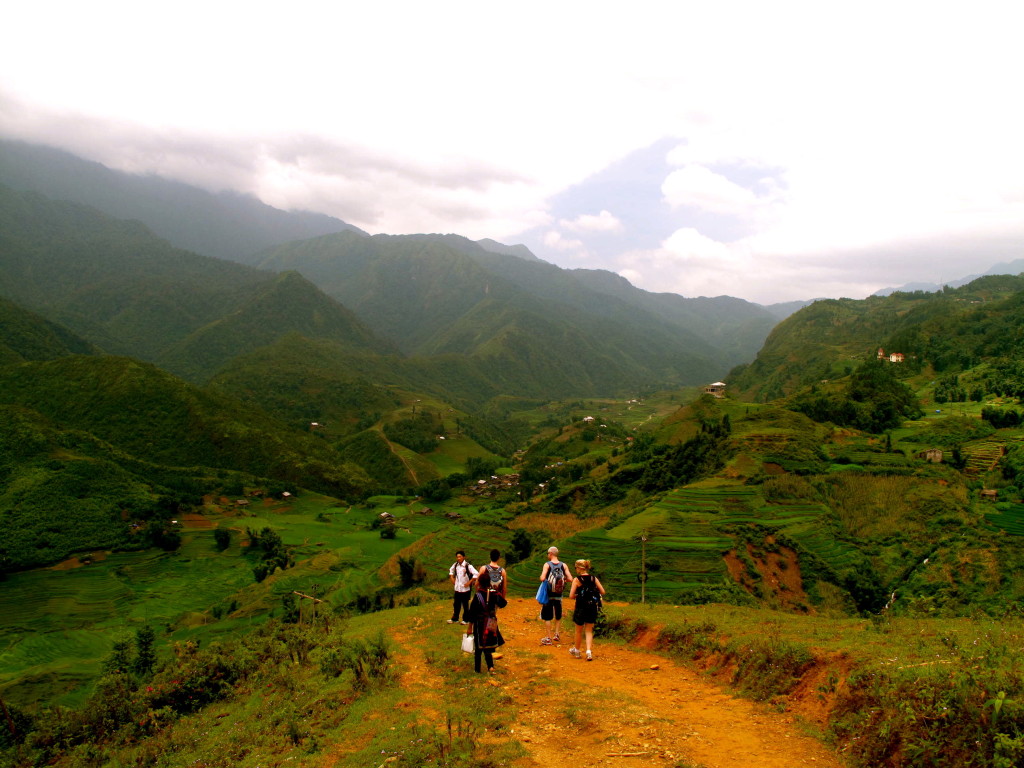 “Have another drink,” he demanded, pushing the dingy shot glass into my hands. “No hangover, I promise.”

We had trekked for one full day to get to this little house, and the table was piled with food. Empty bottles, once full of rice wine, seemed to clank to the floor every few minutes. Where we were exactly I couldn’t say – buried deep in the mountains of Northern Vietnam, we were surrounded by green paddies and a black sky.

I was on one of those three-day tours from Hanoi that guaranteed a true Hmong experience. It was my first time to Southeast Asia, and I had arrived from Japan on holiday for a few weeks. The trip was booked on a whim, a necessary break from the months teaching in classrooms, a chance for my skin to finally see the sun again. The taxi from the airport hurtled down the highway – I had never seen such chaos. Motorbikes were laden with whole families, their pigs strapped to the sides; bandana-covered faces stared at me through slats in trucks, men off to try to make a few dollars for a day’s work.

In the stifling August heat of Hanoi I found my hostel. Within hours I had made the kinds of friends we make when we’re drenched with sweat and the beer is flowing freely. “Go to Sapa,” a young Irish girl in a pink sombrero told me. “It’s beautiful there.”

A few days later, I was on the train north, the cabins filled with the other members of my tour group. We were comically typical, a ragtag bunch of backpackers seeking what we thought we could not find in Hanoi: nature, tranquility, truth. I was the cleanest of them all, the freshest to the country; the others wore their tans and their travel bracelets like trophies, odes to their months spent on the road. 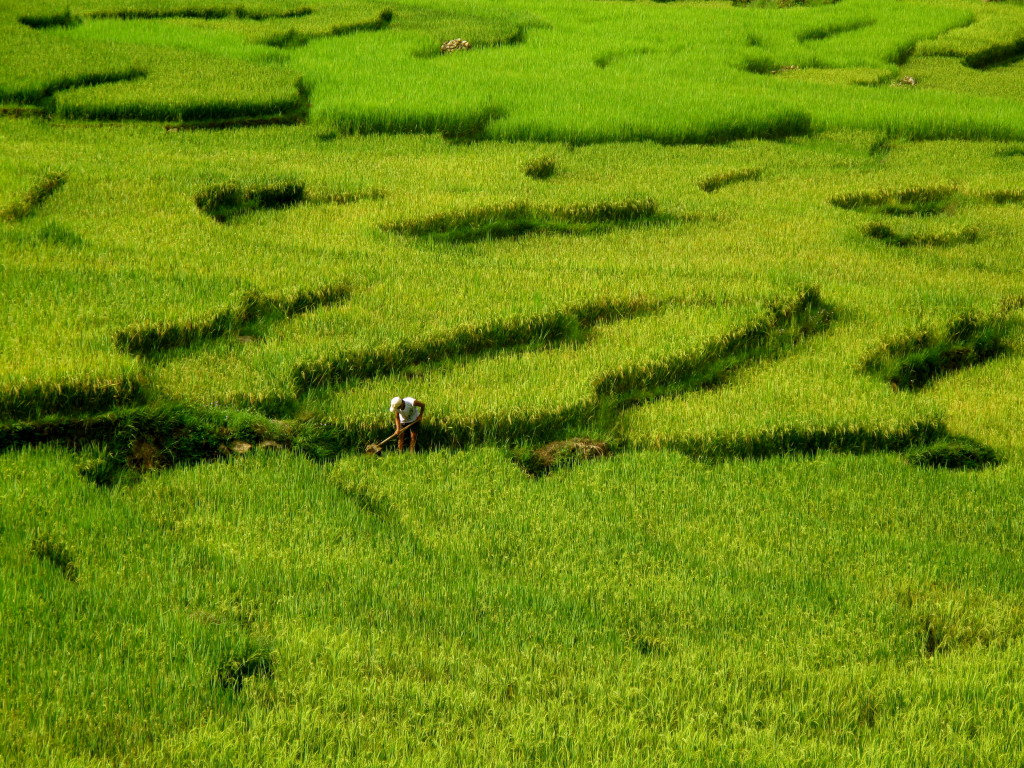 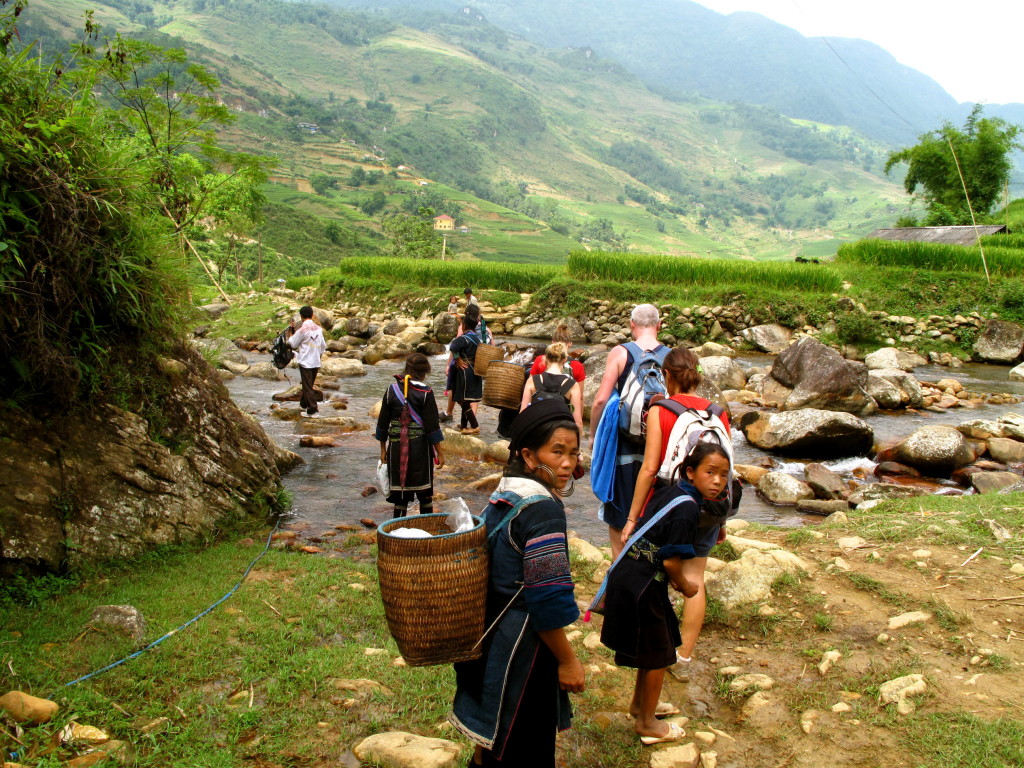 We were herded off the train, made to sit in a travel agency, given hot cups of instant coffee. We stirred our Nestle in the boiling water, the coffee stale and flat; ironic, given the country. The day was humid and the clouds hung low, but we were lucky to escape the rain as we started out into the nearby hills. It finally dawned on me why there was such a large group of Hmong women waiting outside the agency for us: they were our guides, there to navigate our steps and to hold our hands.

The hike was tough, but not impossible, even though the trails were thick with mud and the previous day’s rain had made the rocks slick and dangerous. My guide, half my size and wearing plastic sandals, gripped my hand with authority as I stumbled over paths she must have walked a thousand times. I trusted her, though she did not speak to me once. Those months in a classroom failed me now, and even my hand gestures and pathetic attempts at Vietnamese garnered only smiles.

After a solid six hours of trekking, we stopped for lunch in a village: dry baguettes and salty cheese, with oranges for dessert. Once we finished eating, the women swarmed us, opening their bags to reveal jewellery and purses, tapestries and toys. I thought that a tip was all that was expected, but the women wanted more; they wanted us to buy from them. I shoved bracelet after bracelet into my daypack, cheap gifts for friends in Japan that would turn our wrists green. My guide gave me the earrings out of her own ears. “She wants you to have them,” our main guide told me. I had nothing but a red handkerchief and some pencils to give in return, but she took them and shook my hand. 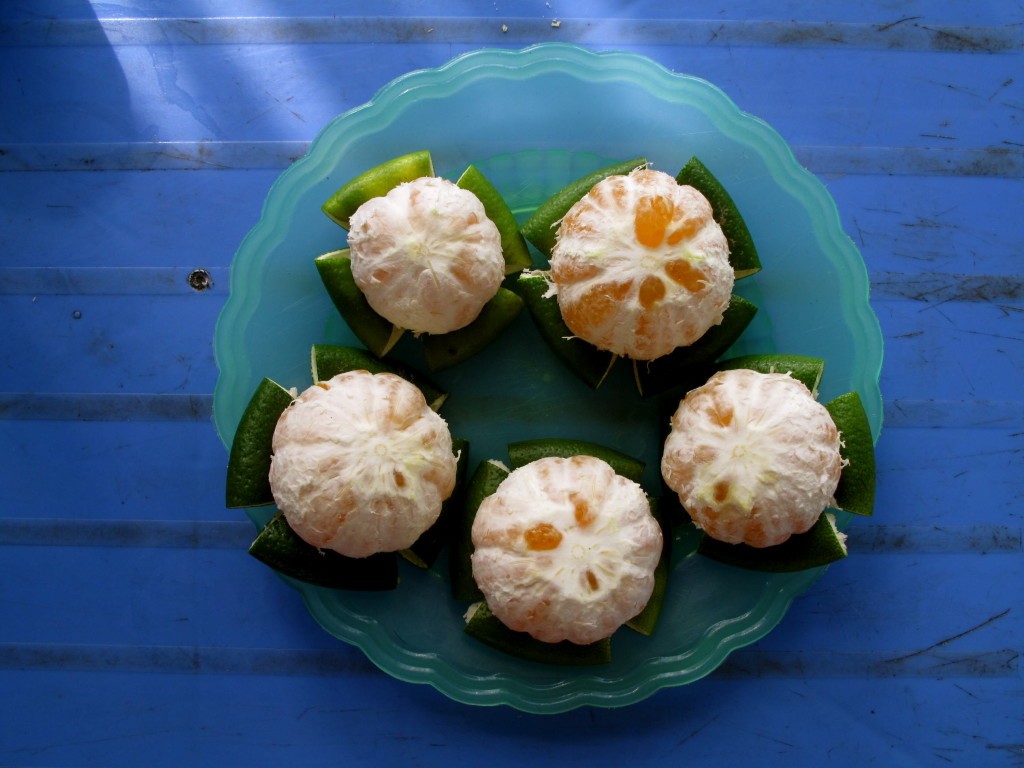 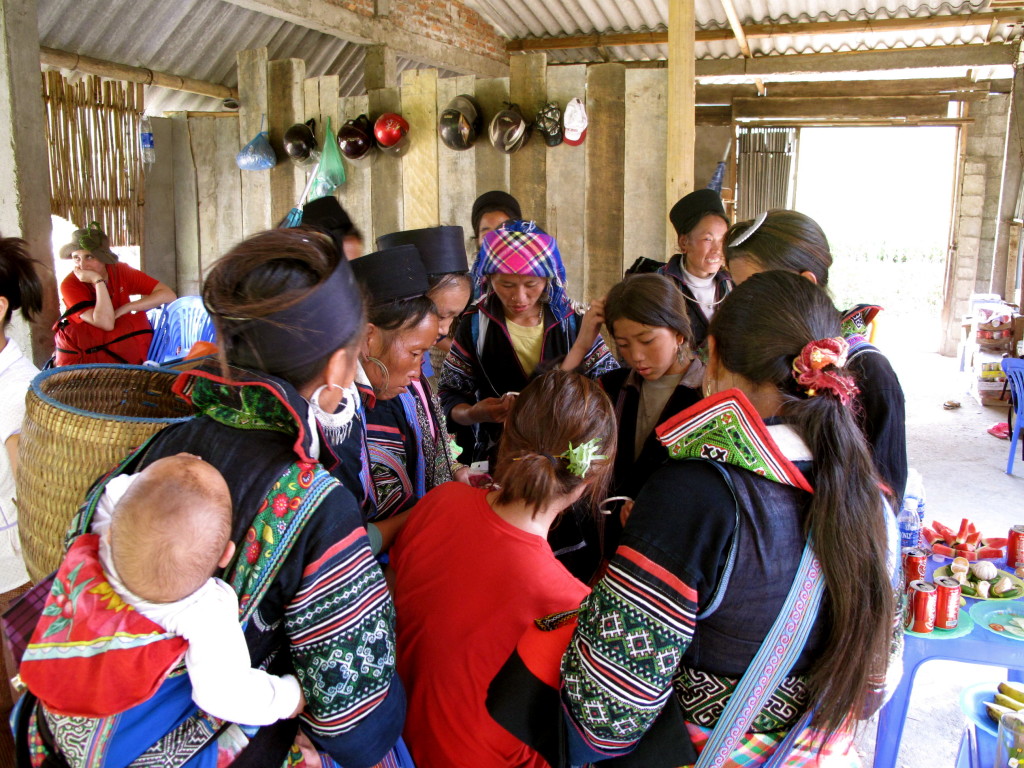 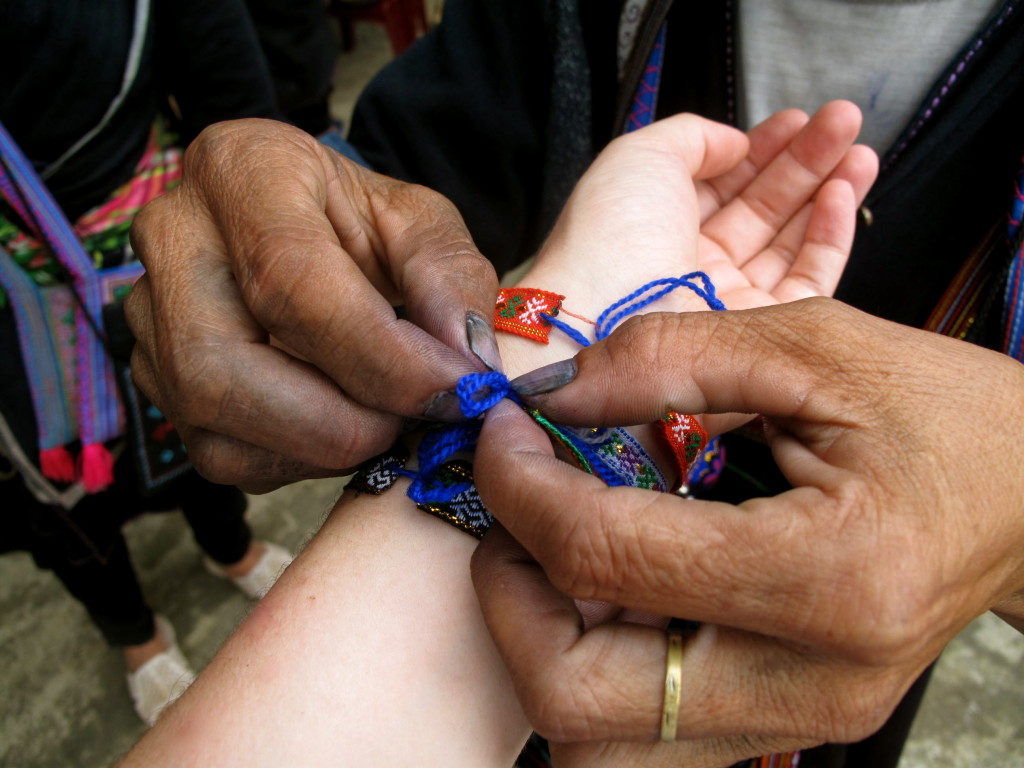 The women said goodbye, and we were left with our main guide to walk the final paths to our home-stay for the night. The heat beset the afternoon air so that we could taste it, our feet swollen, our shoes filled with mud and cow manure. We stopped once or twice more, the rocks too hot to sit on. Children with dirty faces ran up to us and stared, some of them shyly accepting our invitations to play. Games were made of sticks and grass, the ground our easel. We took photos, the kids crowding around our camera screens to see the end results.

As the sun started to set we found our final destination, a two-storied house with concrete floors and mosquito nets hanging from the ceiling. The large communal table was soon set, dinner an ongoing flow of Vietnamese dishes: noodles and soups, vegetables I could not identify. We were joined by many from the local village. The bottles of rice wine were opened, and the conversation grew louder, peppered with more and more laughter as the evening wore on. Languages flew across the room: English, Vietnamese, French, German. Even the children could feel the energy in the air, chasing a sunburnt Australian around the table while squealing with delight. 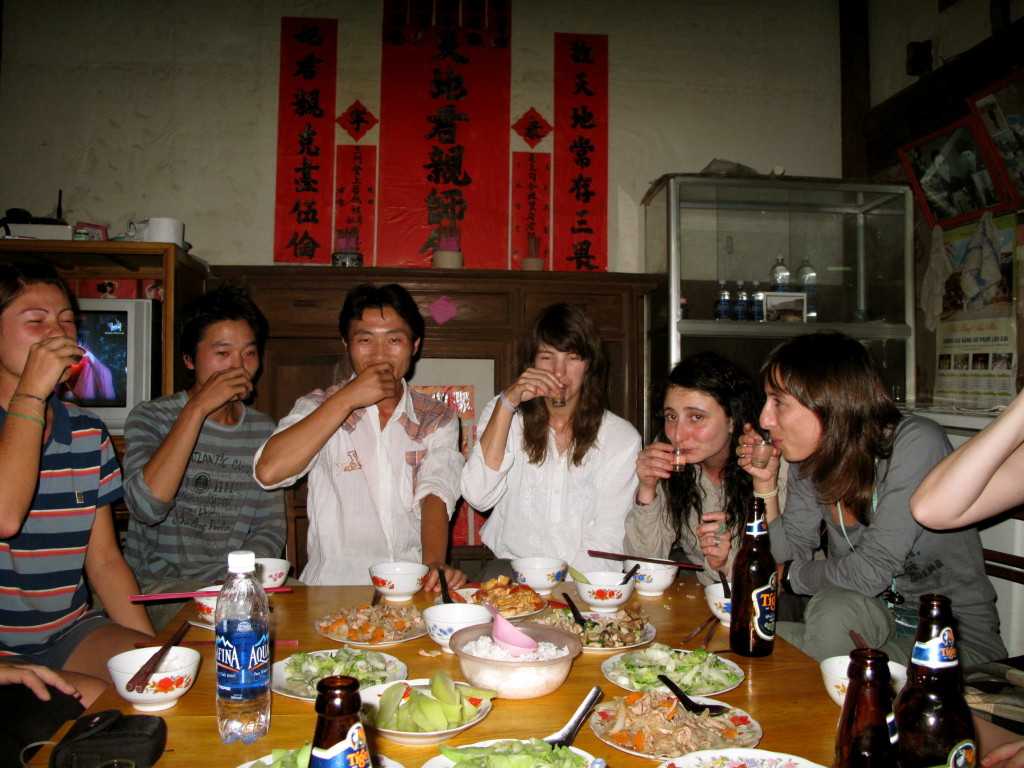 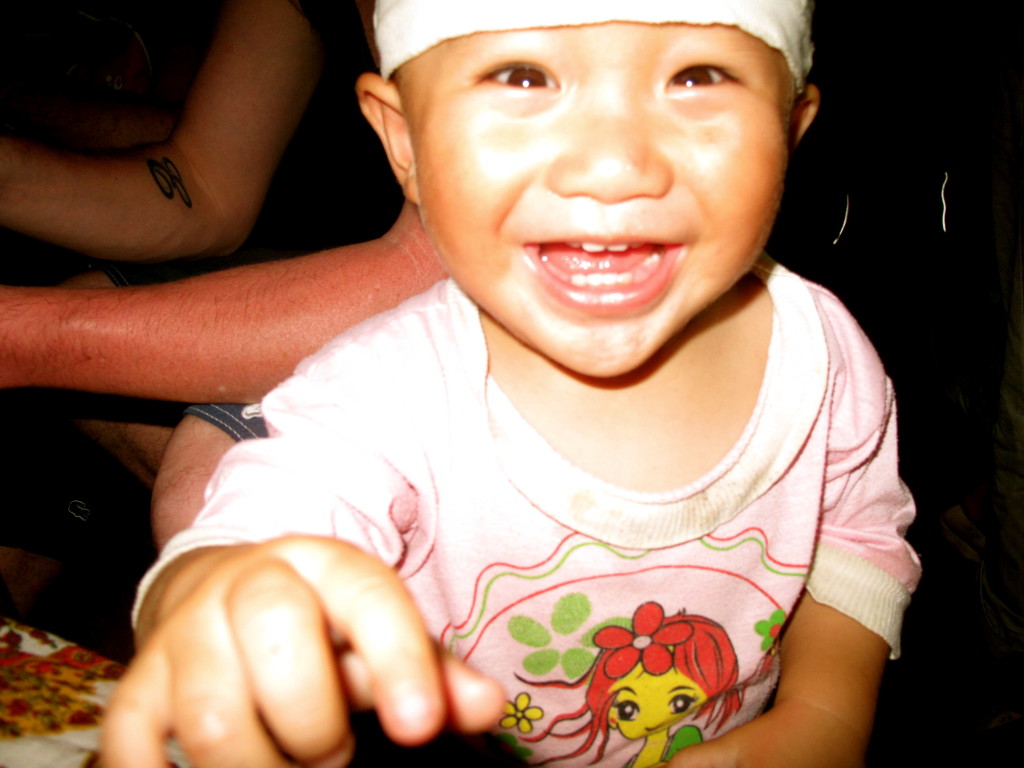 “I want a Canadian girlfriend!” one local man shouted, and the whole room laughed. “You drink good milk, and you are tall and strong.” He had turned his full attention to me now, the only Canadian. “You will come back to Sapa and be my girlfriend, yes?”

We were all drunk by this point, the fabled rice wine taking full effect. I would later collapse into bed happy and full, sleeping better than I had in recent memory. I woke to the sun streaking through the mosquito netting – my surroundings, and my mind, still, at peace. The man was right. No hangover. I thought of everything, of the hike and the children and the drinking and the laughter, and realized I’d had one of the best days of my travels thus far.

After our breakfast and our goodbyes, we started up the path again. “Wait!” my hopeful suitor cried out from the doorstep. “Will you come back?” The kids were playing in the courtyard, and somewhere in the distance I could hear a cow mooing. There was a sweet smell in the air, a mix of sunshine and thatched roofs and that green, all that green around us.

I called back to him, but I don’t know if he heard what I said. He just smiled and waved, then went back into the little house, ready to greet the next batch of tourists. 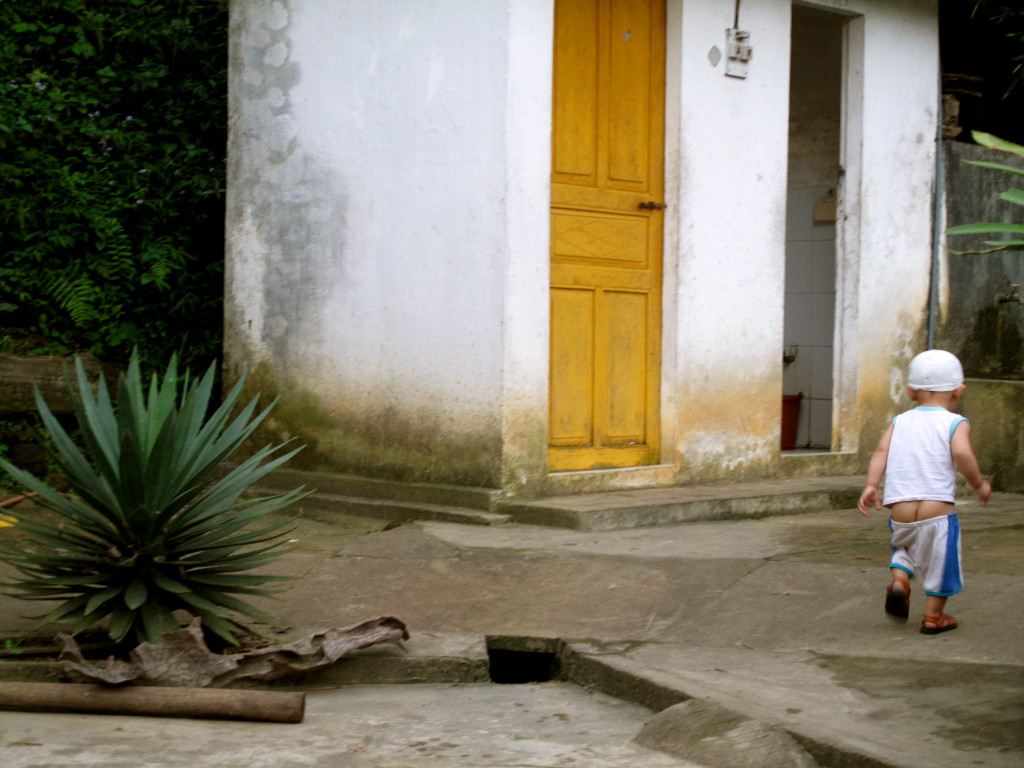 For more photos of that day (specifically of the people I encountered), please click here, here, and here.

If you are interested in doing the tour yourself, I recommend trekking with Hanoi Backpackers. Many other companies run similar tours from Hanoi; as always, do your research and know what you’re getting yourself into. Hanoi famously has lots of fake tour companies!

Around the World: Flowers

How To Make Friends In Nepal

My Life In Antigua

Why Travelling Makes Us Happy

The Best Things to Do in Gimli, Manitoba...

A Love Letter To Japan (One)

Ha – love that baby! Great piece – but you knew I thought that already 😛

Thank you, Alyssa! And thank you for your help editing – I changed a few more things and decided to just post it here. Why not, right?

Well written post with gorgeous pictures! Thanks for a nice read. 🙂
Have you ever considered doing something like that but without a travel agency? Instead, creating your own itinerary?

Yes, I have often created my own itinerary instead. As I said in the piece, this was my first time to Southeast Asia, and I was a bit inexperienced (this was 2009). Now I try to have a more active role in the tours I take… although I did really enjoy that tour through Sapa!

Well written post with gorgeous pictures! Thanks for a nice read. 🙂
Have you ever considered doing something like that but without a travel agency? Instead, creating your own itinerary?

Now this makes me REALLY want to travel to Vietnam 😉

Wow! This was a great read – you detailed the experience of Sa Pa far better than I could have.

You were in Sa Pa in a similar time frame from me – I also booked my flight on a whim from teaching in Shanghai. I wrote an article about it on my site called “THe Vietnam Diaries” and most amusingly – I think I took photos of the same villagers you have included here!

How did you feel about authenticity? I felt that the barrage of “Do You Like Shopping?” inquiries by the villagers all clad in similar outfits made it seem like a cookie-cutter designed tourist trap in the making. All in all, an amazing experience.

I nearly got rammed by a Water Buffalo while leaving the highest peak we could find.

Thanks a lot, Trevor! I’m so glad that you enjoyed the story, especially as you’ve been there, too.

What I was trying to articulate in the piece was that, despite the obvious ploy to get tourists to spend money, I still felt that I had an authentic experience. It is what you make it, I think.

I’m still on the fence about Vietnam, having heard such mixed opinions about the country and the treatment of tourists by the locals. But I suppose it’s a matter of luck (or lack of it) and, as you pointed out, of what you make of the experience.

He was so cute!

This is a great post, lots of info and the pictures are just amazing. I will take note all your ideas for my trip to Sapa next year. Thanks for sharing !!!