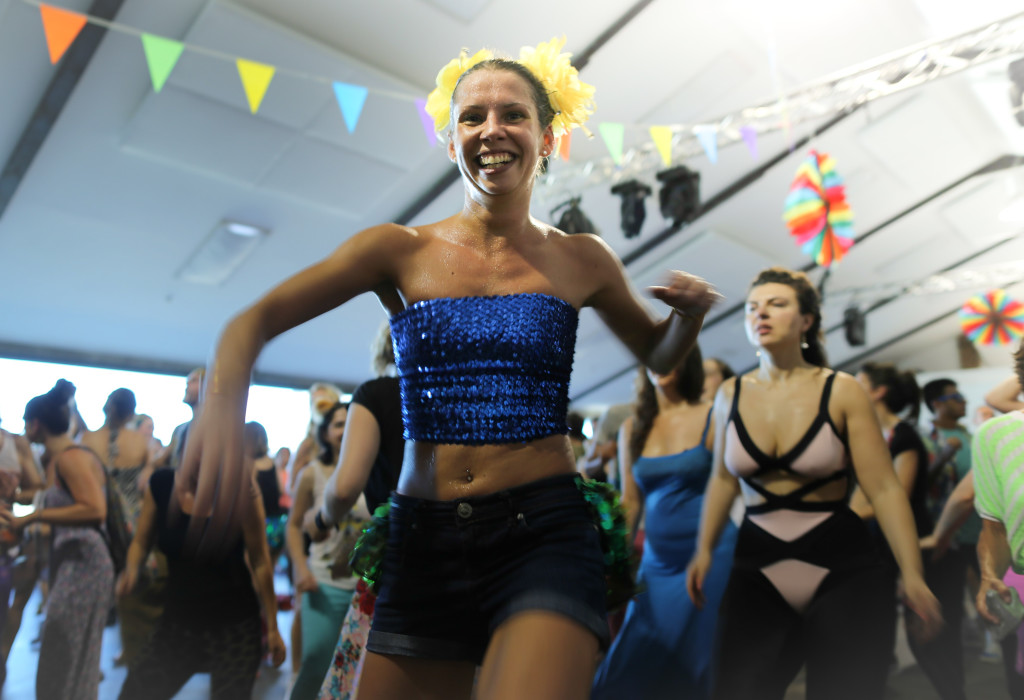 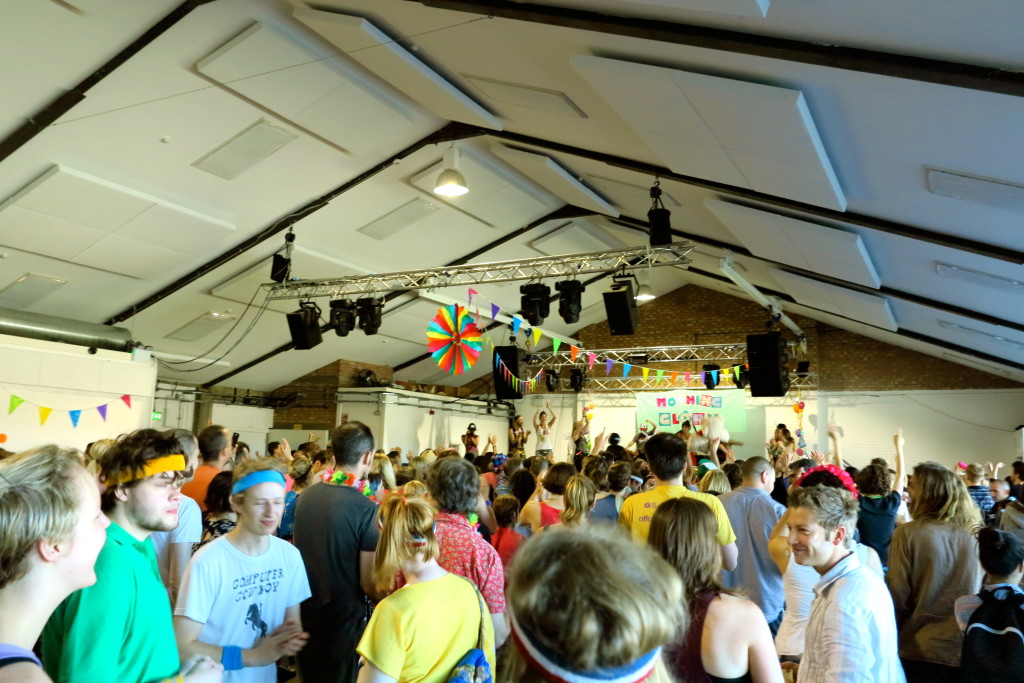 Everyone is dancing wildly, their clothes drenched in sweat. I see at least five women wearing butterfly wings; most people wear technicolour outfits, and have faces painted with glitter. A few people, like me, are in their work clothes. I take another sip of my coffee, then snap a photo on my phone for Instagram. The time reads 7:14am. This is not your ordinary rave.

I was a bit too young to really take advantage of rave culture when it hit its peak in the 90s, although I certainly dressed like I did. I went to a few under-18 raves in Winnipeg during junior high dressed in my huge JNCO jeans, platform shoes, and plastic jewellery. I wore a lot of white eyeliner, too.

By the time I was in university I had switched to a different genre of music and of dressing, one defined by a mix of riot grrrl and 60s girl groups. I hadn’t even thought of attending a rave again until my former flatmate Mike mentioned it.

“I’m going to Morning Gloryville next week,” he told me over smoothies on Broadway Market in East London. Something flashed in my brain; I must have read about it somewhere else.

“That morning rave?” I asked.

“Yeah. It’s right near your new flat, too. You should come!”

I half-joked that I would, saying that I’d get some of my old Burning Man costumes sent out for the occasion. Later that weekend, however, curiosity got the best of me, and I decided to purchase a ticket.

One Wednesday morning last month, then, I turned off the alarm at 6am. I dressed for work – I would need to go into the office for a meeting at 10:30, straight from the rave.

I met Mike outside the Oval Space in East London, close to both the Hoxton Overground and Bethnal Green stations.

“Do you want your face painted?” a girl in a top hat asked me. 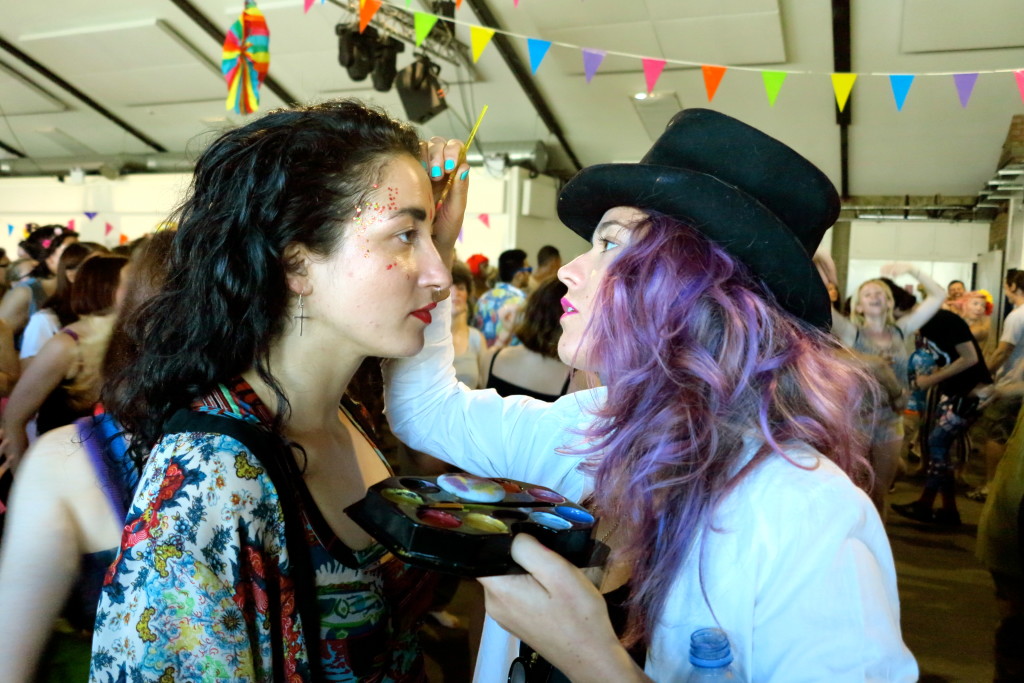 After a bit of face paint, we went inside, where the party was already in full swing. With some stands set up for purchasable smoothies and coffee, the rest of the space was a dance floor, with people of all ages dancing to the blaring music. Along one side of the dance floor were a few massage therapists and yoga instructors, but for the most part, the entire crowd was engaged in dancing as energetically as they could. And, despite the time, my work clothes, and the fact that I was completely sober save a small bit of caffeine coursing through my veins, I soon couldn’t help but start dancing myself. 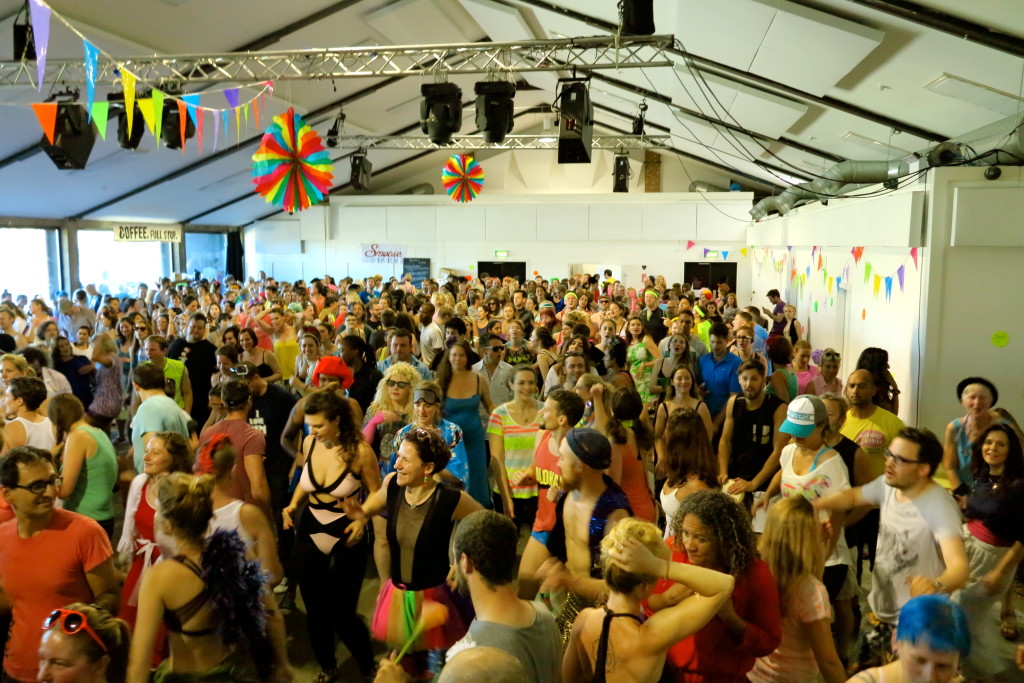 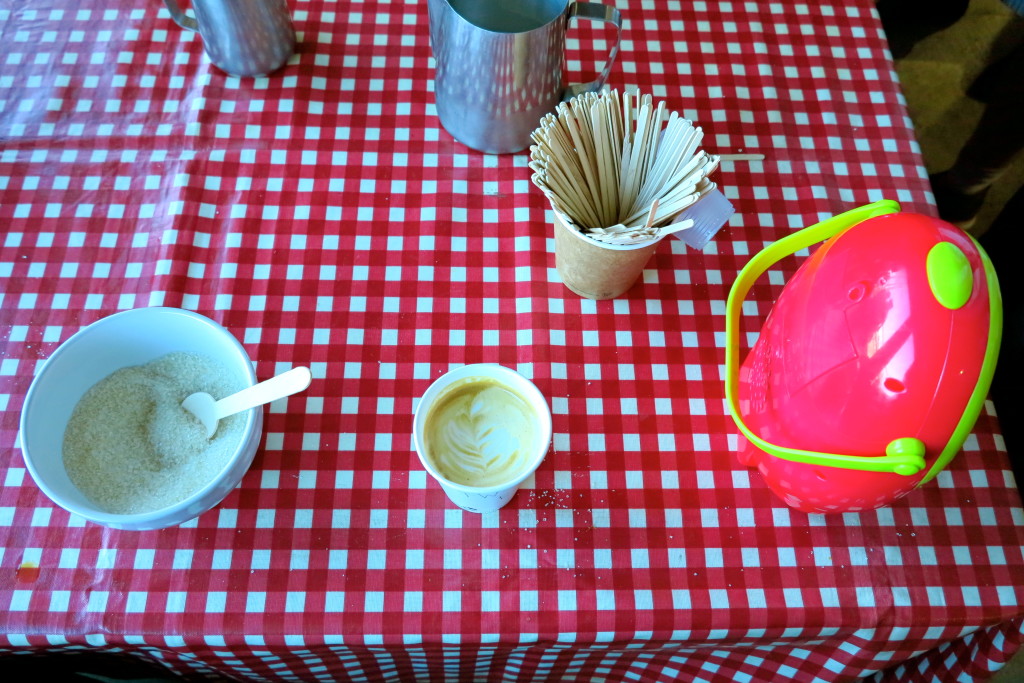 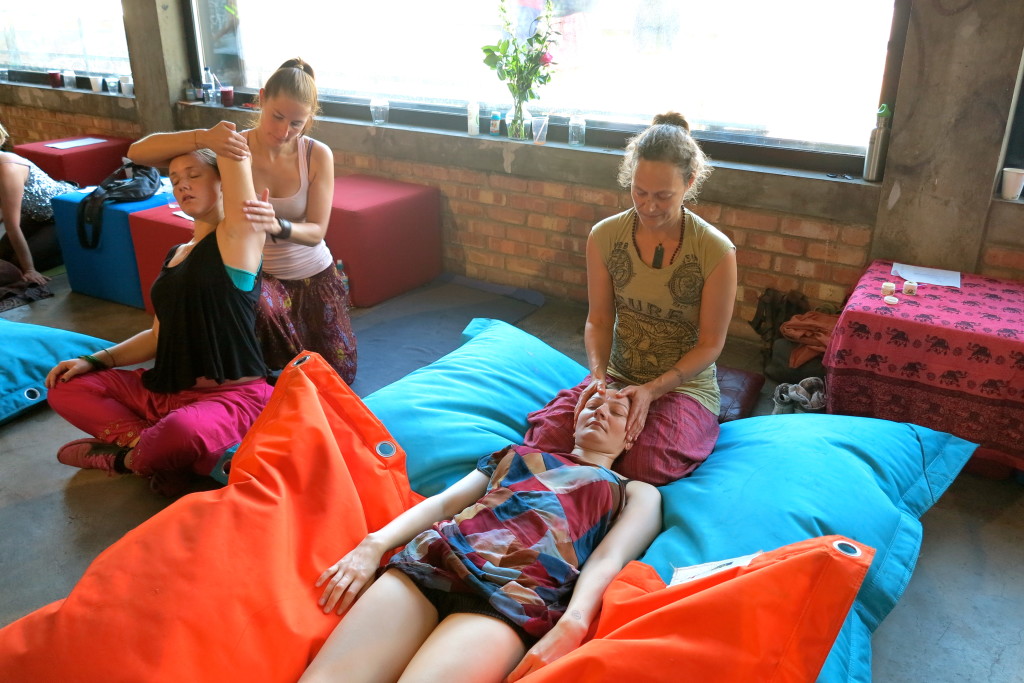 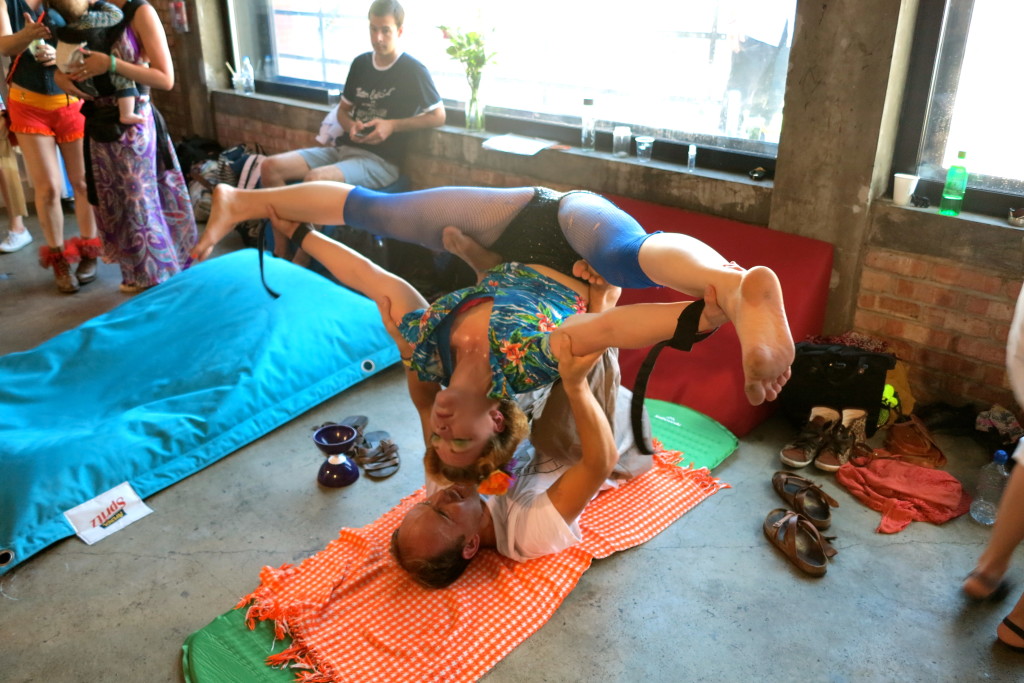 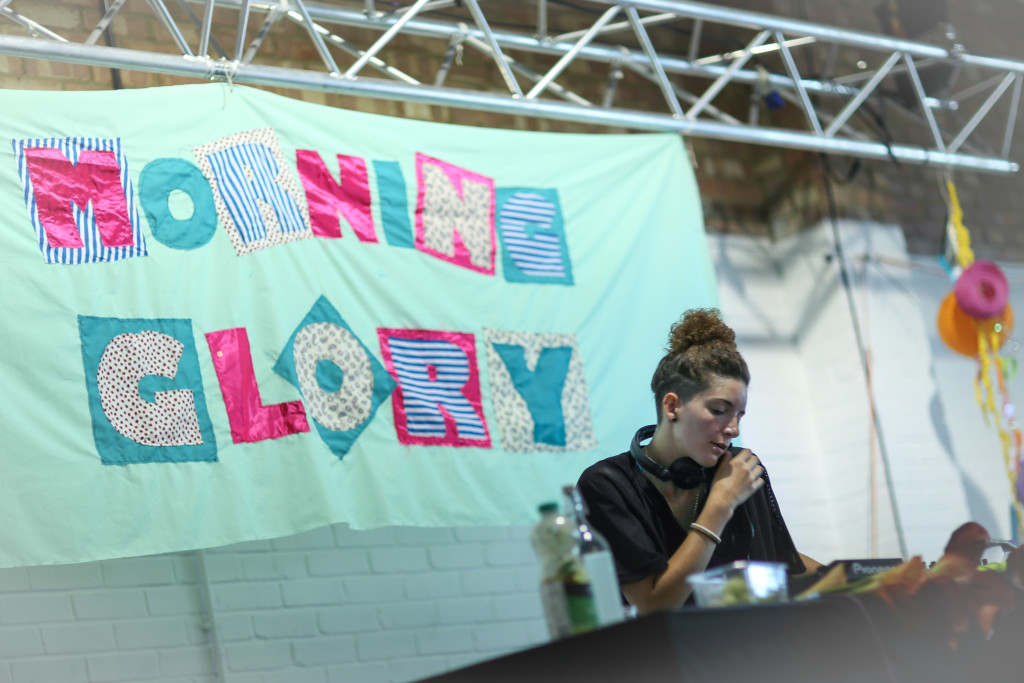 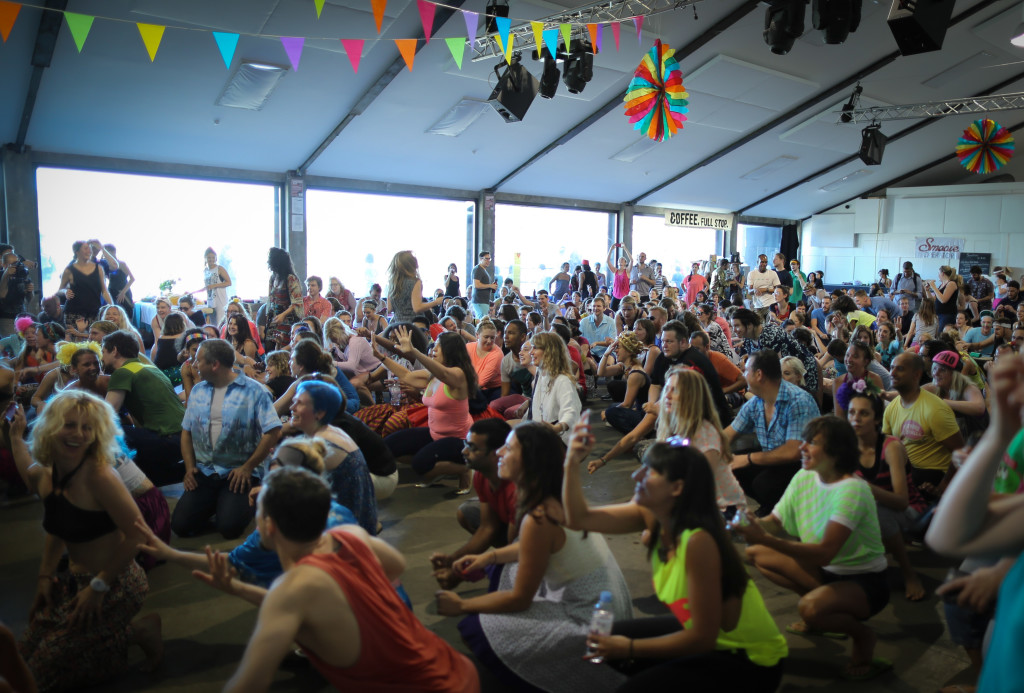 Photo by Pie Aerts (can you see me?)

It just so happens that my Dutch friend Pie was in town (I first met Pie in Colombia, and we’ve since kept in touch). He had first suggested that we meet for brunch, but I invited him to the rave instead. Thankfully, he too thought it was a cool and unique idea.

“Isn’t this amazing?” I must have said to him a thousand times. It was just so invigorating, so lively, so fun. Everyone in the room had a huge smile on his or her face, even the kids. When I left, a few hours later, I still had the biggest rush of adrenaline. 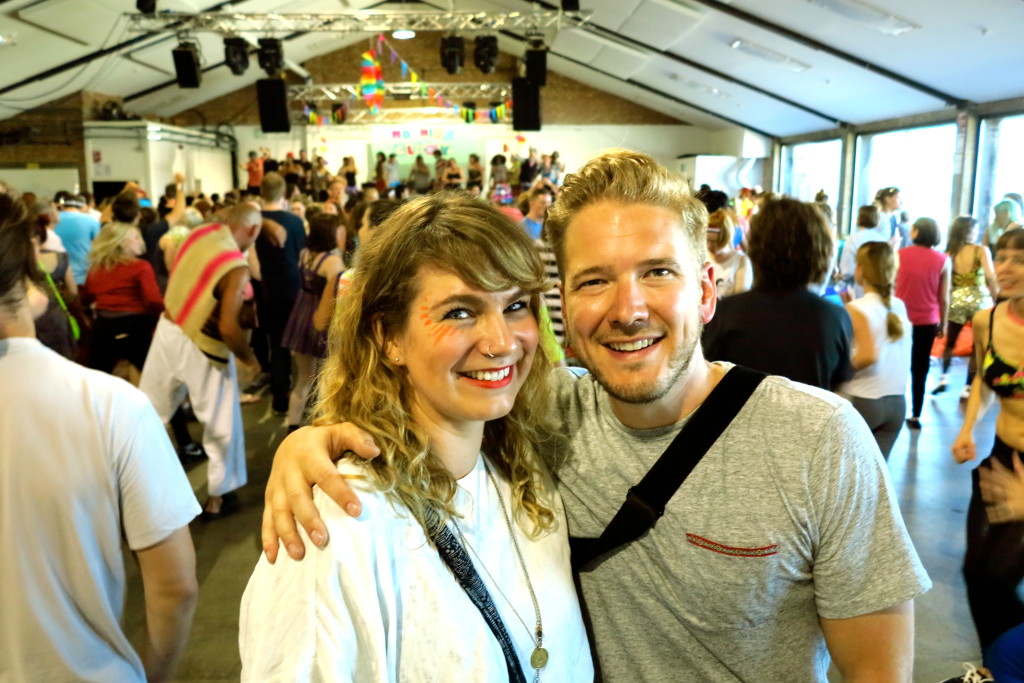 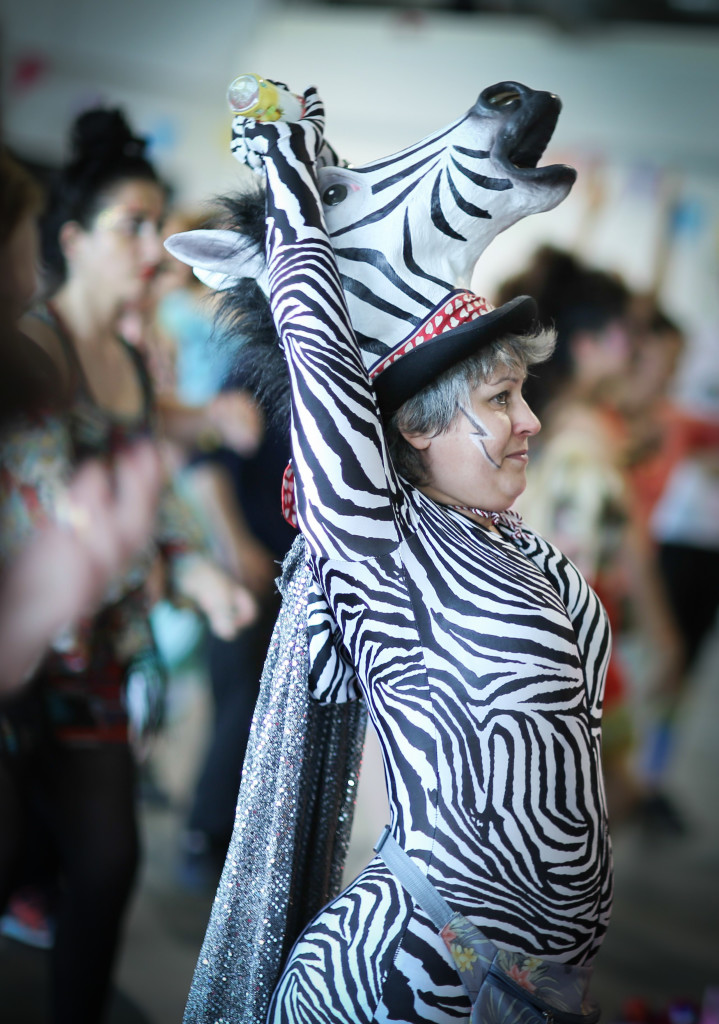 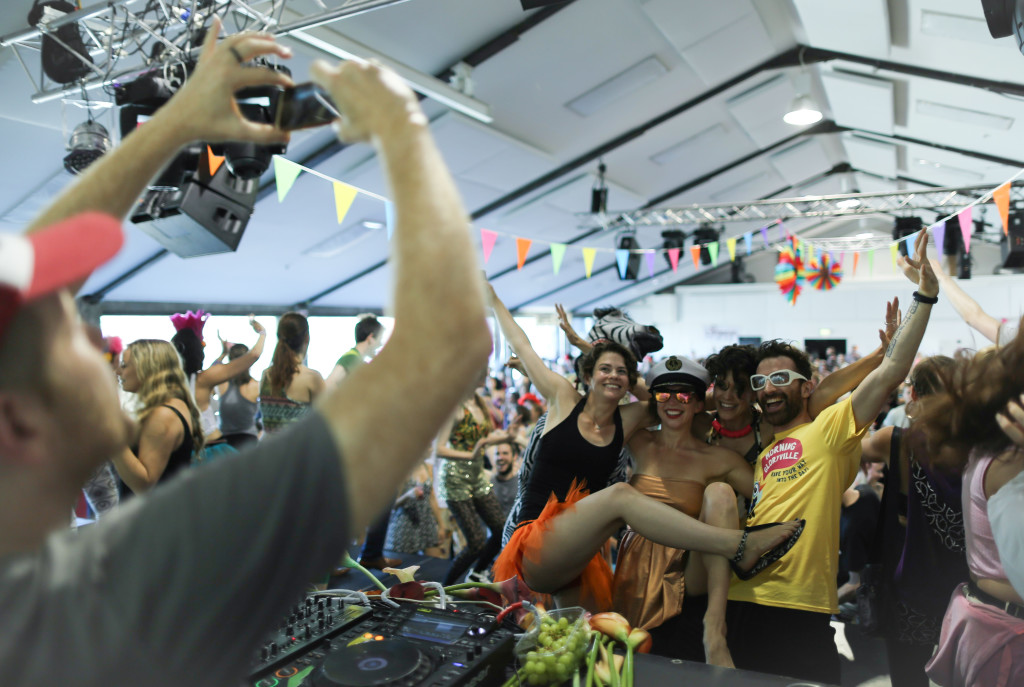 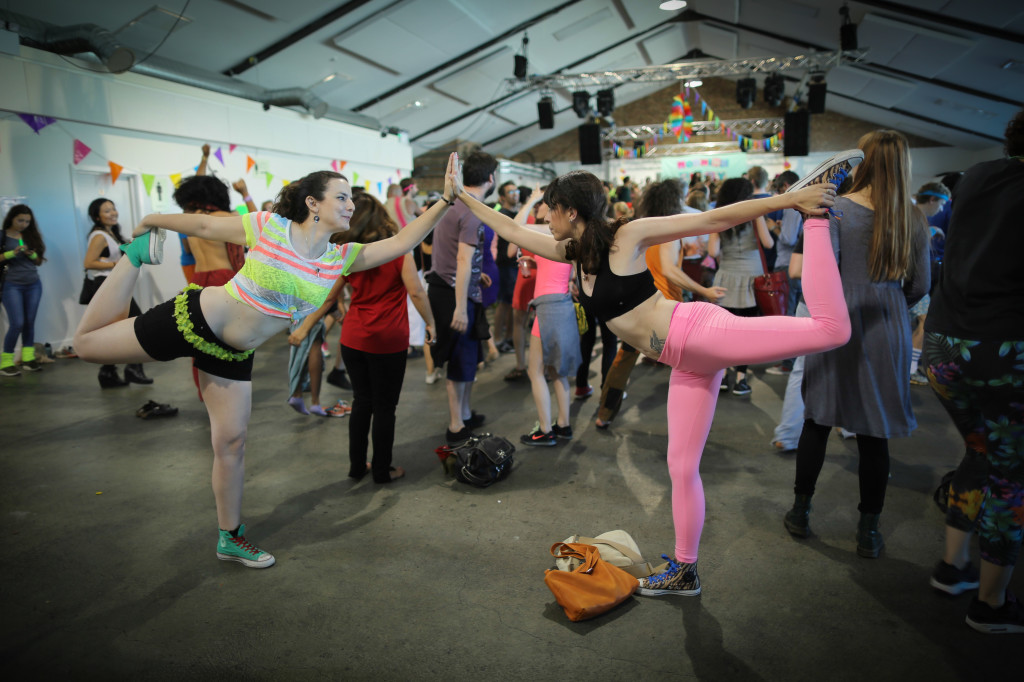 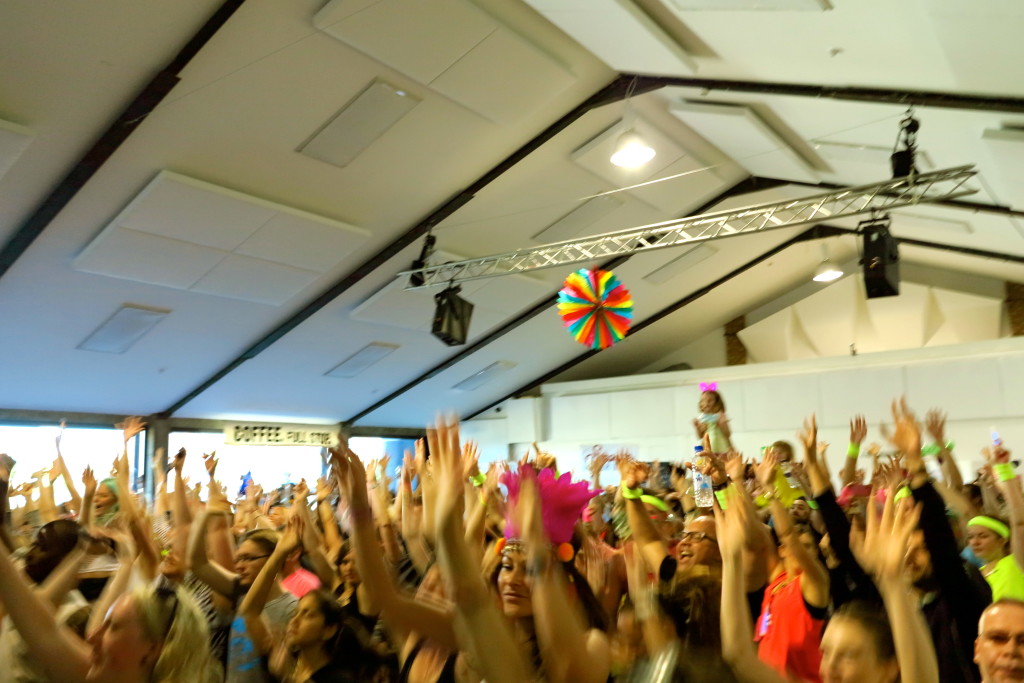 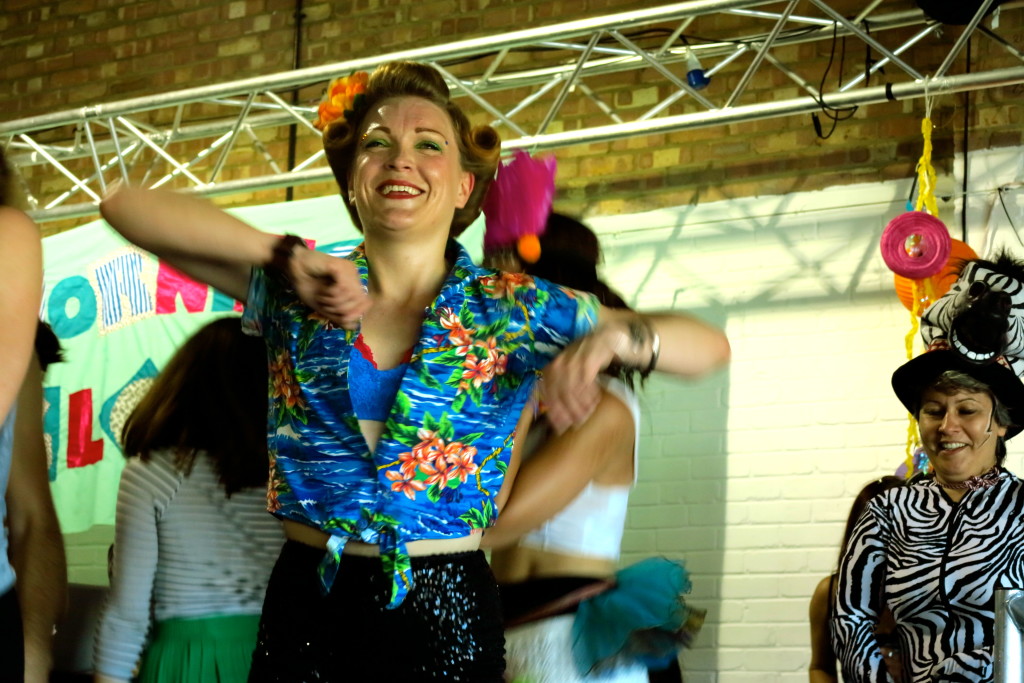 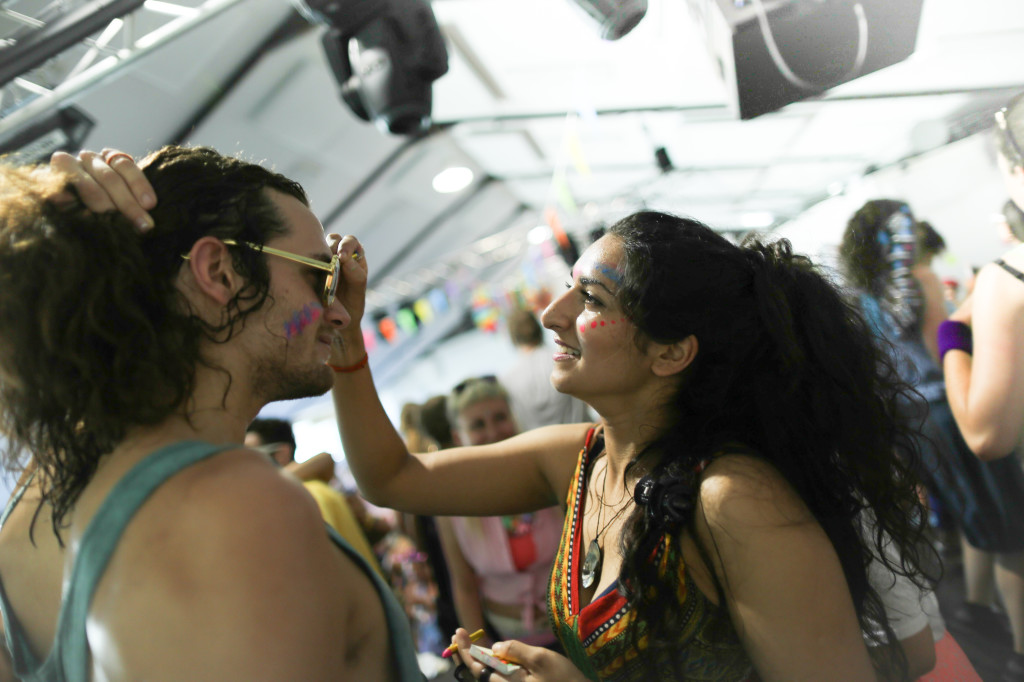 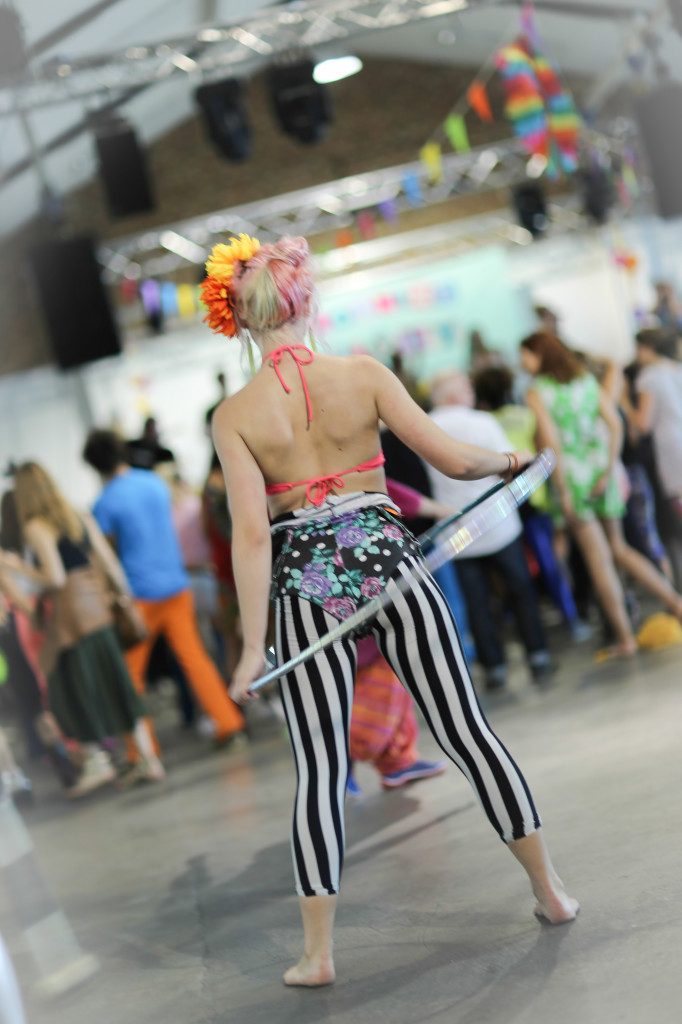 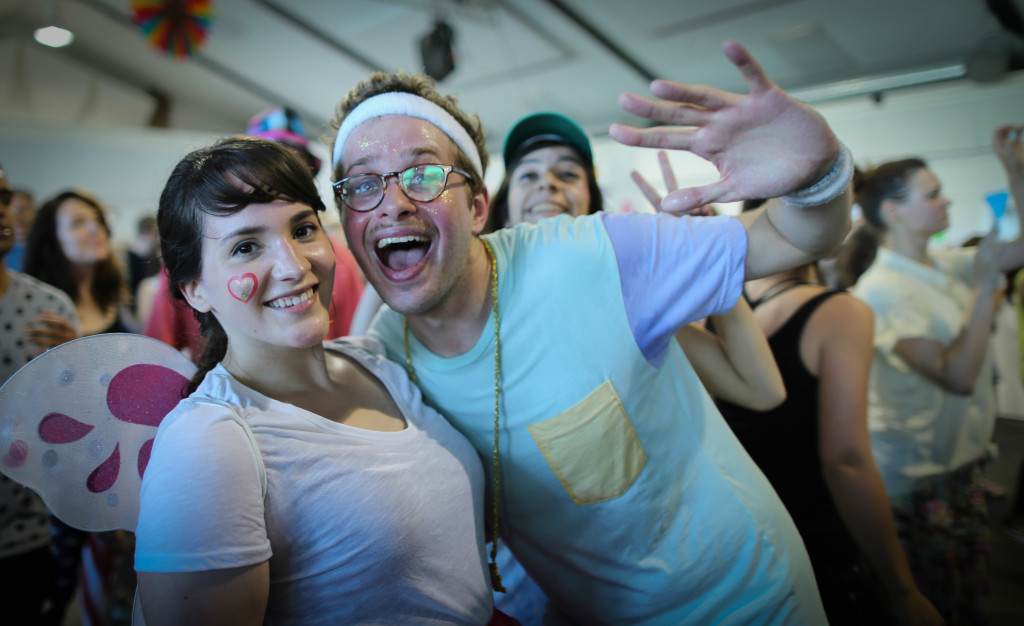 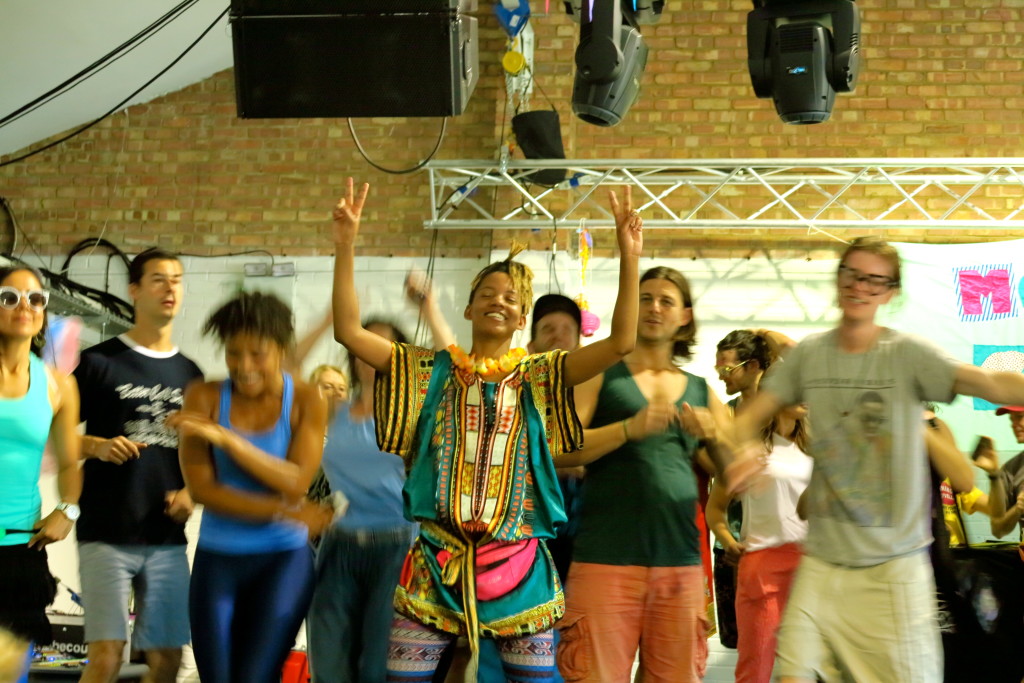 While I understand that this might not be the event for everyone, if you have an open mind and you want to try something new, I would definitely recommend checking Morning Gloryville out (there are a few locations in London). There are also regular Morning Glory raves in Brighton, Paris, Dublin, Barcelona, Amsterdam, Zurich, Tokyo, San Francisco, New York, and Sydney. Tickets can be purchased online and are also available at the door.

For more information, including where you can attend and purchasing tickets, here’s the website. 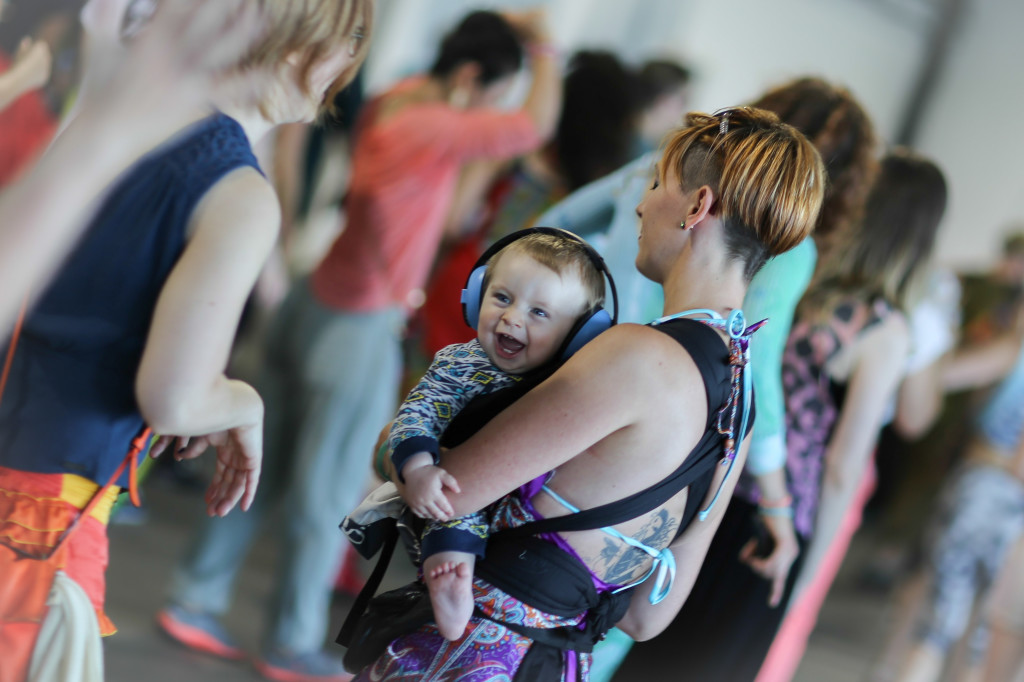 Many thanks to Pie Aerts for providing some of the photos you see here. He is an amazing photographer and a friend. Please add him on Instagram at Pie_Aerts!

Would you go to an early morning rave? Is Morning Gloryville London (or elsewhere) something that appeals to you?

Around the World: Shoes

A Night in Brazil

Is it Difficult to Get a Visa for...

Birthdays And Bicycles In Luang Prabang

One of the Morning Glory’s coincides with me being in London (for once!) so I will have to check it out! Although it would take some getting used to ie. the fact it’s in the daytime not the middle of the night but it would be a great start to the day!

You should definitely check it out! It really was a great start to the day.

this is super cool! I was really jealous that I wasn’t in London until I saw Sydney. how very awesome! I will check it out

I hope you get to attend one of them!

Everything about that rave is beautiful.

I agree! Everyone was in the best mood.

This looks like a ridiculously awesome time. I wonder if Halifax could sustain such an event!

I think the people of Halifax would be all over it! Think of all the university students…

That looks like an AMAZING time. Someone should start up an early morning rave in Toronto!

I’m surprised it hasn’t happened in Toronto yet! Morning Gloryville needs to get to Canada…

These photos are awesome! I’m bummed I missed out on these while I was living in Syney, it looks like so much fun! It’s definitely on my list to check out next time I’m back in New York!

I hope you get to attend one of them one day! And yes, Pie’s photos are brilliant.

That’s so colorful! Love it! I must visit London one day! Incredible!

I hope you get to visit soon, Nguyen!

These things have made it to NYC (of course) and I want to try to make it to the next one….although I’m not usually a morning person so I think I will need to pregame with espresso & scones.

You should definitely go! Buy espresso there 🙂

I’ve been hearing a lot about these early morning raves and although it does sound totally eccentric, it also sounds kind of great!! It’s something I think I’d be up for trying one day and imagine it must leave everyone feeling really upbeat and energised!

Totally – I’d love to go again! I felt so good for the entire day…

[…] Smoke before. While people want to find out about lesser-known places like Broadway Market and the Early Morning Rave, let’s face it: London has some of the greatest sightseeing spots in the world, from […]

[…] stand by every word of that post. From Broadway Market to Saatchi Gallery, to afternoon tea and early morning raves, I’m still very much in […]

This sounds a lot like ecstatic dance which is popular across the US. I will be moving to Paris soon, so I will have to check it out!

[…] as I wanted to. Despite checking out loads of cafés, taking tours, attending the theatre, dancing my mornings away at raves, and frequenting a lot of galleries, I have always felt that I was barely scratching the surface of […]