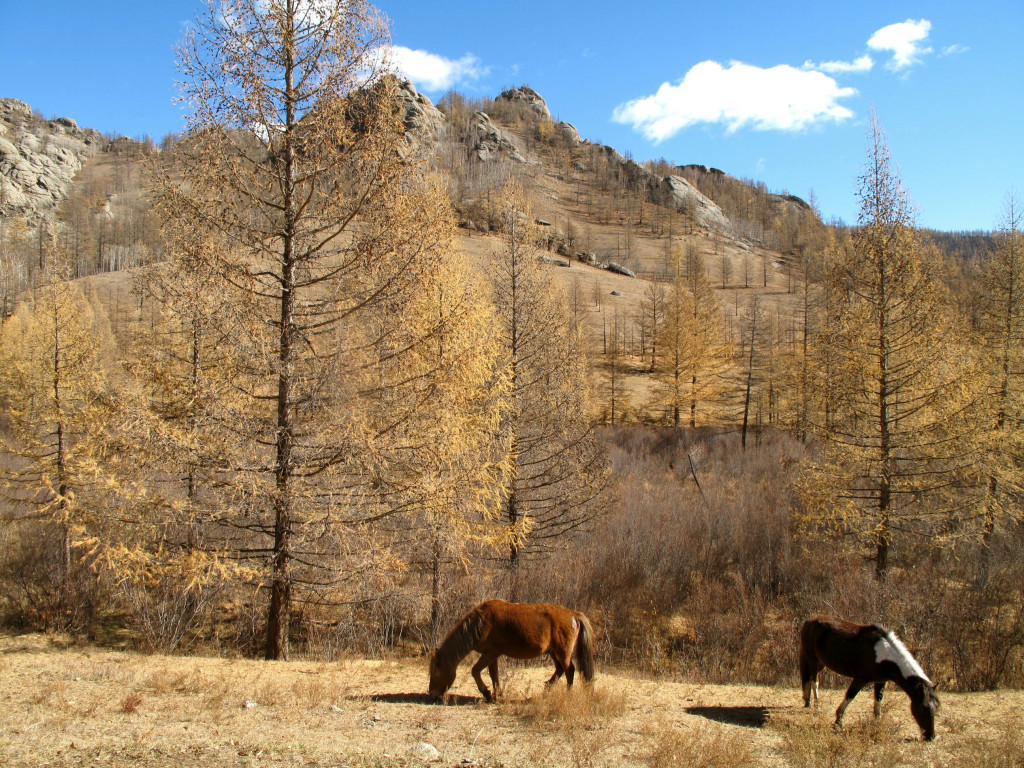 “Here is your pile of wood.” Yul, our guide, pointed to a bin of chopped wood. “The local people use dung, but it is easier for tourists to light this.” He smiled once, a flash of white.

The ger, commonly called a yurt in other parts of the world, was to be our home for the next few nights. Once Yul said his goodbyes, it would just be the two of us, my mother and I, left on our own in the wilds of Mongolia. The ger was the same size as one used for an entire Mongolian family, with three small beds, a desk, and a stove in the middle, and was built on top of a cement slab. Flooring and carpets had been laid down for comfort, but to eat or to use the toilet, we had to walk a few hundred metres to a main lodge. Although there were a few other gers scattered around, we were the only ones brave enough (or stupid enough) to be visiting in late October; frost had already covered parts of the ground, and the trees lost leaves with every gust of wind. 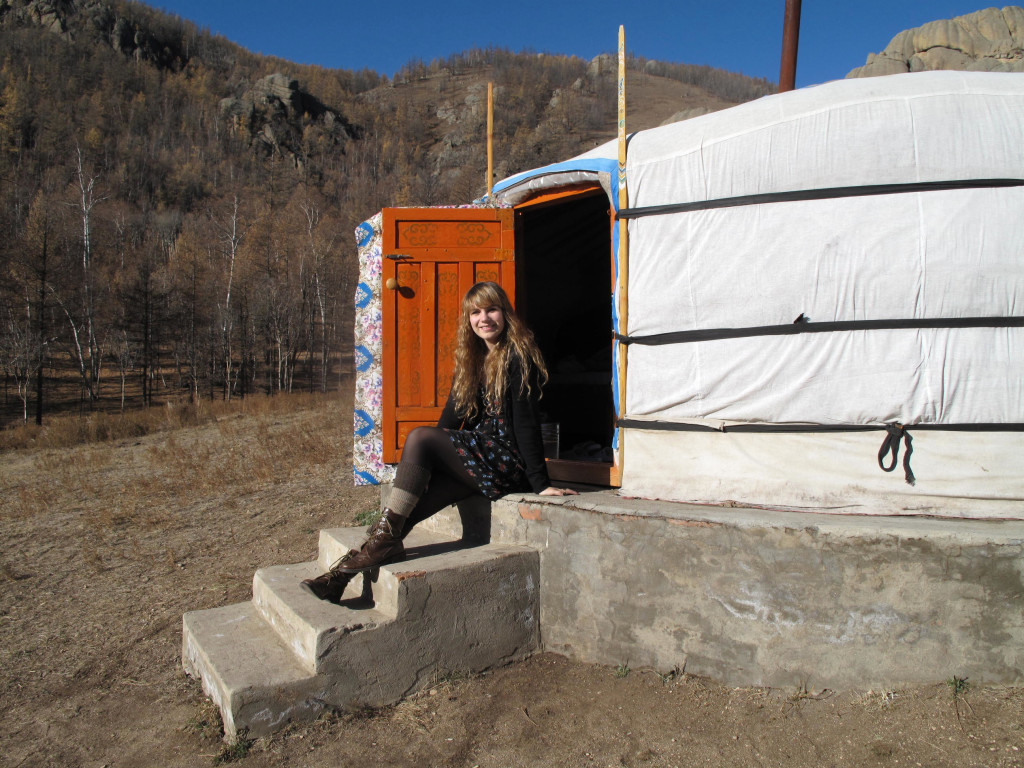 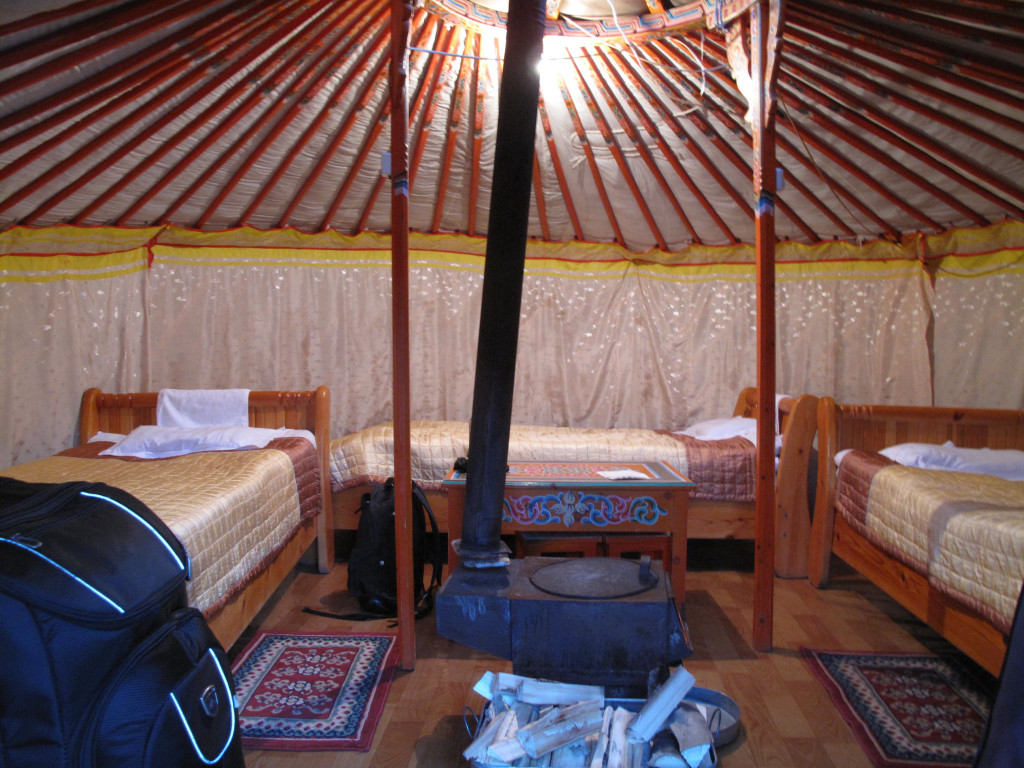 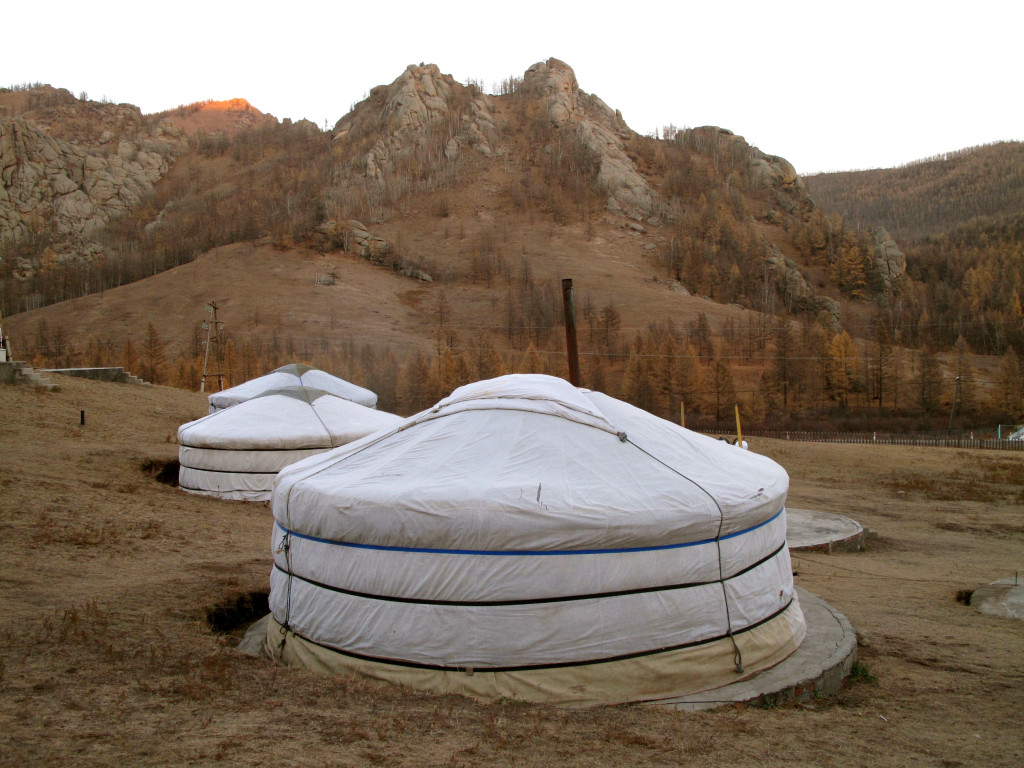 “If you really need to go to the toilet at night,” Yul told us, “make sure to go away from the ger. That way the wolves won’t know where you live.” He smiled again, another quick one, and we weren’t sure if it was a joke.

Yul had already taken us for lunch in Mongolia’s capital, Ulaanbataar, and told us about the country. Landlocked, and neighboured by Russia and China, its history bursts with stories of Genghis Khan, Buddhism, and Communism. I didn’t know much of the country at all; it was a great mystery to me, the place we’d stay for a few days as part of our journey from Beijing to St. Petersburg by train. Although not a part of the traditional Trans-Siberian route, my mum and I both wanted to see this land with our own eyes.

After our lunch in Ulaanbaatar, Yul had taken us by car to Terelj National Park, only an hour or so away. There, we had ridden Bactrian camels, nestled between their humps, clutching to their soft hide. We had then been taken to a family’s ger for a snack of aarul – a curd made of camel milk – and airag – fermented mare’s milk. I was surprised to find I liked it, and the aarul sweetened when dipped in the airag. The family watched with wide eyes as I took my first bite, then laughed when I reached for another piece.

We finally went to our own ger, far down a dusty lane away from the main road. 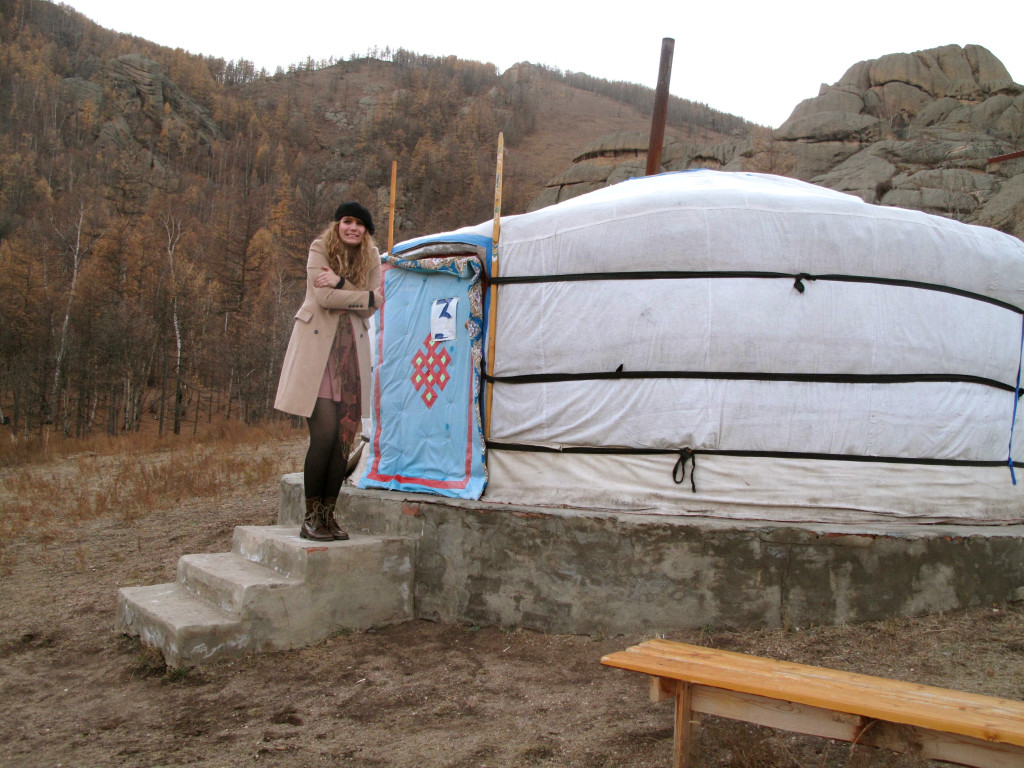 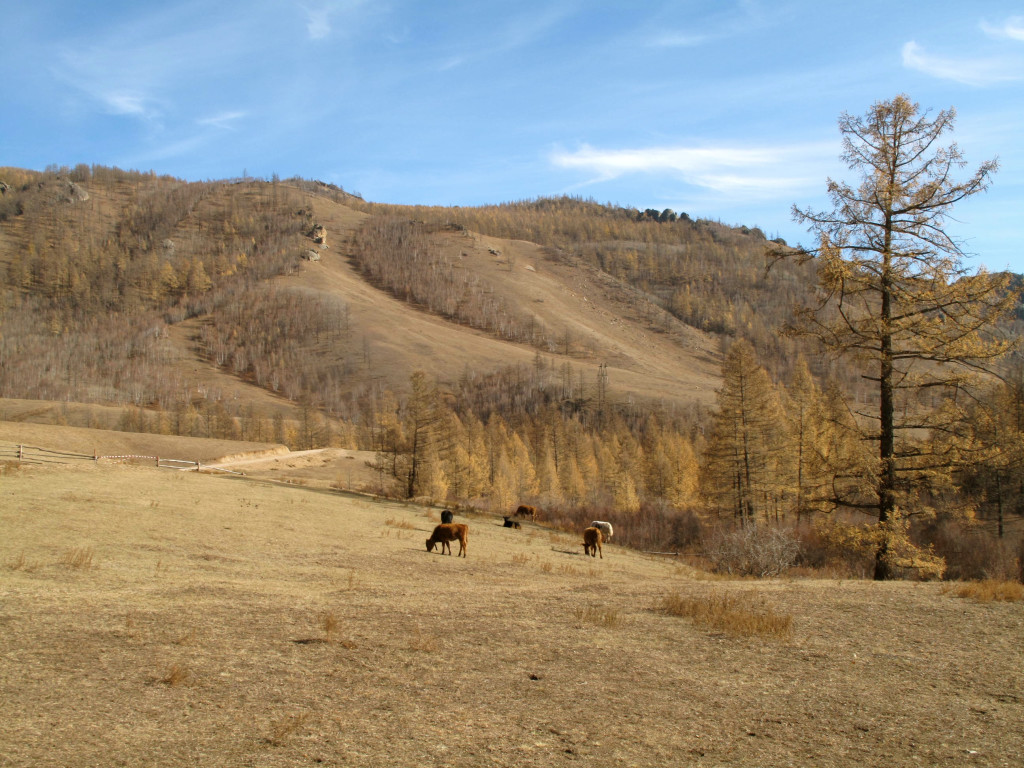 The ger was now almost swelteringly hot; Yul had created a roaring fire in the stove before he left. We bundled up anyway, knowing how cold the night would get on our walk to and from the main lodge. There, we ate a dinner of unidentifiable meat, boiled potatoes, and Chinggis beer, served to us by an older woman who didn’t speak a word of English. As we ate she sat in the corner of the kitchen, watching a soap opera on TV, but every time we caught her eye she waved at us.

After brushing our teeth with the freezing water in the bathroom, we walked back to our ger. The stars were out, more than I could ever possibly imagine; they illuminated the tops of trees and rocks that flanked us to the west, and the stretches of dry earth that laid out for miles in front of us. There was no smoke coming from our chimney, and opening the blue door to our ger proved that the fire had indeed gone out. It was so cold inside we could see our breath. 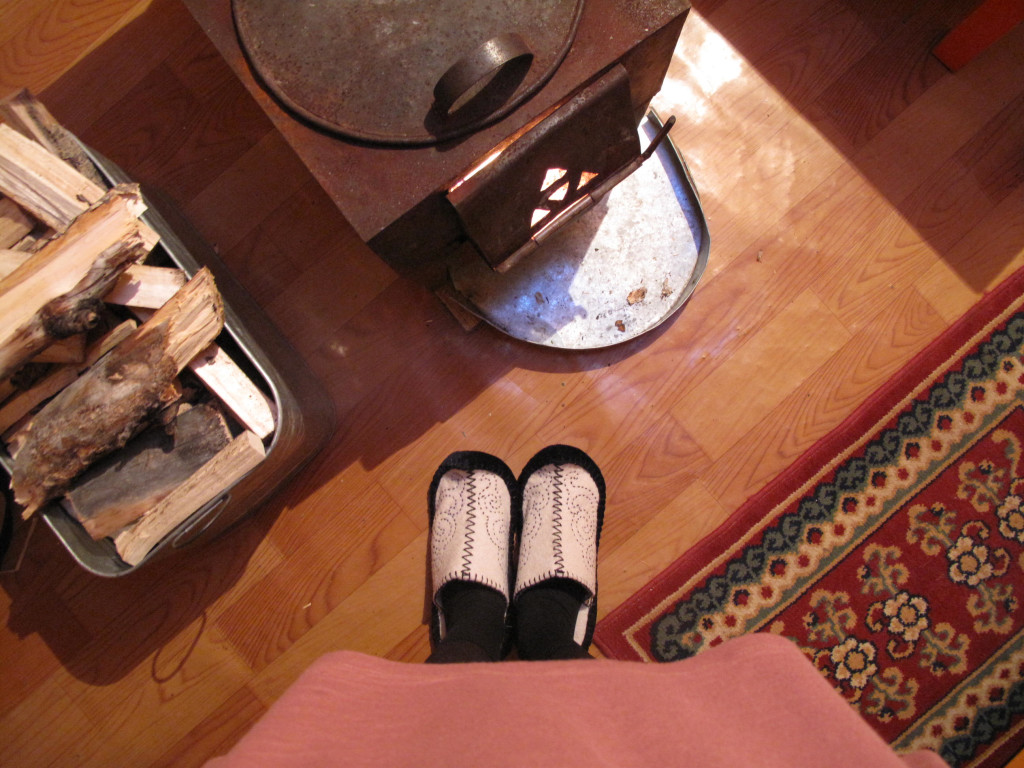 And such became a rhythm over the next few days. We knew, without fail, we’d have to watch the fire and make sure it did not go out. It was amazing how quickly it became a routine, even in the middle of the night; we’d go to bed roasting, with the fire roaring and only one blanket needed. Throughout the night we’d reach for extra blankets, until, shivering, one of us would get up and put as much wood on the fire as possible. When we’d leave the ger – for walks along an empty road, or to ride horses a man brought for us each morning, or to eat in the kitchen of the lodge – we knew we’d return to a cold home. But there was something comforting in watching the flames come to life, knowing we could create the warmth we needed.

When Yul returned a few days later to pick us up and take us to the train station, he asked what we had done with our days.

“We kept the fire going,” my mum said. Yul laughed.

“Yes, you did a good job. I know if foreigners had a good time just by looking at the ger. If there is smoke, they are happy. No smoke, no smiles.”

I remember the days in Mongolia as being very quiet, and very still. I remember the eternal blue sky and the unlimited power of the brown and yellow earth. I remember the warmth more than the cold; of being tucked up in bed at night, listening to the wolves howl in the distance, knowing the stars sequinned the sky above me. 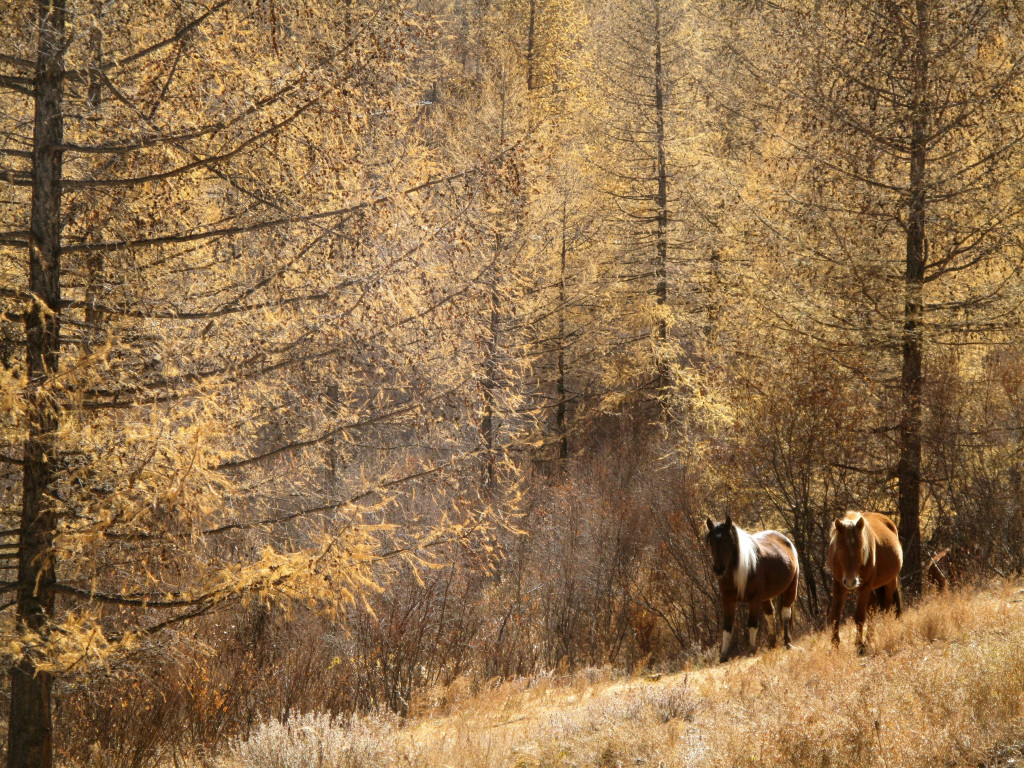 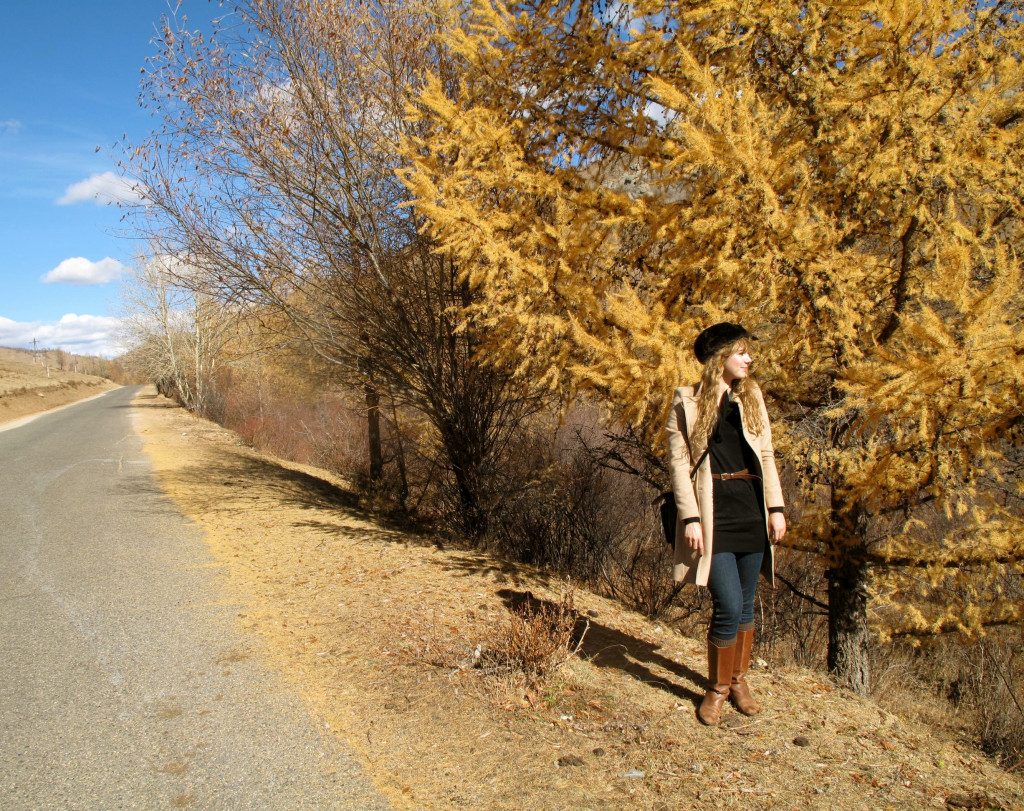 For more on why you should visit Mongolia, check out the post I wrote a few years ago.

Have you been to Mongolia, or would you like to go? Have you ever slept in a ger/yurt?

Poppies at the Tower of London

On Being Addicted to Travelling

Take Me Out to the Ballgame

The Slow Boat To Laos

How to Barter For Souvenirs While Travelling

Around the World: Who Are You?!

I wonder what it must have been like sleeping in the yurt with the heat/cold and the sounds of wolves outside? Did you feel like you could relax?

The wolves didn’t bother me – I felt totally safe inside – but it was definitely difficult to find a comfortable temperature! I had to keep many blankets and layers of clothing close by, but in the end I was always able to fall asleep.

Wow, this is so beautifully written! I’ve been living in China for a while and I hope to travel to Mongolia next year, but your words and photos make me want to go right now! Thanks for sharing this snippet of your special time there.

Thank you so much, Siobhan! I hope you get to visit Mongolia very soon.

I just spent two weeks in Mongolia in August/September, so I definitely understand the sweltering heat of the initial fire in the ger followed by the constant watch to make sure that you do not get left freezing cold once the fire goes out. 🙂 On a different note, most of my Mongolia photos feature green and blue, so I am absolutely captivated by the autumn colors in your pictures!

Ha ha – glad I wasn’t the only one! And I would love to visit Mongolia in summer, I imagine it is so beautiful. Thanks for your comment, Jane!

What a freakin cool experience. I love this, so much. I dream of owning a yurt style resort, I better check this beautiful place out to get some awesome ideas. Haha… Guessing the wolves deterred late night toilet breaks huh?

I did go out once in the middle of the night… but I was pretty scared! I would love to stay in a yurt again – have you heard of the resort on the Isle of Wight?

Oh Brenna, what a unique and unforgettable experience! There are few places that compare to the splendour and isolation of Mongolia. Your descriptions and photos are, as usual, breath-taking. The memories created by these adventures never leave…

You’re right… I can remember it like it was yesterday! Let’s go back. 🙂

What i beautiful story of your time in Mongolia. I hadnt really thought much about it before, but its now on the bucket list. Lovely that you got to spend time with your Mum there too, I would really love to bring my Mum travelling with me.

Yes, Mongolia is a fantastic country! I think it is perhaps a bit underrated, as it doesn’t cross a lot of people’s minds. I highly recommend it, though!

It’s amazing how much your photographs of the landscape look like they could be in the US somewhere! I’d always heard that about Mongolia but never realized how true it was until now.

What an amazing experience. There must have been something so peaceful about having literally nothing to do expect to tend the fire( I am sure that got old fast though)!

We were pretty relaxed the whole time… but I can imagine that after a few more days we might have been very bored!

[…] to see Mongolia, too. After a brief sojourn in Beijing, a train to Ulaanbaatar, a stay in the Terelj National Park of Mongolia, and another train, we finally arrived at the Mongolian-Russian border, which, if we cleared, would […]

I know you posted this ages ago, but I was just wondering if you could tell me how you organised this stay at the ger? Myself and a friend are going to be in Mongolia for 5 nights in May and would love to do something like this!! Did you organise it once you arrived or prior to your trip? Was it through a company?

It looks amazing!! Thanks.

Ah I love this. I really want to do it one day.

It was such a good trip… I highly recommend it! 🙂