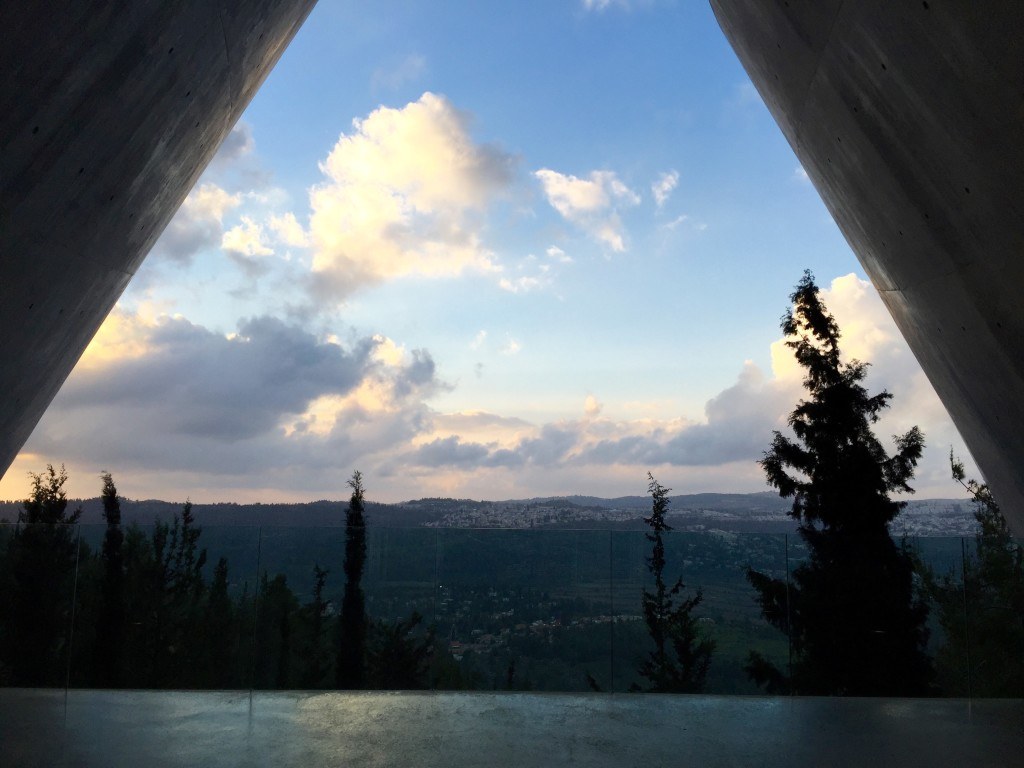 Looking out over Jerusalem from Yad Vashem

I stepped into the dark corridor of Yad Vashem’s Holocaust History Museum, the skylight above providing a sliver of sunlight. It’s difficult to describe what it’s like to be here; it’s overwhelming and emotional, but it holds such great significance. In my opinion, it’s worth a trip to Israel just to experience it.

Found on the western slope of Mount Herzl of Jerusalem, Yad Vashem is Israel’s second most-visited tourist site (the Wailing Wall is the first). The memorial, sprawling over many acres of land, includes the Holocaust History Museum, the Hall of Remembrance, the Garden of the Righteous Among the Nations, the Museum of Holocaust Art, the Children’s Memorial, and many other buildings. As the memorial seeks to educate, document, and commemorate the Holocaust – the genocide that claimed over six million Jewish lives during WWII, killing two thirds of the European Jewish population – it also houses a synagogue, publishing house, research institute, library, and education centre.

This was actually my second visit to Yad Vashem; I first went in 2013, when my sister was living in Tel Aviv and I spent ten days visiting her. The memorial does not lose any of its power the second time around, and I doubt it ever will. First opened to the public in 1957, it has since had a refurbishment designed by Israeli-Canadian architect Moshe Safdie, and the new museum is exquisite in its detail and design, a place to highlight the lives so brutally cut short by the Holocaust.

While many Holocaust and WWII exhibits I have been to documented the rise of Nazism and anti-Semitism, Yad Vashem aims to bring out the personal stories behind the victims, the intimate and intricate details that make up an individual life. Wandering around the ten exhibition halls in the museum, you are surrounded by videos, photographs, letters, and mementos of both those who survived the Holocaust and those who did not. It goes in-depth into events such as the Jewish resistance in the Warsaw ghetto, the death marches led by Nazi soldiers, the uprisings in death camps in Poland, and the efforts of non-Jews who attempted to hide and save Jewish people being persecuted – all narrated and described by people who were there and who were put through these nightmares.

As Avner Shalev, the museum’s curator said, visiting the museum is like “looking into the eyes of the individuals. There weren’t six million victims, there were six million individual murders.” This idea culminates in the Hall of Names, a hall comprised to two cones, one that’s ten metres high, and one that reciprocates ten meters below it. On the upper cone shows photographs of just some of the millions of people murdered during the Holocaust, people of all ages and backgrounds, which are reflected in the water at the very base of the lower cone. Surrounding all of this are the thousands of binders of testimony, testimony which fills over 2.2 million pages. 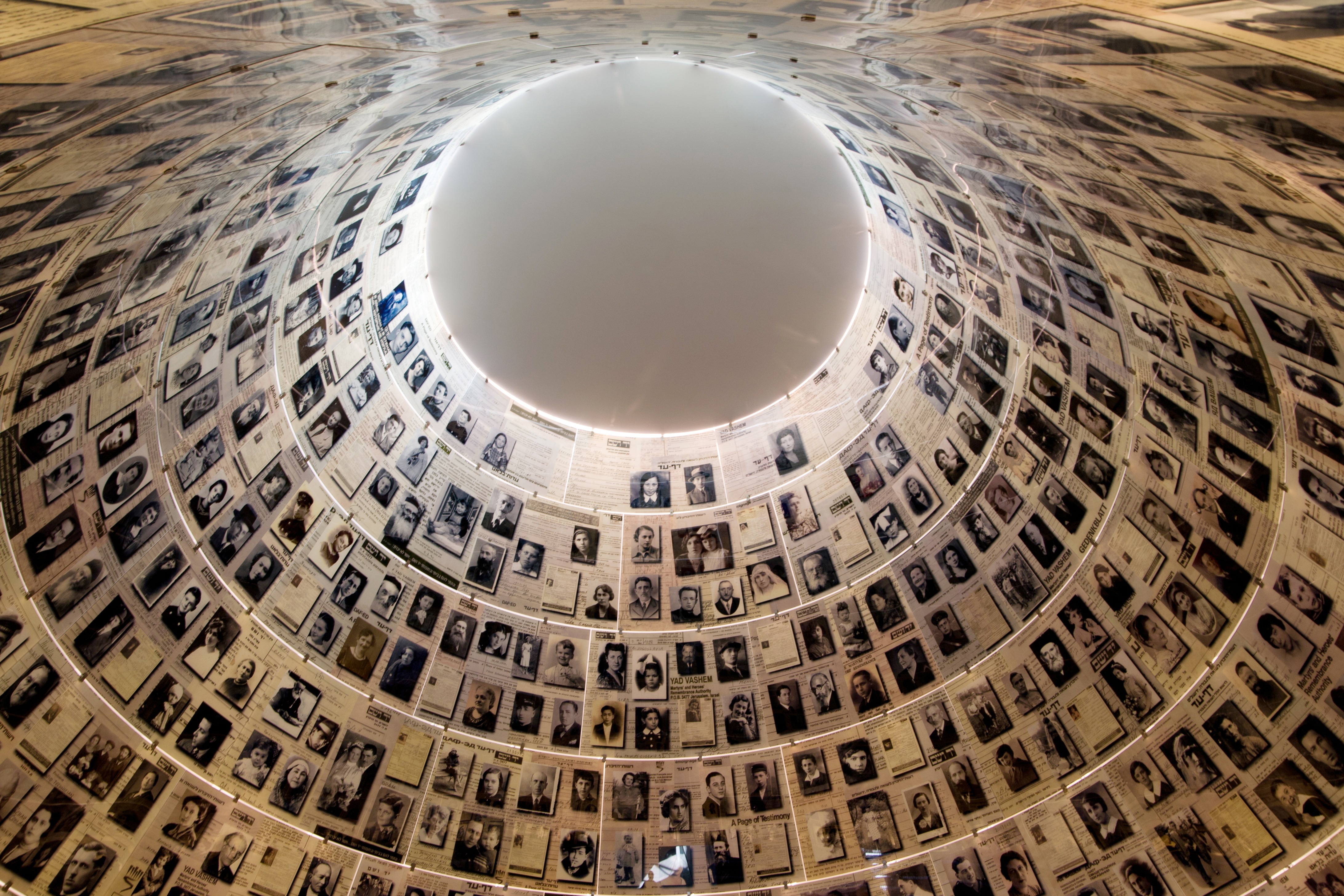 Photo credit: Noam Chen and the Israel Ministry of Tourism

Moving on from the Holocaust History museum, you can visit the many other memorials and museums built in commemoration, including the Museum of Holocaust Art, which features the artwork of victims and survivors of the Holocaust. Perhaps one of the most emotional and moving memorials is the Children’s Memorial, dedicated to the approximately 1.5 million children who were murdered by the Nazi regime.

As Yad Vashem also wanted to honour the non-Jews who risked their lives to save Jewish people during the holocaust (people like Oskar Schindler, whose grave you can visit in Jerusalem and who saved over 1,200 Jews, and Sir Nicholas Winton, who saved 669 children from Nazi death camps), there is the Garden of the Righteous Among the Nations. Nearly 25,000 people have been recognised for their efforts. 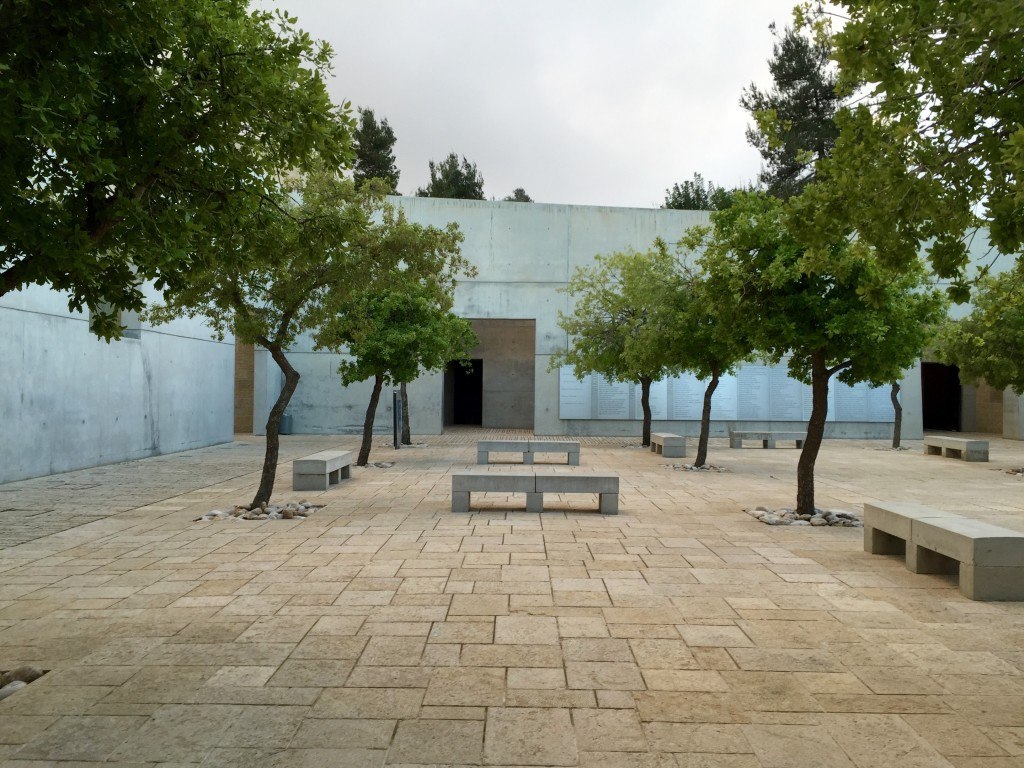 And so yes, Yad Vashem is an extremely difficult place to visit. It is hard for me to describe it; often when you tell someone you “must visit” a place, you use adjectives like amazing, beautiful, and wonderful. But you visit Yad Vashem to learn, and to pay your respects. It is an overwhelming place, but an important one, especially as we still see what humanity is capable of doing to itself, of what people are still capable of doing to one another.

I broke down many times during both visits to the memorial – watching the video of children begging in the Warsaw ghetto, reading diary entries of the victims, seeing the photographs of survivors being freed from the camps, their faces haunted and hollow – but I consider Yad Vashem to be one of the most important memorials/museums I have ever been to. 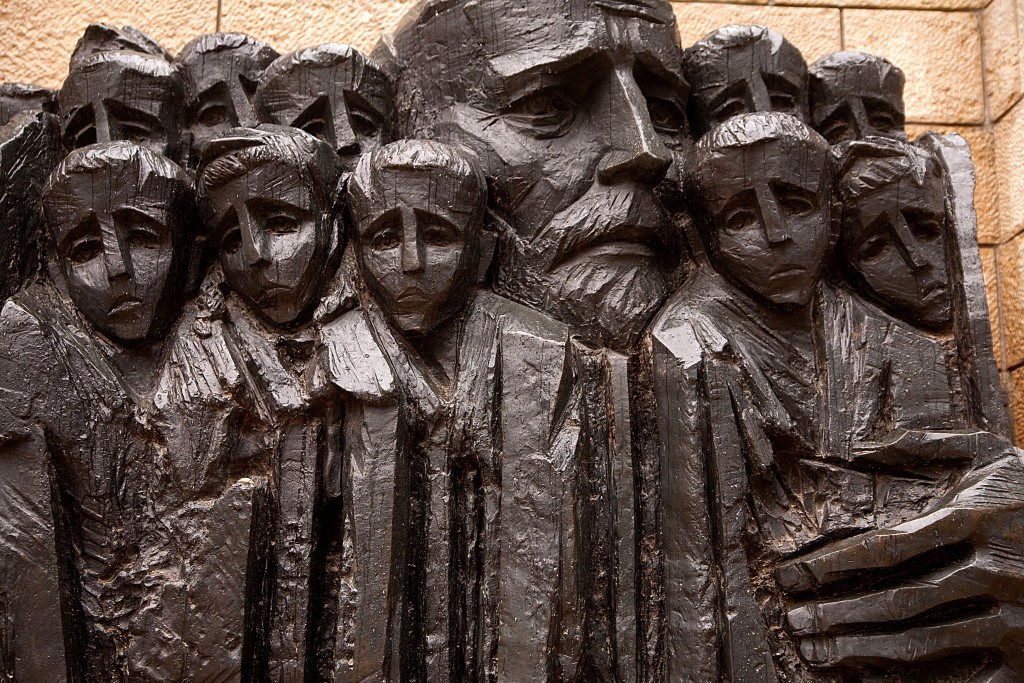 Photo credit: Noam Chen and the Israel Ministry of Tourism

I don’t often talk about my family’s background on here, but I’m a second-generation Canadian. All of my grandparents’ families were born in Europe, including my maternal grandfather, whose family comes from Russia. When his family moved to Canada, they registered with the name “Freeman”, which is my mother’s maiden name. Before that, however, they were called Freidman, a family of Russian Jews. My family doesn’t claim to be Jewish any more than they claim to be Christian, Buddhist, Hindu, or Muslim, but I do wonder what happened to my Jewish family during the war, and it’s something I want to investigate if possible. Regardless of religion or background, however, I think it absolutely necessary to acknowledge the horror of the Holocaust and its devastating effects on the world. Yad Vashem does an incredible job of both documenting and commemorating the Holocaust, and I wholeheartedly recommend a visit. 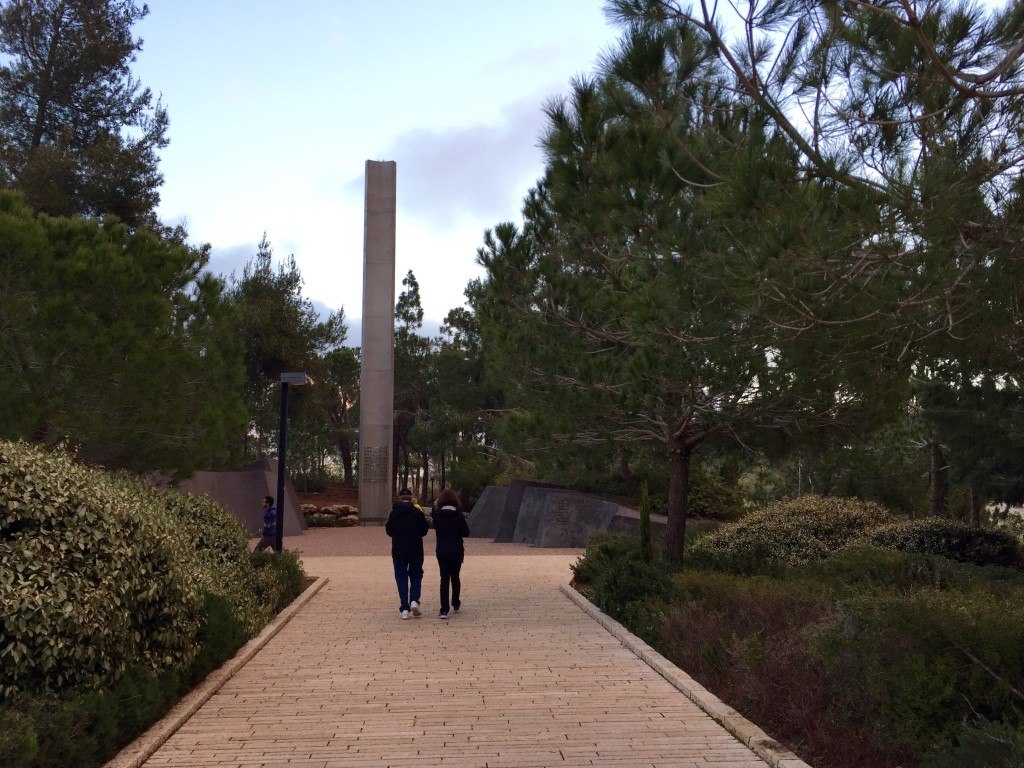 Yad Vashem is free to enter, but please note that it is closed on Saturdays (the Sabbath) and all Jewish holidays. I would advise planning for at least three hours to explore the memorial, if not a full day. You can check the website for regular hours – I do recommend spending some time on the site as there is a lot more information on the things I’ve talked about here, including videos, photographs, examples of artwork, and stories that need to be told.

Many thanks to the Israel Government Tourist Office for my trip to the country. All opinions are, of course, my own.

What to Wear in Thailand

Six Years of This Battered Suitcase: What Next?

This looks like a really moving memorial, I’d love to visit. In fact I’d love to just visit Israel! Thanks for sharing!

Thanks Danielle… yes, it’s a really moving place. I hope you get to visit it!

The conception of the museum reminded me much of the Daniel Liebeskind’s Jewish museum in Berlin. Visiting that one was as heartbreaking as you mentioned for this one too. I was speechless for hours after it.

I think you did a great job of highlighting the importance of visiting the museum and memorial without sensationalizing it, and perhaps that’s why even reading the words brought tears to my eyes. As you say, it is so important to look back at these events in light of what is happening around the world today and to reflect on our own humanity. Thank you for sharing what I’m sure was a difficult but powerful experience, and I hope one day I can visit and see it for myself.

Thank you very much, Veena. Yes, it is definitely a difficult place, but very powerful and, I think, very important.

What a beautiful but heartbreaking place, I can imagine it would be a place that I would shed a lot of tears.

The sculpture of the faces is very haunting, I can imagine this touching a lot of people who visit.

It is not somewhere I would probably have ever learnt about thankyou for sharing your experience. x

I hope you get to see it one day, Emma – it is definitely very emotional, though.

I currently have “Night” by Elie Wiesel sitting on my nightstand and am trying to gather the.. stamina? it will take to read it.

Yad Vashem is a very emotional place, especially as you can read personal stories of the victims. A visit there seems quite surreal.

This is such a special place. I’m so glad we got a chance to go together.

Me too sister xo