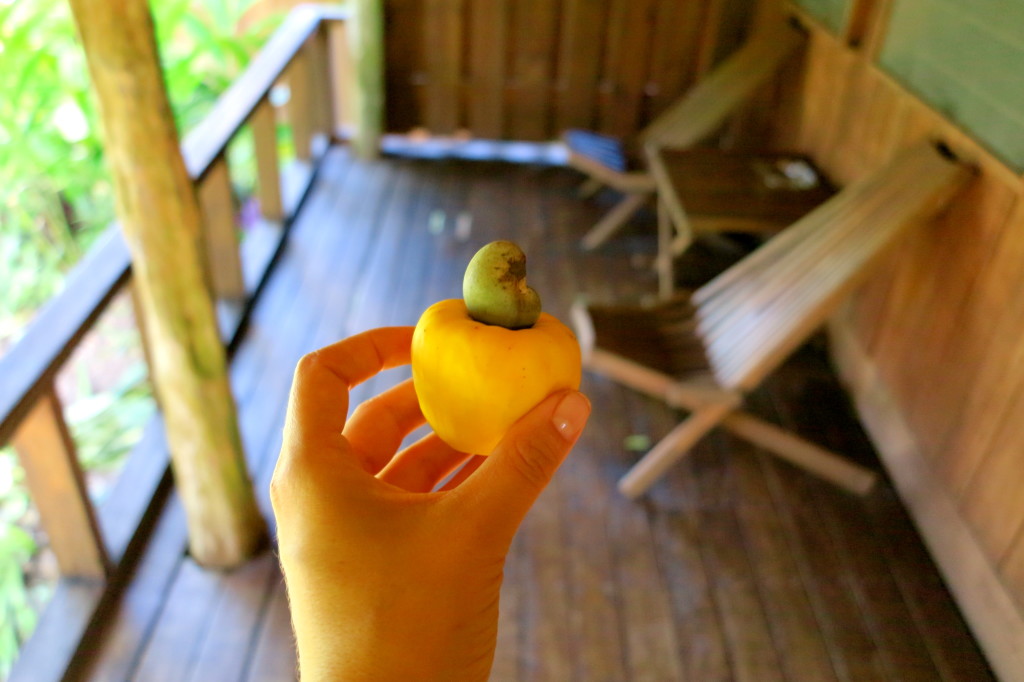 When my mum and I first arrived in Belize, we drove along a bumpy road for about an hour before reaching the river; once there, we caught a boat that took us deep into the jungle, near the Lamanai ruins. Somewhere along that first road our driver stopped and picked us cashew apples, or cashew fruit, which I had never seen or tried or even heard of. I guess I never stopped to think where cashews come from; I certainly didn’t imagine they grew this way, one to a fruit.

I later learned that cashew apples are used in a variety of ways around Central and South America, jams and chutneys and curries and vinegar, eaten fresh and eaten cooked, made into juice and into flavouring for alcoholic drinks, including caipirinhas in Brazil. In many places, the fruit is just as popular or even more popular than the nut; I had probably never tried it because the fruit doesn’t travel very well. I also later learned that the skin has a waxy, slightly astringent taste, which can be dulled by boiling or steaming the fruit quickly before consumption. The feeling on my tongue I talk about in the video below is actually caused by urushiol (also found in the skin of mangoes and the active allergen in poison ivy/poison oak) and often gives people allergic reactions. My mum, who is allergic to mango, did indeed have a reaction when trying one sip of cashew wine a few days later.

In this video, you’ll see the first time I try the fruit, and my initial reactions. Please note a) all the mosquito bites on my arm b) the fact that I am wearing a fancy dress in the jungle (it was actually my birthday that day, and we were celebrating) and c) I claim that I will never try cashew apple again, which turned out to be a lie. Prepared properly, it’s actually quite delicious.

Have you ever tried a cashew apple? Would you like to, despite my reaction in the video?

A Tour of the Amalfi Coast: Worth the...

GIVEAWAY: Thinking About Gratitude With Trover

Here Are Some Countries That Aren’t Shitholes

Around the World: Cats

Ohhhhh I also had no idea that that was were cashews came from! I just remember mom telling me about her horrible reaction! I loved watching your face when you tried it because I have seen that face so many times before 😉 p.s. I love that you are wearing a dress, long earrings, and makeup in the middle of the jungle xo

You know me (re: the dress and earrings)…

And I didn’t know that about cashews either! I guess I never stopped to think where they came from. Blew my mind a little bit.