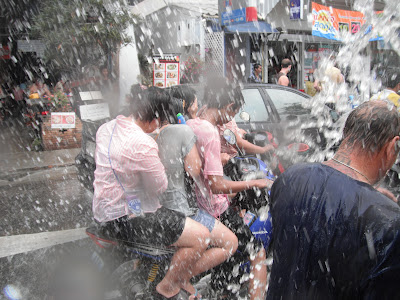 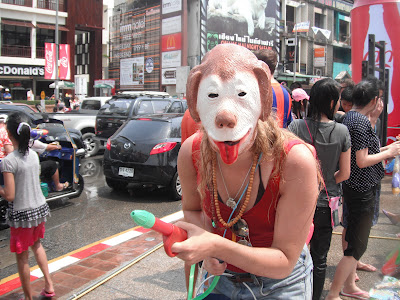 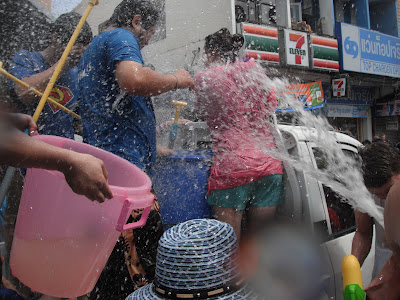 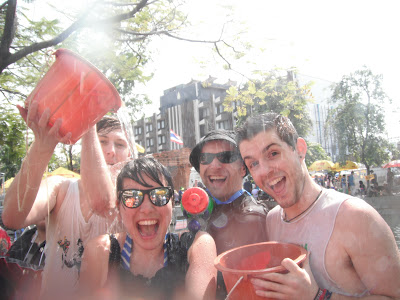 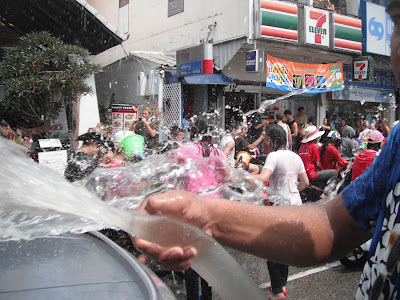 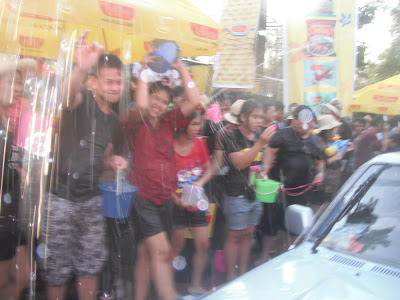 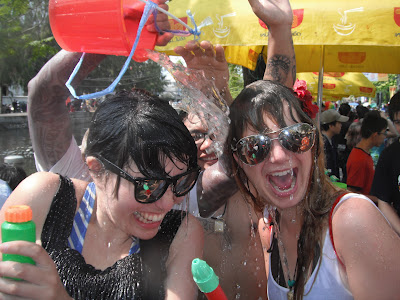 Chiang Mai, Thailand
I’m currently sitting in my new favourite cafe in Antigua, Guatemala, happy to have some good food and some strong internet. So why am I posting photos of a water festival, Songkran, that I attended last year in Thailand?
It’s been raining here in Antigua, raining a lot. I knew it would rain, as it’s the wet season, but I wasn’t expecting nearly 48 hours of torrential downpour, the cobblestoned streets so slicked with water and puddles that even going to the shop around the corner means sacrificing a pair of shoes. Being the kind of woman who likes to pack for the worst (and having a very heavy backpack to show for it), I have an umbrella and a rain jacket already, but there’s nothing I own that can actually motivate me to walk around the city, this colourful city that has been muted by dark skies and heavy rain. There’s something romantic about it all, of course, of sitting on the covered terrace and watching storms roll in from over the surrounding volcanoes, of hearing the crack of thunder while you chat with strangers by candlelight, of seeing other travellers arrive soaked from head to toe, soaked but still smiling.
I was in Chiang Mai in mid-April of last year, which happily (and not entirely coincidentally) coincided with Songkran. The week I spent there presented both rain and sunshine, skies that filled with grey clouds and skies that shone brilliant blue. It didn’t matter, however, because all day, every day, the streets were filled with the festival, people partying and drinking and, most importantly, splashing each other with water to celebrate the Thai New Year. From morning’s first light until well after the sun went down, stepping outside was like stepping into an inescapable gauntlet of water guns, hoses, buckets, and even drive-by drenchings. We were soaked to the bone day in and day out, so much so that I didn’t even bother hanging my clothes to dry at the end of the day, as wearing dry clothes made you an instant target.
I have managed to stay fairly dry while in Antigua; today, finally, the sun broke through the clouds and the streets are brighter, more accessible. I’ll take advantage of it while I can; I’ll explore, I’ll sit in the main square, I’ll look up and I’ll see nothing but blue. And when the rain inevitably returns, I’ll embrace it, for there’s nothing else I can do.
*Don’t forget to follow me on Facebook and Twitter!*
AsiaGuatemalaNorth AmericaThailand
6 comments
0
Facebook Twitter Google + Pinterest

The Perils Of The Solo Traveller

Things to Do in Brandon, Manitoba

Tips For Feeling Fashionable While You Travel

Riding Into The Sunset

The Beginning Of Fire

Best of London: “Ride the Slide” at ArcelorMittal...

I love the African rains we get here – as long as I’m at home when they start! (I was stuck driving once and couldn’t see mere feet in front of me and the water from the flooded roads was going over the hood of my SUV – scary stuff!) But if I can sit back on the patio or from my living room looking out over the town with a warm cup of tea or coffee or wine – I’m in heaven.

I was in Chiang Mai for a month last year and so many people told me about Songkran. I unfortunately missed it but can’t wait to go back and time my next trip as you did yours! Sounds like a blast!

The second I saw the 7-11 in the background, I knew you had to be in Thailand! I am so sad I didn’t make it to Chang Mai. Next time! Maybe i’ll plan it so i’m there during this festival!

Jay – I totally agree, I love the rain when I have a good book and a glass of wine! Travelling the rain is awful, though…

Britany – I hope you liked Chiang Mai as much as I did! Hopefully you’ll get to experience Songkran at some point…

Bailey – I really liked Chiang Mai, but I liked Pai even better! You should definitely check it out sometime.

This is totally on my Bucket List, what awesome pics! Enjoy Guatemala for me, I love that country!!!

Andi – You definitely have to get to Songkran one day, you’d love it!