Cusco and the Dreaded Altitude Sickness 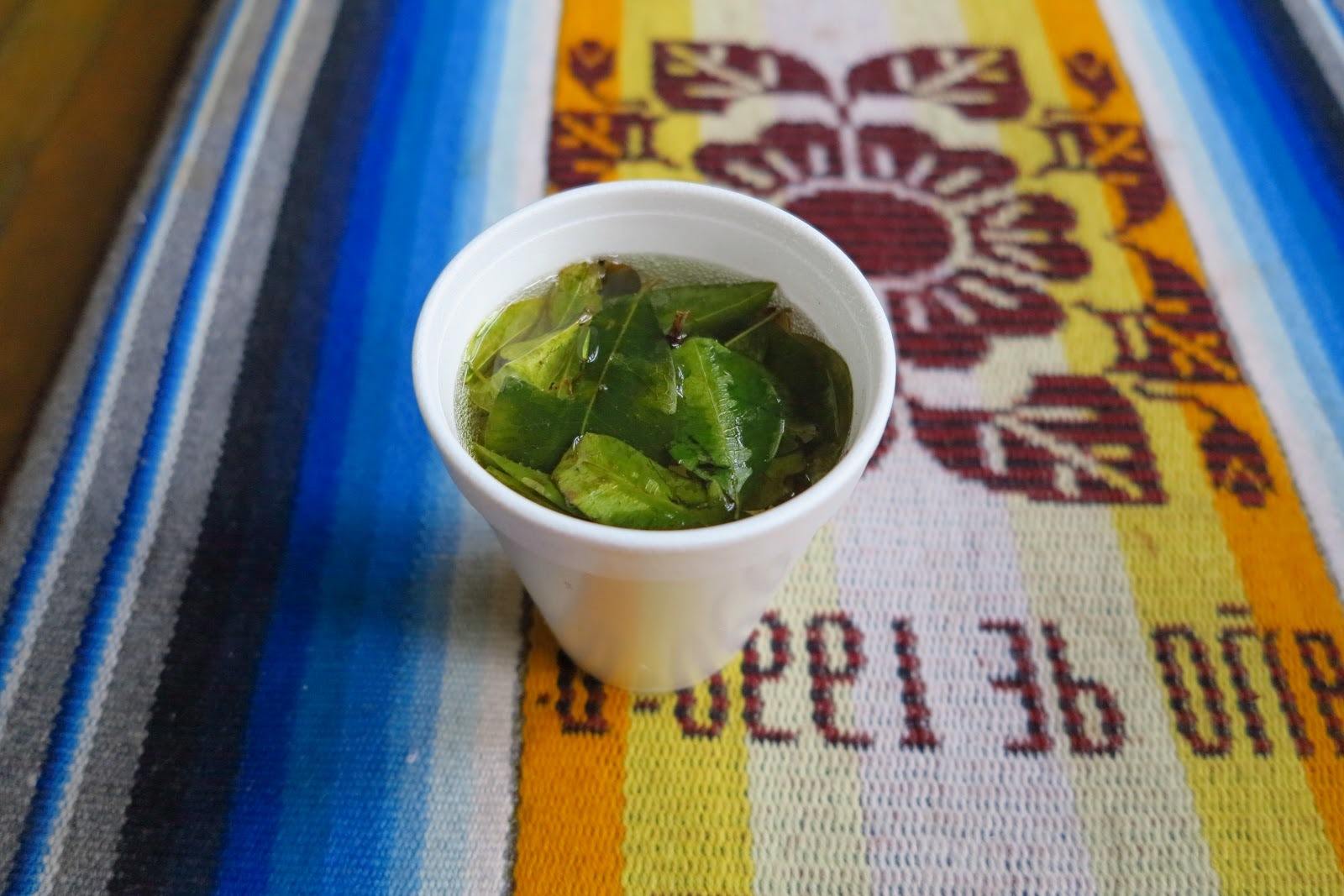 Coca Tea in Cusco, Peru
I am currently in Cusco, Peru. The altitude here is approximately 3,300 metres, or 10,800 feet. To put that in some perspective, I am originally from Winnipeg, Canada, which has an altitude of 232 metres or 761 feet. What this means is that I am perpetually out of breath.
Altitude sickness can be a serious ailment; it occurs most commonly at altitudes of 2,400 metres and up. While I had a bit of practise in Quito, Ecuador (altitude 2,850 metres), I knew that Cusco had a reputation for being a difficult city to acclimatize to. I could feel the effects taking place on my night bus from Arequipa (ears popping, a slight headache), but I wasn´t really prepared for the long-term (albeit mild) effects that the altitude has had on me.
Some common side effects of altitude sickness include insomnia, dizziness, lack of appetite, pins and needles, vomiting, headaches, nausea, drowsiness, nosebleeds, shortness of breath, fatigue, and a general malaise. Sounds fun, eh?? While I did not experience any of these things severely, I experienced a few of them, and, being the smart cookie that I am, kept proclaiming to Kerri, “Wow, why am I so tired?!” and “I had the worst sleep last night!!” She gently had to remind me of where I was and why I felt that way.
On the first day we arrived, Sunday, Kerri felt quite ill and, sensibly, lounged in the hostel and drank lots of coca tea. After a short nap, I felt adventurous, brave even, and ventured out into town. Within minutes, I was out of breath – no, I wasn’t climbing stairs or walking uphill or even walking that fast – I was just walking. I also felt a distinct tingling and numbness in my hands, and a need to sit down every twenty minutes or so. That night, I could not fall asleep for hours, tossing and turning even though I felt exhausted. I also ate only once, at 2pm, and had no desire to eat again. So, insomnia, dizziness, lack of appetite, pins and needles, drowsiness, shortness of breath and fatigue? Hi Cusco, nice to meet you! Though my symptoms were really quite mild, it was still a shock to experience them at all.
Over the past few days we have definitely acclimatized, though we still need to remind ourselves to slow down and not go so quickly. With all of the amazing restaurants in town, my appetite has come back, and I´m sleeping like a baby under my goose-down duvet. However (apologies to the squeamish), I have noticed that when I blow my nose, a bit of blood comes out, so I’m probably a prairie girl for life.
To prevent any severe symptoms, we avoided alcohol the first few days and really took it easy. I took a few pills of acetazolamide (which is supposed to help) but, as I don’t really like to take medicine unless absolutely necessary, stopped after a few days and have instead been drinking a few cups of coca tea a day. Coca de mate (as it is called here) is essentially just coca leaves steeped in hot water. Though illegal in many countries (yes, these are the same coca leaves that are the source of cocaine), the effect is the same as drinking a regular cup of coffee, with the added benefit that it really helps with altitude sickness. I know I’ll be relying on it again when I head to La Paz next week…
Have you ever experienced altitude sickness? Where? What did you do to try to cure it?
*Follow me on Facebook and Twitter!*
PeruSouth America
18 comments
1
Facebook Twitter Google + Pinterest

A Day In Indonesia

Take Me Out to the Ballgame

A Journey To Amritsar

The Music of Basilicata

One In Four Thousand

Yikes! Fortunately, I wasn’t affected by altitude sickness. When I was in Cusco, my two sisters ended up needing a tank of oxygen, and meanwhile I was running around climbing mountains… I did make sure to drink lots of coca tea.

Audrey – Wow, really? As I said, my symptoms were really mild, but I was still shocked that I experienced them at all!

I got it in Cusco. Lots of sleep and coca de mate did the job for me! (I think we had pills but didn’t take them…not sure, too long ago to remember!)

I was so ill that I was on an oxygen tank the whole time, no acclimating for me. 🙁

I’ll be there soon enough, thanks for the advice and hoping you feel better soon!

Jill – That’s been my remedy, too! Now that I’m back in Cusco after Machu Picchu I feel much better..

Kelly – Thanks! I feel great now, it was just those first few days of mild discomfort. Drink lots of coca tea!!

My memory of Cusco was amoebas after eating the local ‘delicacy’ cuy (translated – guinea pig 🙁 ) But acclimatized quickly once up and around having arrived from Otavalo, Equador.

Hello,
I am deciding between an internship in Cuzco or Otavalo. Would you mind giving me some recommendations and inforamtion about both places and which you might choose.

I’ve written about both on the blog so you can take a look! Cusco has more tourists if that affects anything for you…

buc – I didn’t get to try cuy in South America, and I wish I had!

I know this comment is late and random, but I bet it’s actually the diamox/acetayzolamide that caused the tingling in the extremities. Classic side effect. Altitude isn’t known to do that, which is hopefully good news for future travel. 🙂 (Also, as a former flatlander who now lives at 6,000 feet, I can tell you that you could definitely acclimatize, and probably more quickly than you think. The bloody nose is almost certainly from dryness of the air — common at altitude — and not from anything inherently ill-suited to the altitude about you.)

Yes, I would agree – which is why I stopped taking the pills and switched to coca tea. I hated the tingling hands. Also, I’m sure I could acclimatise with time… but I was only there for a week or so!

Altitude sickness — every single time I get on an airplane! Splitting headache, every inch of my body hurts, have zero appetite, drowsiness but can’t sleep, dizziness, fatigue, and shortness of breath. And nasty earaches from all the popping. (My ears pop crossing a local bridge that’s 230 feet high) I fly in a highly drugged condition (Gravol is my friend) just to survive. As soon as the airplane lands, the symptoms are gone.
Dad says that when we drove through the Rocky Mountains, when I was 6 years old, I was pretty sick the whole time we were at altitude. When I was 17 we drove through Yellowstone and I don’t remember any side effects, but it was construction the whole way and we drove really, really slowly.
I think that the dread of feeling so horrible on an airplane is my number one reservation about travelling.

Oh wow, I’m so sorry to hear that you struggle with it so much! I wonder if coca tea would help…

I just got back from Cuzco! I had some trouble at first, but lots and lots of water helps. Additionally we drank coca tea and I took Diamox. I never had any major issues, but hiking to Machu Picchu via the Salkantay Trek was still quite the feat.
Another thing to look for is the coca candies that are around town or the bags of leaves that you can roll and leave in your cheek. If that doesn’t work, our guide suggested a strong lotion/floral aroma. If you rub into your hands and take deep breaths through your nose it helps calm you down/regain your breath!

Thanks for posting this, Kristin! I think I’ll be better prepared for next time. Hope you had a great time!

We are here right now. We’ve been at sea level for the past month in places like Easter island Santiago and a cruise around the entire continent. First day arriving at Cusco we headed to Rainbow mountain (we live on Saskatchewan $. Even on horse back the ride was physically painful. We have e been taking the ibuprofen and the prescription altitude sickness pills but the pains on the next and head and joints and at times it actually hurts to breathe. Like you have pneumonia. Nosebleeds and vomiting have all happened. No appetite and I’m guessing we may be slightly dehydrated. The acid build up in your throat until you vomit is a horrible feeling. The. There is relief for a bit. We did Machu Picchu yesterday which was lovely. Head to lake titicaca today. Then down to Antarctica and then back to chilie to the vet clinic. We found a sick dog on Puerto montt. The only sick stray dog we’ve seen since oct 23. Paid for his care in advance and the. We’re taking him back to Canada with us. Just working on the Canada paperwork now. Thanks for your post. I really only though people carried oxygen tanks in their backpacks at Everest but they are everywhere. Haven’t used the one at the hotel desk yet but might give it a bit this morning