Where to See Wisteria in London 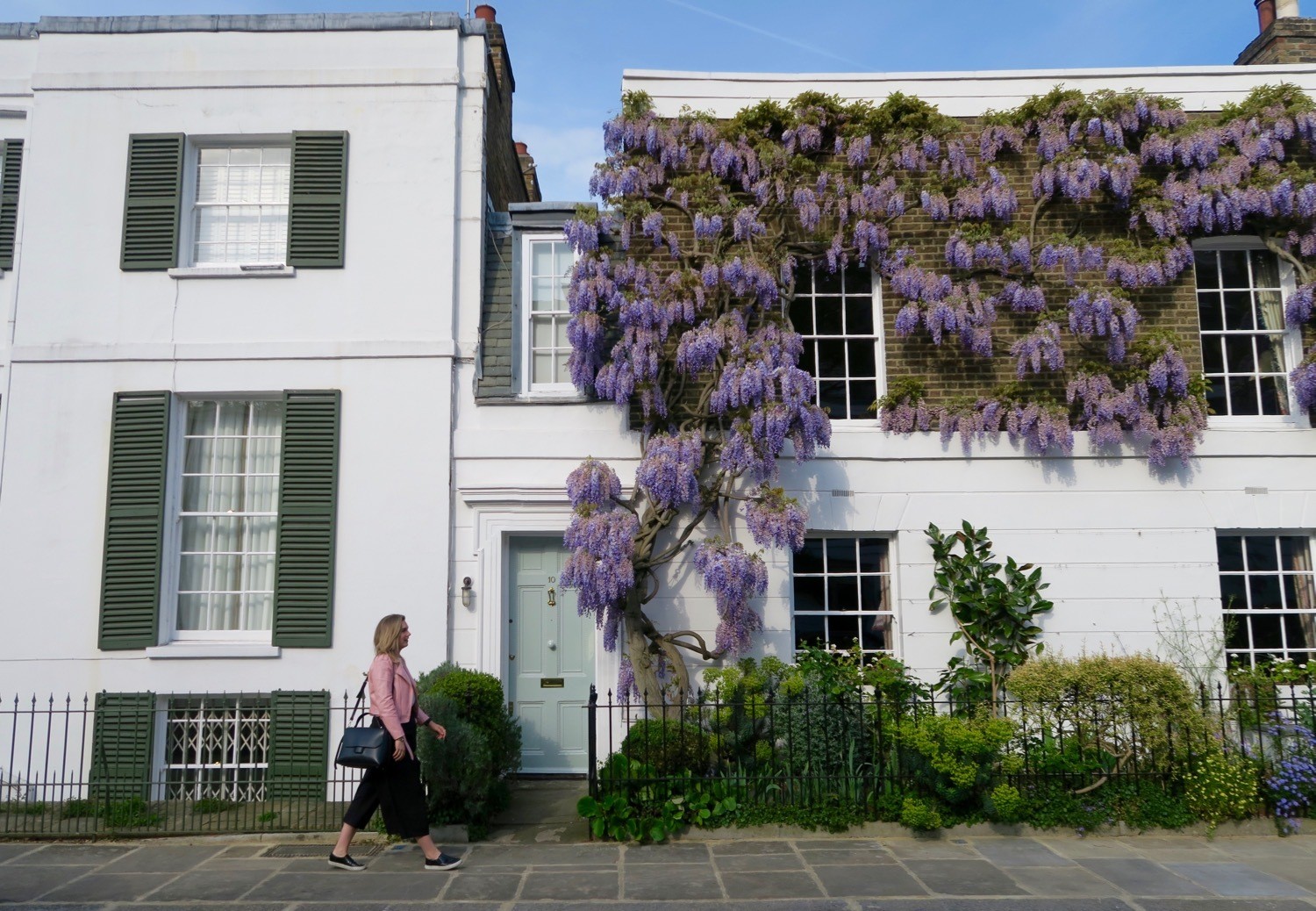 It’s the end of March, which means spring is just around the corner in London. After living there for five years, there really is no denying it: London is one of the most beautiful cities in the world to photograph. And while there’s some truth to the stereotype that London is often fraught with gloomy skies, when London wants to show off, it shows off. One example of this is spring, when the city fills with opportunity to see wisteria in London.

You often smell the wisteria before you see it, that unmistakable scent of spring. While wisteria has a fairly short blooming period – usually only a few weeks – I believe it makes for some of the prettiest photos of London, especially if you’re lucky enough to catch it on a sunny day. It’s certainly a popular time for Instagrammers in London; there’s even a hashtag called #wisteriahysteria because it’s just so hard to resist taking a photo of the purple blooms. 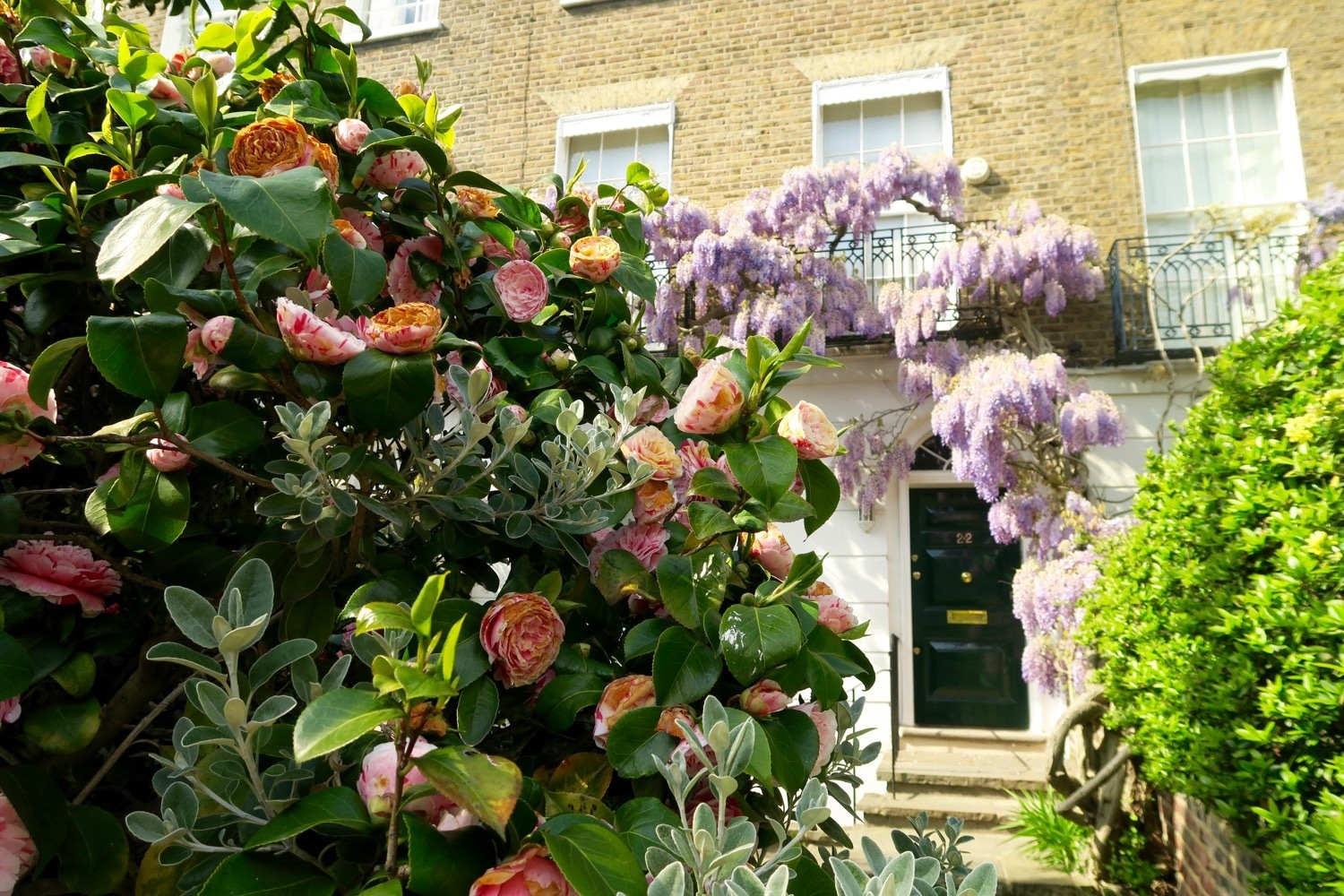 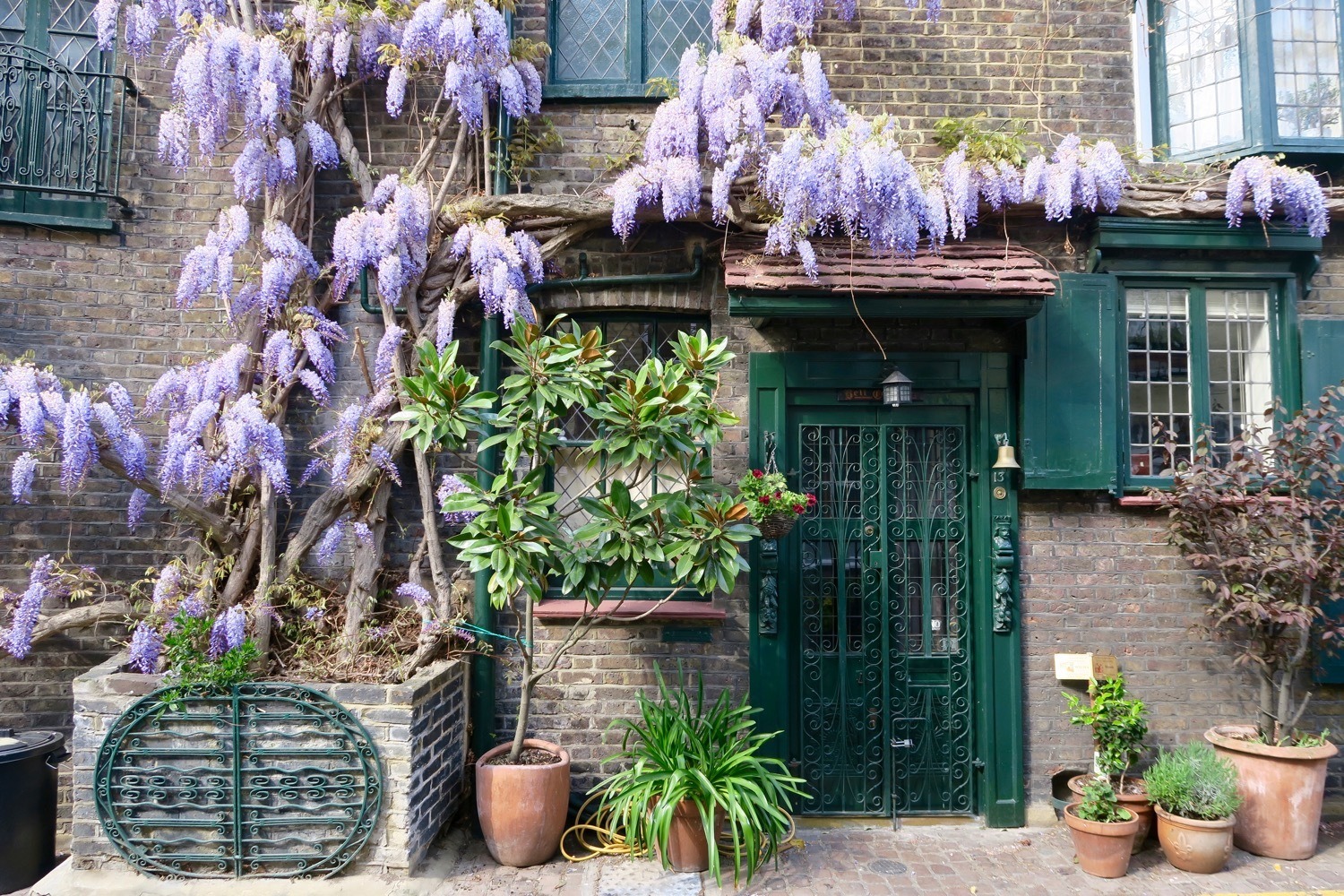 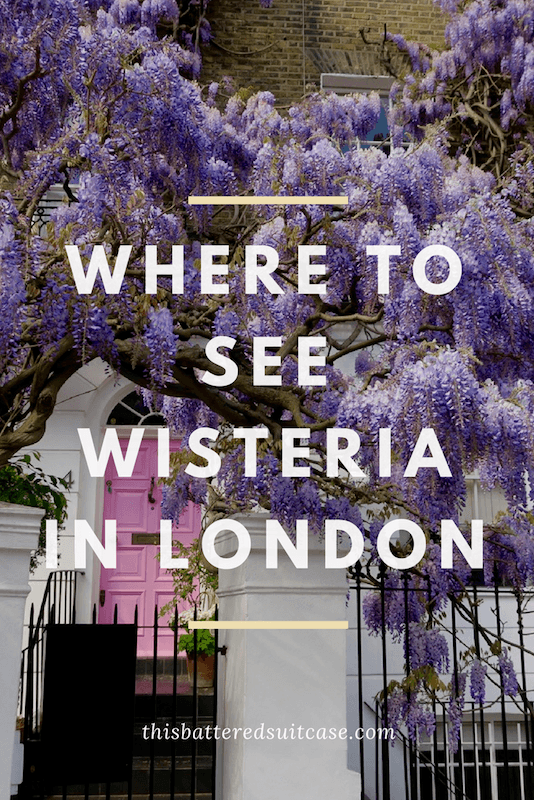 While the wisteria season changes every year, the flowers usually start to bloom in April and can continue blooming until May. Although long-time readers know that I usually spend most of my time in East London, there’s no denying that some of the best wisteria spotting takes place in the west, including in Kensington, Chelsea, and Notting Hill.

So if you’re fortunate enough to be in the English capital in that time, here are some of the best places to see wisteria in London. My suggestion? Plot out a walking tour for yourself and make a day of it, as all of these locations are fairly close to one another.

Where to see wisteria in London: 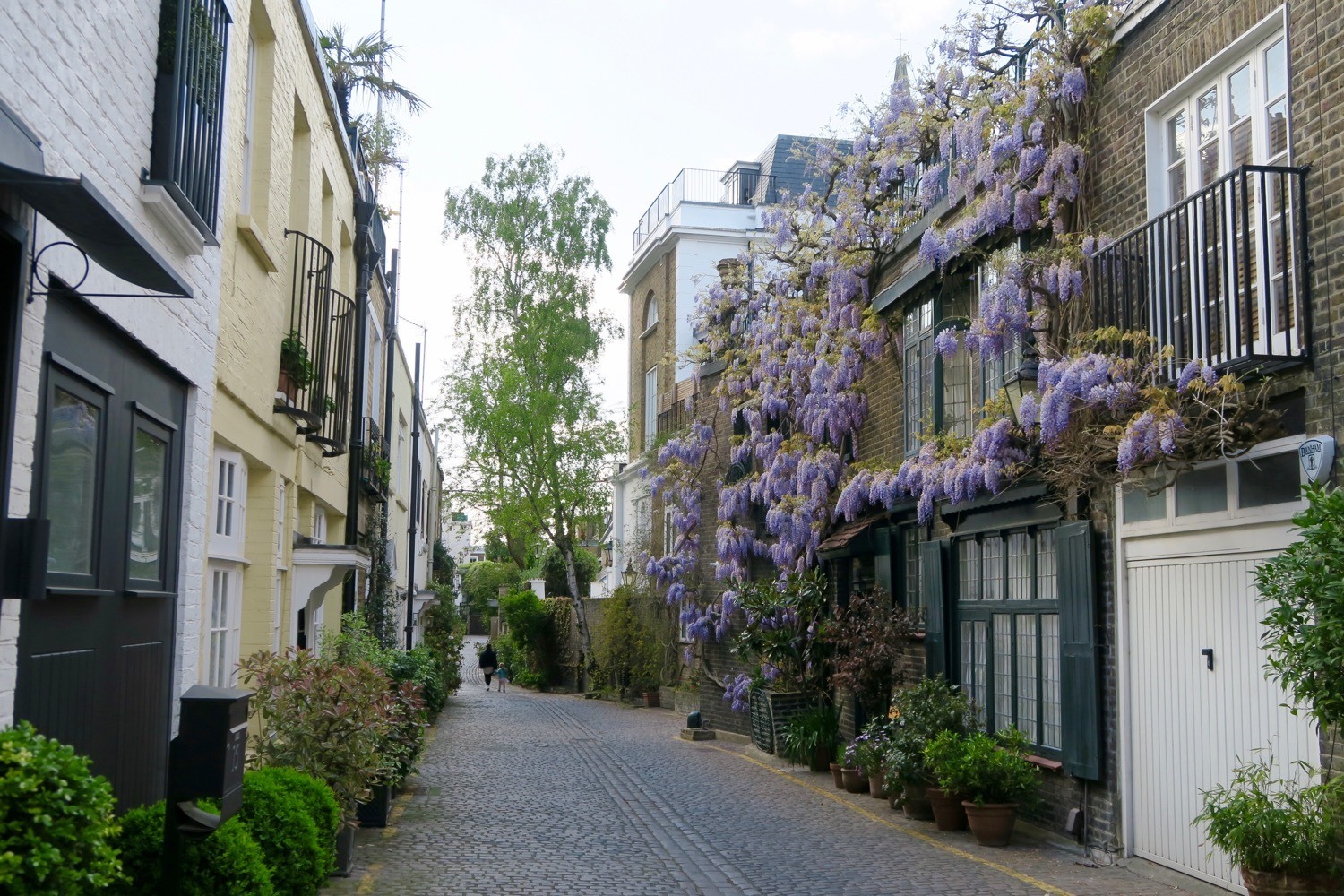 Kynance Mews is, without a doubt, one of the prettiest places to see wisteria in London. This mews (a mews is a row or street of houses that have been converted by stables or made to look like former stables) is beautiful at any time of the year, but in spring and autumn it really comes alive with colour.

Another absolutely beautiful stop if you’re looking for wisteria in London. I imagine this street has one of the most photographed doors in all of London, especially in spring. And yes, I felt a bit bad taking a photo of somebody’s front door… but c’mon now. They painted it PINK. 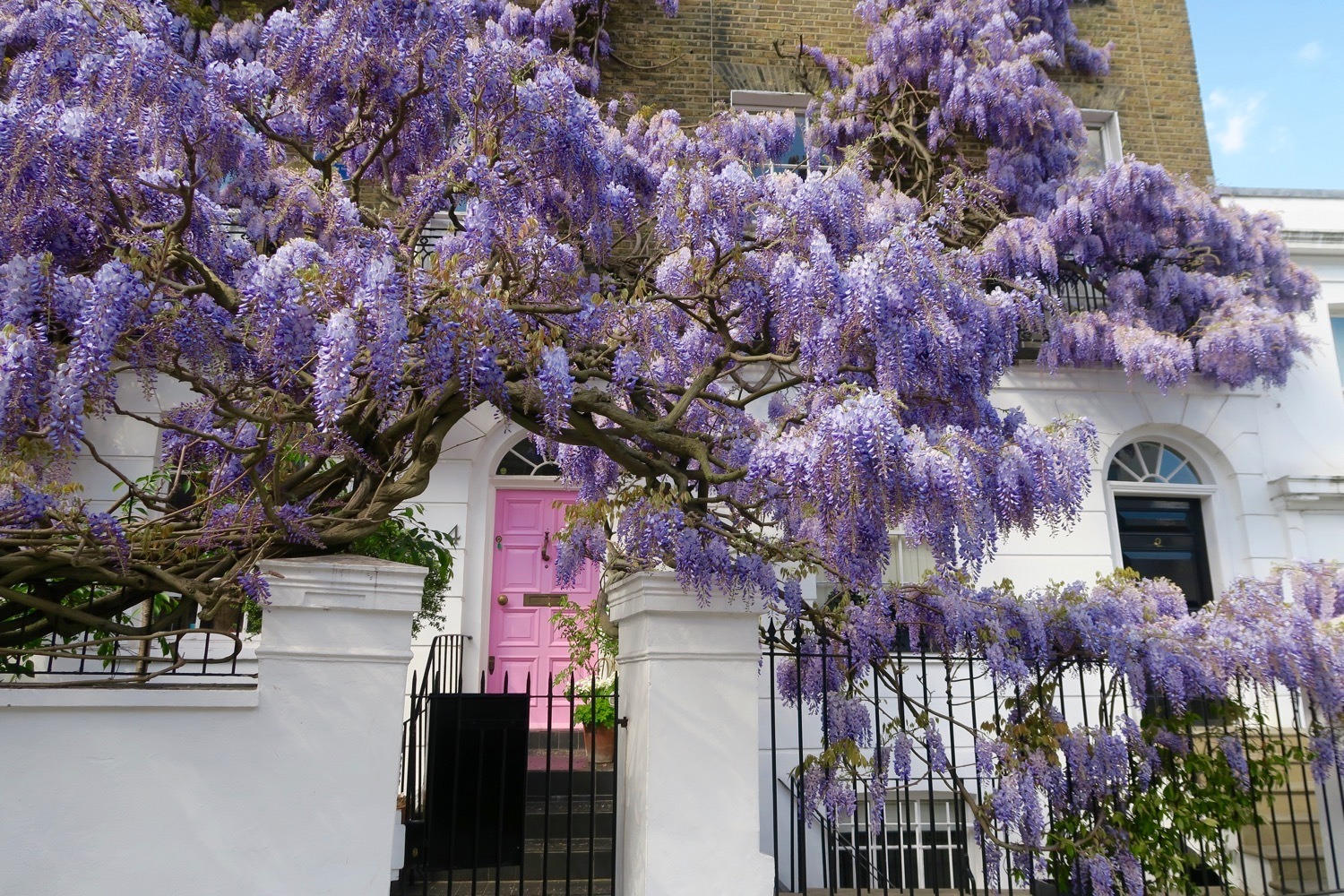 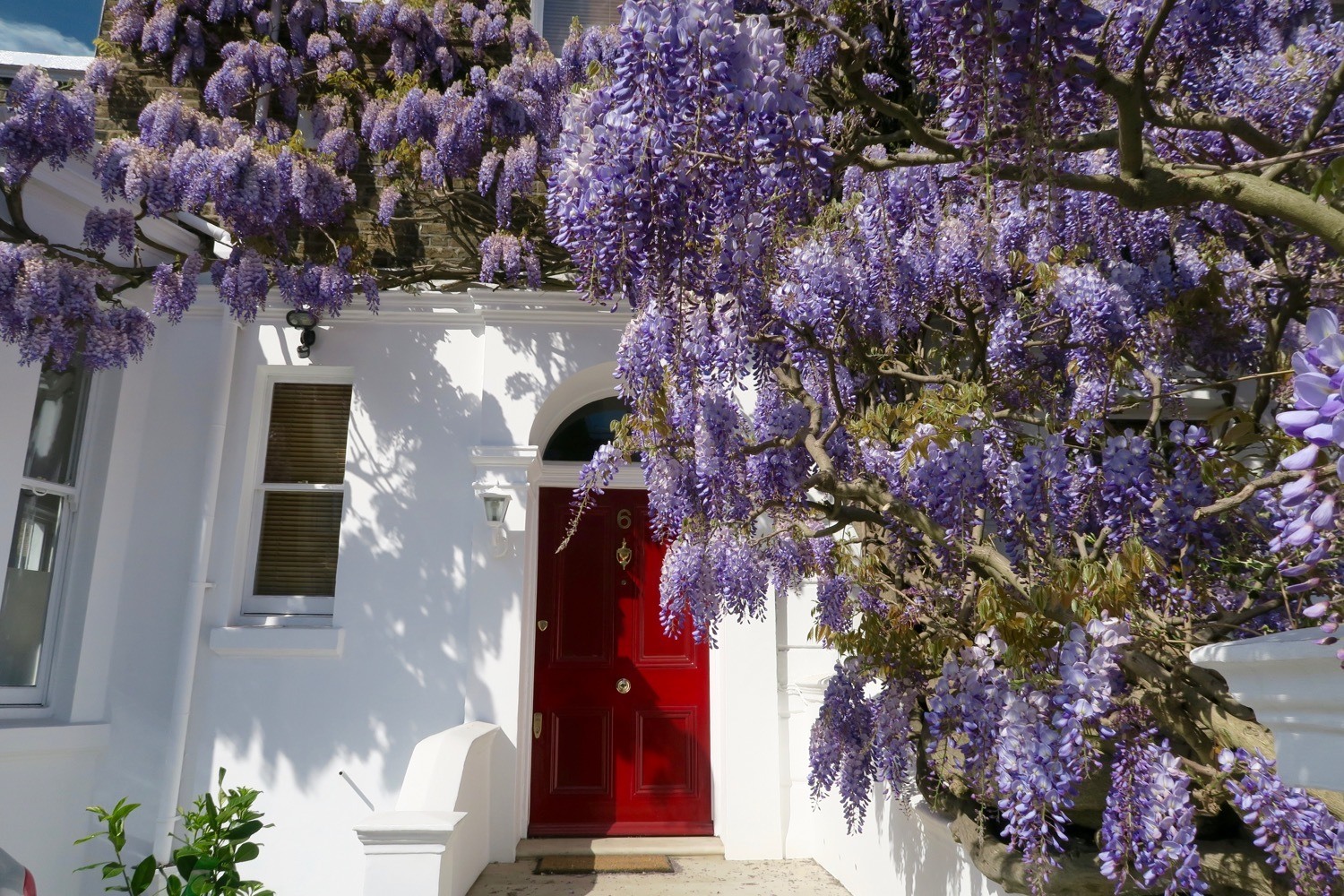 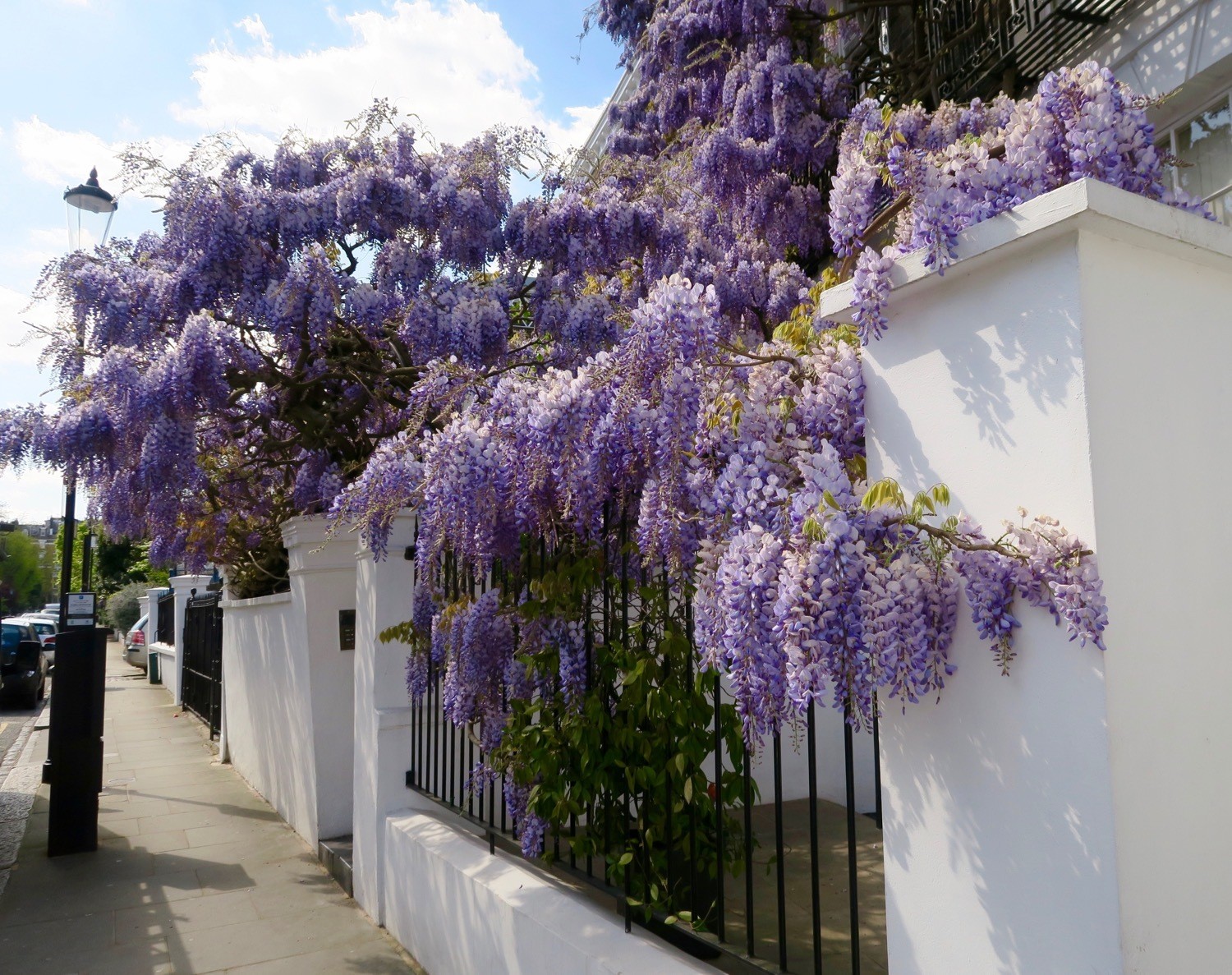 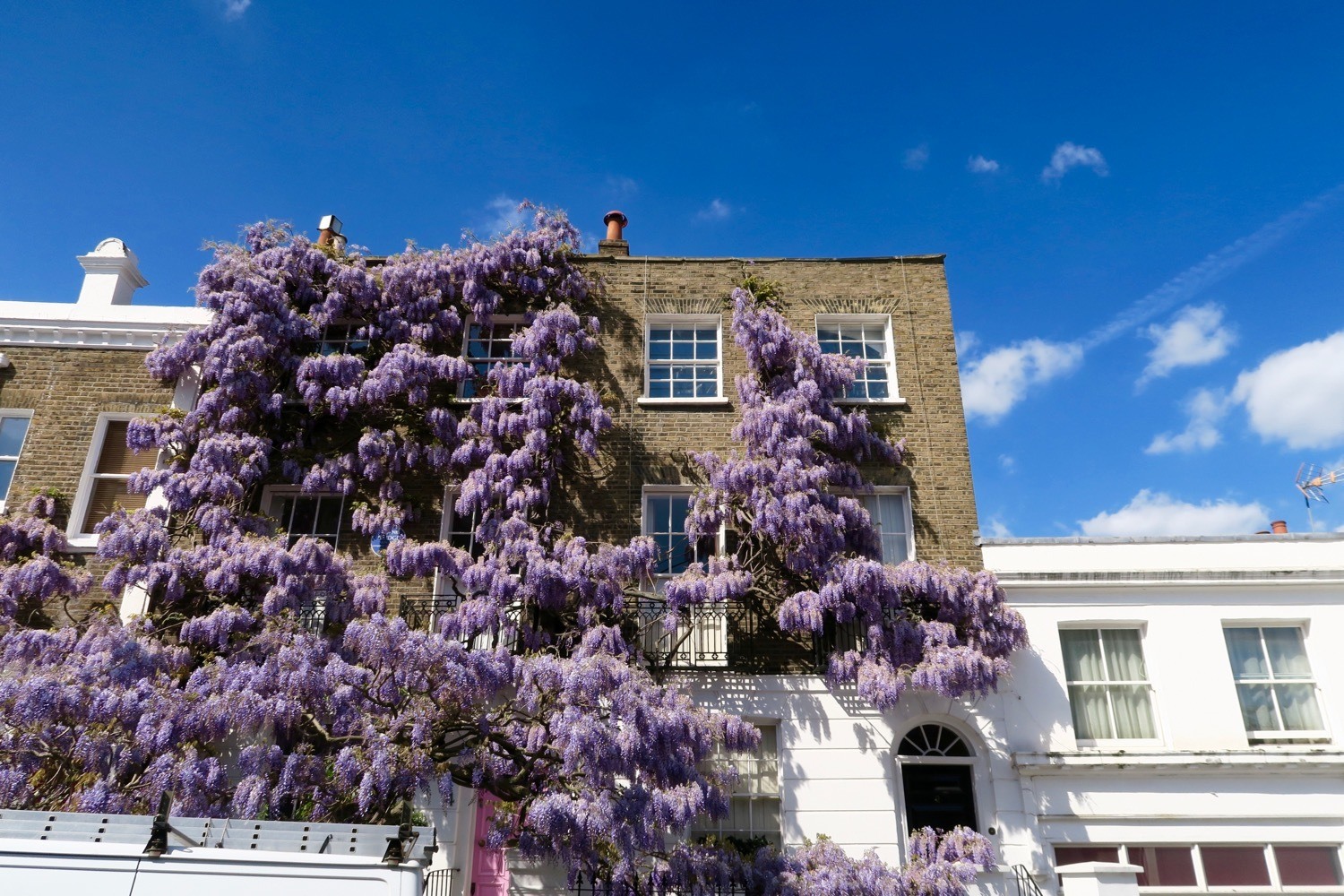 Not as quaint as the other streets on this list, Sumner Place is still a fantastic place to see wisteria in London. It is one of those fabulously posh streets that I’ve only ever experienced in West London. 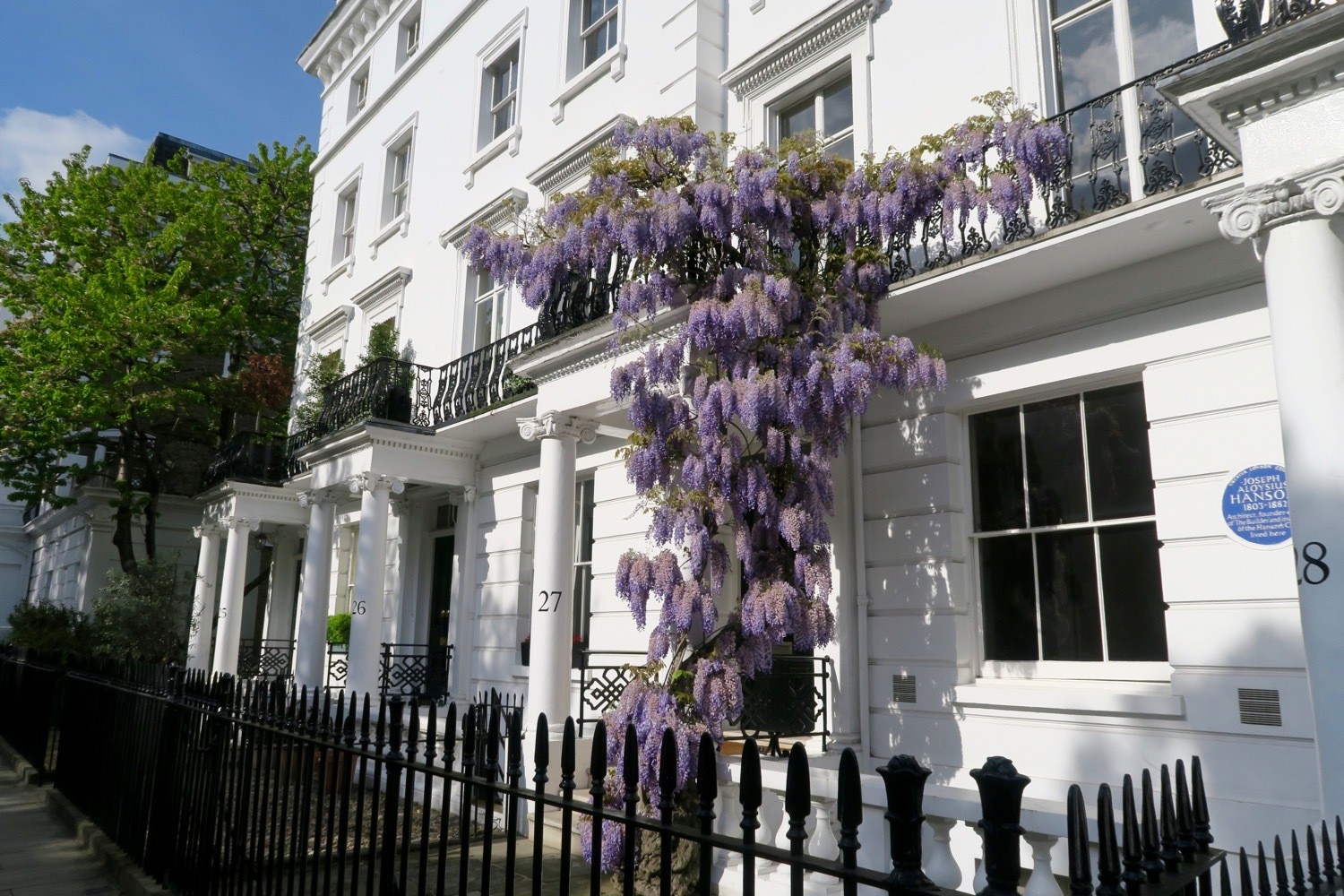 Another must-see if you’re looking for wisteria in London. This is also one of the most photographed streets in London in spring, and it’s certainly not difficult to see why! 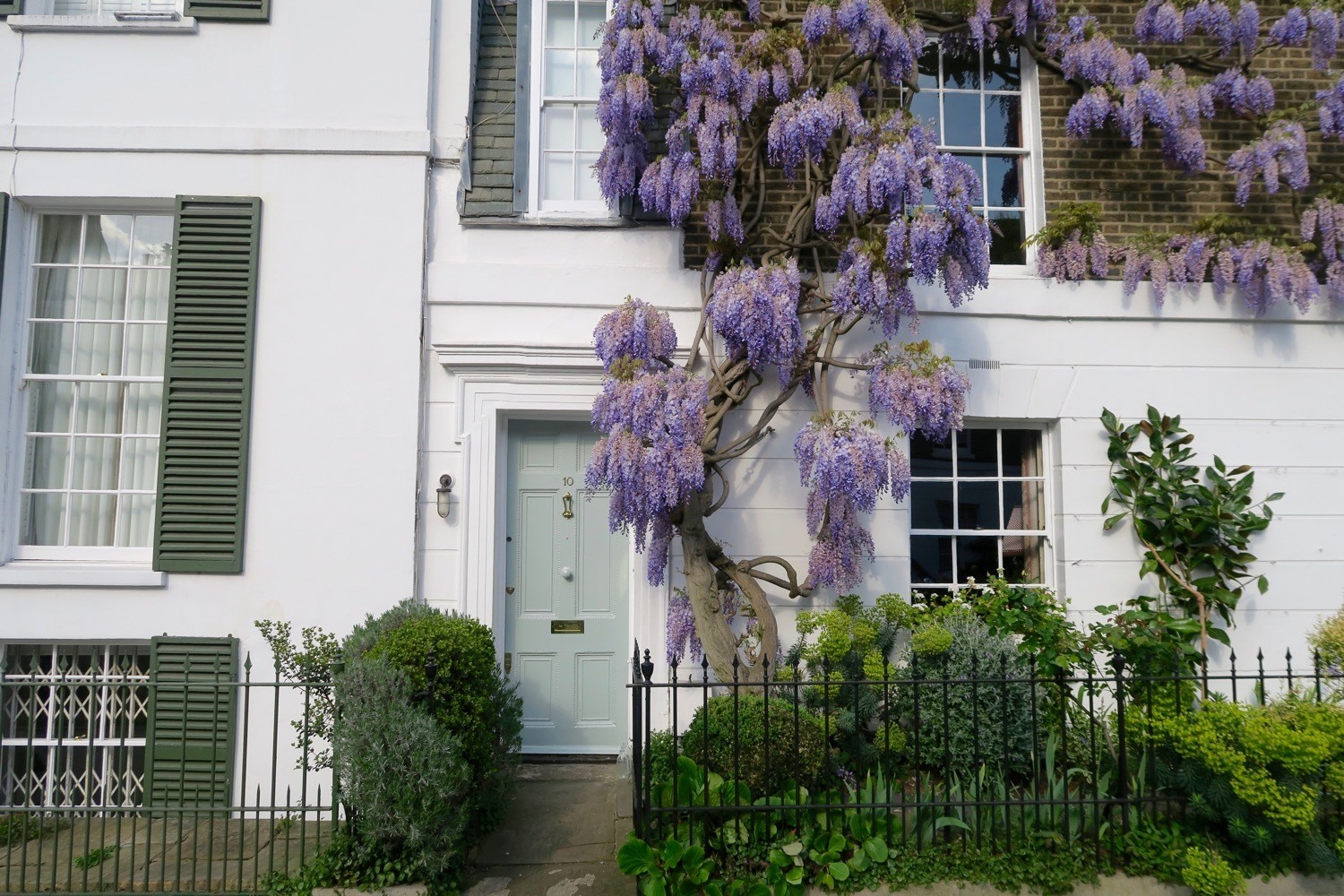 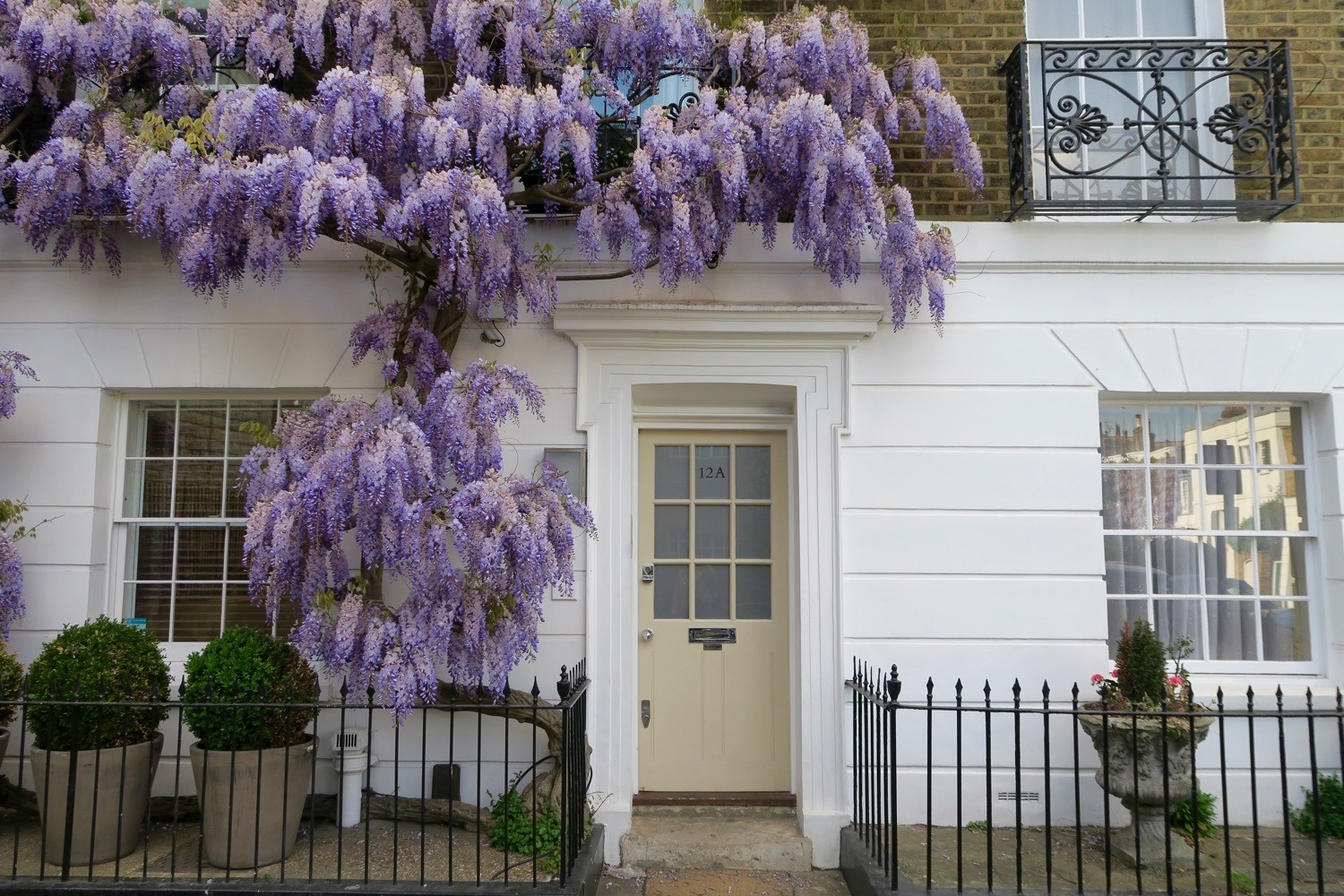 Other places to see wisteria in London: 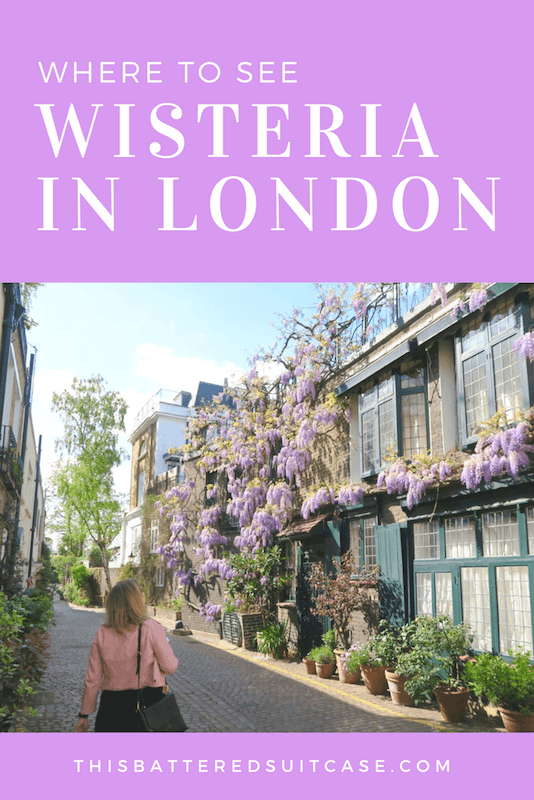 Have you ever seen the wisteria in London before? Do you often seek out spring flowers, autumn leaves, etc. to photograph?

Sailing to Colombia From San Blas

Birthdays And Bicycles In Luang Prabang

Walking On The Edge

Should We Put Down Our Phones?

Things to Do in Swan Valley, Manitoba

What a lovely post for a Monday, thank you.

I’m glad you enjoyed it!

Isn’t it the prettiest?! I have a wisteria tree growing up the side of my house, and its amazing every year when it blooms. Oddly, it’s always about a month later than when they appear in London though!

I would love to have a wisteria tree in my yard! It’s so beautiful…

does it only grow well in the South,how about Midlands?

Ahhhh I love this! Really hope I can see these in person some day soon 🙂

Thanks, Christine! I hope you get to see it soon, too 🙂

How beautiful! I would love to see it one day 🙂

We should explore London in the spring together sometime 🙂

It is indeed beautiful in London in spring! 🙂

Great guide thanks for sharing

I’m a girl who’s obsessed with flowers so seeing this is making me all kinds of happy. I love everything about them from the color to the way they’re placed. I definitely have to visit someday.

I would love it if I could have those flowers in front of my house. They’re beautiful.

I’m sorry but I’m gonna need one for my front porch ASAP.

When is it best to visit ? Some sites are saying end April into May while others are saying May. Which would be the best? Is mid May ok ?