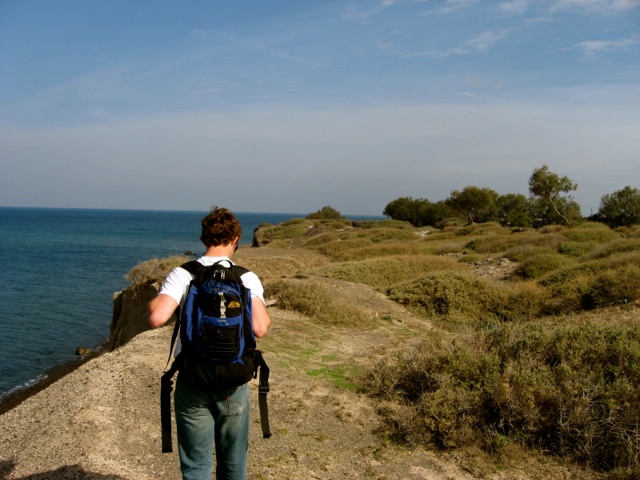 Like every morning, I brace myself before opening the door. I only recently moved back to this city, and the -40 degree winter weather is something I will never (and can never) get fully used to. A quick inventory of my purse assures me I have everything I need for the day: keys, wallet, phone, lunch. I wrap my wool scarf up high over my face, pull on my mittens, and set out.

Like every morning, I am thankful that I work only a few blocks away, as within minutes, the frigid air and harsh wind have caused my eyes to water. Despite my layering, a chill is already creeping in under my coat, inciting me to walk just a little bit faster. I look like all the other faceless, genderless people on the sidewalks today: big boots, thick jacket, head down, body hunched forward against the wind.

Like every morning, I allow myself to dream of faraway lands I once knew, of Thai beaches and Bornean jungles, of hot summer days in Barcelona or muggy nights in the Caribbean. I remember a day I spent in Greece nearly six years ago, with a man who would eventually break my heart. We had spent the week on the island of Crete, eating olives by the sea, chatting with fishermen, and walking up and down the walled harbour of Chania. From there, we had sailed to Santorini, lured by the glossy photos of white villages and red beaches. Unfortunately, we were a few months too late for the supposed Mediterranean paradise, and were met with stormy skies and closed shops. Refusing to let this hinder our romantic plans, we forged ahead anyway, shivering at the tables of seaside tavernas, running and screaming into freezing ocean waves, and hitchhiking to even smaller and even more deserted towns than the famed Fira where we stayed.

One day, after a greasy breakfast in our little guesthouse, we decided to head to Oia, which was further along the cliffs but just as picturesque. We took a small bus that rattled along the winding roads; we were the only tourists on board. Just as empty as Fira, we climbed down the cliffs to the ocean, eating a picnic and throwing rocks into the ominous waves. Dark clouds hung frighteningly low in the sky. “Should we think about heading back?” my companion asked me. I could hear the worry in his voice. Stupidly, we hadn’t even checked to see when a bus might be able to take us back to Fira, so we quickly scrambled up the rocks, heading straight for the tiny parking lot where we had been dropped off. We tried to ignore the fact that the sky was now nearly black despite it being only four in the afternoon.

Once in the parking lot, we were met by a raucous group of donkeys and not much else. Images of riding one of these braying animals all the way back to Fira filled my head, and I alternated between seeing the image as hilarious and horrible; either way, I thought, it would make for a good story. Finally, an old man with very limited English informed us that there was no bus for another hour, but with no terminal or even a bench to sit on, we ventured back into town to kill the time.

Two cappuccinos later, and with 15 minutes still to spare, we took one last walk along the main path in town, stopping to take photos of sleeping dogs and fuchsia-coloured flowers against whitewashed stone. The dark clouds were still rolling in, and though the rain hadn’t started, the winds had now picked up so much that we could barely hear each other over the noise. We stood overlooking the ocean, laughing at how crazy we looked, jackets blown open and hair standing on end and backpack straps whipping around our bodies. We yelled into the wind, and the wind yelled back. We shouted obscenities just because we could. We hooted and hollered and the wind echoed us, howled louder and louder until I could no longer hear my own voice. Overcome by the moment, emboldened by the wind, I professed my love for my companion, not knowing if he could hear me at all. He was smiling at me, and speaking to me, and I’ll never know if he understood me, I’ll never know what he said; the wind carried his response away, over the Mediterranean and into the churning waves.

A gust of wintry wind takes me back to the present, and I tense with cold. But no matter; I’m almost at work, I’m almost out of reach of the wind and all its secrets.

How To Make Friends In Nepal

So dreamy, and i feel you on those cold canadian winter mornings. they are ROUGH.

This is one hell of a travel narrative, I loved it!!! No pictures necessary.

Move to Toronto. The winter here this year is very mild. We don’t even have snow!

This is lovely Brenna. Simply Lovely

Thank you so much, everyone! I really appreciate your comments.

Christine – I spent a winter in Toronto once and it was brutal! I haven’t had a Winnipeg winter in ten years so it sometimes feels extreme, but luckily it has been very mild the past few days…

BRENNA i got tingles at that last sentence.

Thank you so much!

[…] no stranger to travel romances. I had one major one in Europe when I was twenty-two; another travel fling had turned into a full-blown relationship that lasted for a year at […]